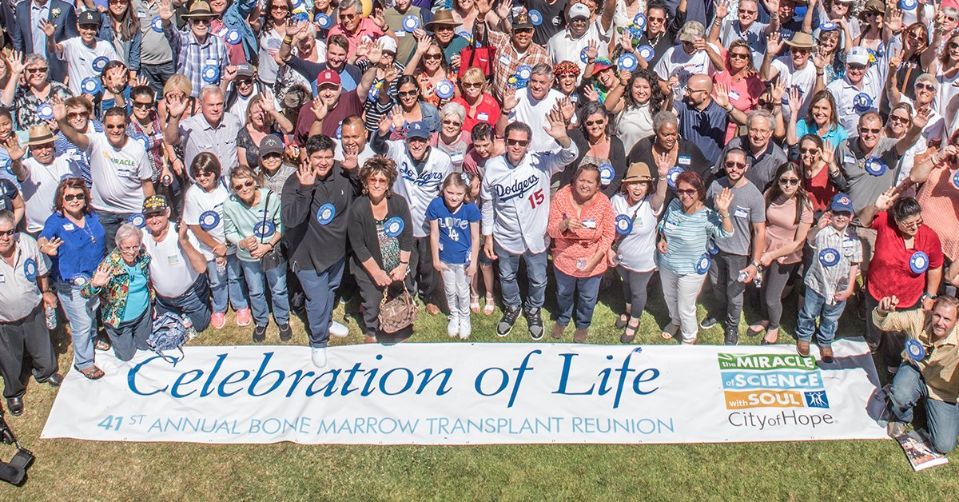 City of Hope’s bone marrow transplant program recently performed the procedure on its 15,000th patient, a remarkable milestone considering that the initiative started with just two physicians, three beds and guarded expectations in 1976.

Forty-three years ago, a young college student from Indiana was admitted as a patient and became the hospital’s first successful bone marrow transplant.

In October of that year, the student, then 27, received the devastating news from his physician that he had acute myeloid leukemia (AML). In those days, an AML diagnosis was grim. Bone marrow transplantation (BMT) as a cancer treatment was still primitive and not in wide practice. At the time, City of Hope was one of only six medical centers in the United States offering it.

The student’s doctor advised the young man to get his affairs in order, and he broke the devastating news to his family. It was a cousin, a doctor living in Los Angeles, who told him she knew of a cancer treatment center in nearby Duarte that had just launched a program for BMT.

Trusting his cousin’s advice, the young man came to City of Hope for a bone marrow transplant. His eldest brother was selected as a match. He underwent a BMT as a patient of Karl Blume, M.D., who established the BMT program at City of Hope in 1975 with Ernest Beutler, M.D. Standard treatment in 1976 meant he would endure very high doses of chemotherapy followed by three-hour nonstop sessions of full-body radiation (today, targeted radiation is administered in short sessions over a matter of several days). Following the transplant, he then spent a month in isolation.

His cancer in remission, he returned to school to complete a degree in computer science. The student was one of City of Hope’s longest-surviving BMT patients, for 35 years. He would remain in remission for the rest of his life, passing away in 2011.

Since then, City of Hope’s laboratory and clinical researchers have led the way in making transplants more effective and safer, with fewer side effects. Having performed 15,000 transplants, from just six in 1976 to over 800 last year, ours is now one of the largest and most successful programs in the United States. Today, we have the most prodigious BMT program in California, with 720 annual transplants, on average. It is one of the three largest programs in the country.

As for other patients who have made an impression among the thousands treated over the last four decades, “They all are memorable for me,” said Stephen Forman, M.D., the Francis & Kathleen McNamara Distinguished Chair in Hematology and Hematopoietic Cell Transplantation, who came to City of Hope in 1978 specifically to work with Blume and help develop the new BMT program. “I believe that there’s an inspiring story in every person’s life. You just have to pause, listen, watch, help — and you will be privileged to be part of it.”

The advent of BMT marked an important step forward in the battle against leukemia, lymphoma and other diseases of the blood and immune system, and City of Hope has played a crucial role in the advancement of the procedure. The therapy establishes a new, disease-free blood and immune system by transplanting healthy blood stem cells into the body after destroying the patient’s unhealthy bone marrow. In the first procedures, stem cells were collected exclusively from a matched donor’s bone marrow. As medicine advanced, two difference sources for stem cells were discovered: peripheral blood (from the bloodstream) and umbilical cord blood. An autologous transplant uses stem cells from the patient’s own blood.

When the program started, because of the physically challenging nature of the procedure, transplants were rarely performed in patients over the age of 30. Now, with refinement of the technique, “We no longer have age as a barrier,” Forman said.

City of Hope was one of the first institutions to do BMTs in people over the age of 50 by developing an approach based on the idea of a reduced intensity, or “mini” transplant. This breakthrough method relies less on heavy doses of chemotherapy and radiation and more on the antitumor effects of the graft itself (called the graft-versus-tumor effect).

“Given that many of the diseases that we take care of are diseases of older people, being able to transplant patients successfully in their 70s is a huge innovation,” Forman said.

Becoming One Of The Best

In addition, City of Hope was one of the first places to show that BMTs could be safely performed on patients with HIV (we treated our first patient with AIDs-related lymphoma with BMT in 1998.) Today, BMT is sometimes used to treat selected solid tumors as well as numerous nonmalignant diseases, including genetic disorders such as sickle cell disease and autoimmune diseases such as lupus, scleroderma and multiple sclerosis.

With growing success with nonrelated matched donors and, most recently, partially matched donors, BMT is saving more lives than ever before.

“One of the biggest innovations derived from research is the ability now to do transplants from half-matched family donors,” Forman said.

This development has greatly expanded the pool of people who are eligible to receive bone marrow transplants, particularly among minority patients and mixed-race patients, who traditionally have had more difficulty finding matches.

City of Hope’s BMT program is the only one in the nation that has had one-year survival above the expected rate for 14 consecutive years, based on analysis by the Center for International Blood and Marrow Transplant Research. It has earned accreditation by the Foundation for the Accreditation of Cellular Therapy, considered the standard of excellence for blood and bone marrow transplant programs in the United States.

Looking forward, our BMT program is focused on minimizing the side effects of the procedure, increasing its effectiveness and expanding its reach. These include clinical trials of a City of Hope-developed vaccine for cytomegalovirus (CMV), a common and potentially deadly infection following transplant, and incorporating CAR T therapy, an immune-boosting treatment used either before transplant to put the disease into remission or after transplant to help prevent recurrence. (Even before the current vaccine trials, City of Hope was the first to develop a treatment for prevention of CMV infection after transplant, which has nearly eliminated the threat of CMV for BMT patients.)

“What’s really differentiated our program is all this is wedded to a deeply humanistic vision of delivering care to the patient,” said Joseph Alvarnas, M.D., associate clinical professor in the Department of Hematology & Hematopoietic Cell Transplantation at City of Hope.

“We have a system in which not only do you have hematologists caring for their patients, but you also have them partnering very carefully with members of supportive care medicine, from palliative care physicians to social workers to psychologists — and all of those things create a much more grounded, human-centered vision.”

The “Celebration of Life” BMT reunion is an annual highlight at City of Hope, bringing together more than 4,000 attendees each year, a tradition that began 43 years ago. This year’s reunion will be held on May 10.

“It can be somewhat overwhelming if you think about it: 15,000 transplants!” Forman said about the program’s profound evolution over the last four decades. “I only stop and think about it when someone asks me about it. I forget how long it’s been and how much we’ve accomplished. My focus is, ‘What does this patient need today?’ There’s a thrill when you see the possibilities of what you can do for someone that you couldn’t do before. It’s very inspiring.”