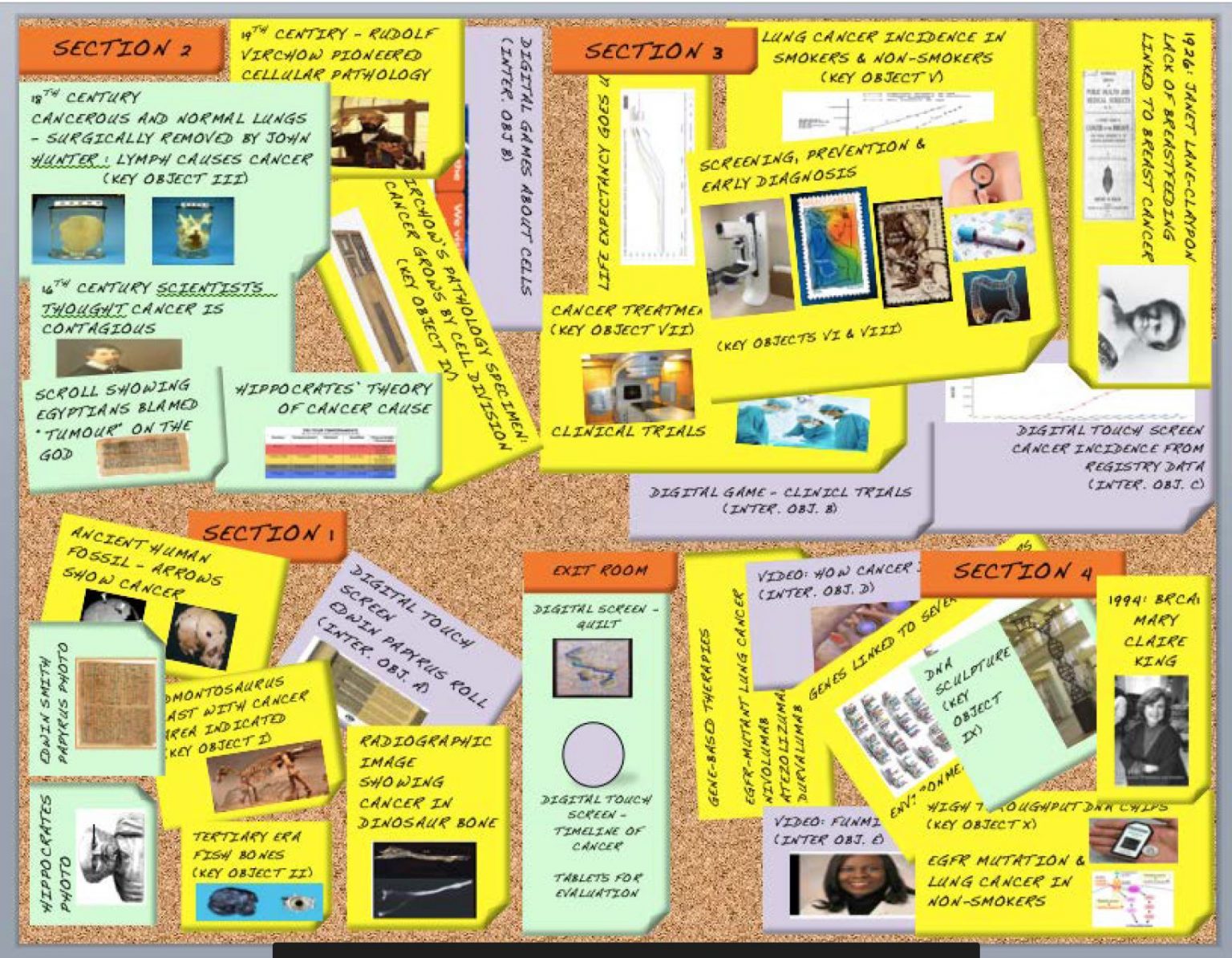 Museum Exhibit: The History of Cancer

Jaya M. Satagopan, PhD, is a full member in the Cancer Prevention and Control Program at Rutgers Cancer Institute of New Jersey and professor in the department of Biostatistics and Epidemiology at the Rutgers School of Public Health. Between 2016 and 2019, Dr. Satagopan completed her Master’s degree in science communication and public engagement from the University of Edinburgh. As part of this degree, she completed a project to curate a museum exhibit to communicate the history of cancer.

Cancer is a disease that develops when normal cells in a particular part of the body grow out of control.

How old is cancer? Is cancer a fate of modern humans due to behaviors such as cigarette smoking?

The free exhibition explores these questions. Starting with a gallery introduction, four sections will showcase the information summarized below using primary and secondary panels and object labels. Recorded music performed by two cancer statisticians will play in the background (Kosorok 2018, Banerjee 2018).

The oldest description of cancer goes back to 3000 BC in ancient Egyptian medical treatise known as the Edwin Smith Papyrus, although the word cancer was not used (Breasted 1991). The word cancer dates back to Hippocrates (460-370 BC).

Ancient Egyptians blamed cancer on the gods. Hippocrates theorized that an imbalance in bodily fluids led to cancer (ACS 2014), which remained unchallenged until the 16th century when scientists believed cancer to be a contagious disease.

Our understanding of blood circulation during the 17th century and surgery to treat cancer during the 18th century led to the theory that cancer grew from the lymph, a bodily fluid, thrown out by the blood (Bodell 2014).

During the 19th century, pathologists used microscopes to study cells in normal and cancer-affected human tissues extracted by surgeons, popularizing the theory that cancer grew from cell division (Underwood, n.d).

Global life expectancy increased from age 34 in early 20th century to age 72 by late 20th century (Roser 2018). Countries established cancer registries to monitor the health of the population. Registry data showed that cancer incidence (the number of new cancers divided by the number of people alive in an age group) increases with age (Thakkar et al 2014).

Screening tests for early detection of certain cancers (CDC 2018) and methods to diagnose, treat and prevent various cancers were developed (ACS 2018a, 2018b). Clinical trials became the global standard to develop new treatments.

Section 4: The Era of Cancer Genomics

Watson and Crick’s (1953) description of the structure of DNA marked the beginning of the era of cancer genomics.

I. Cast of dinosaur species Edmontosaurus indicating cancer sites, to be developed in collaboration with Bruce Rothschild (Rothschild et al 2003).

IV. Pathology slides of normal and cancer tissues, from the Berlin Museum of the Medical History, c.1838 (Berlin, n.d).

IX. DNA sculpture by artist Tom Otterness, from the University of Florida (Otterness 2007).

C. Digital screen to query and view the incidence of different cancers from registry data in the USA (SEER 2018).

E. Video of Nigerian-American Funmi Olopade talking about breast cancer prevention and her career as a cancer researcher (Olopade 2009).

A digital screen will feature a quilt of the oestrogen receptor, a breast cancer gene, and pamphlets containing instructions to make the quilt, with permission from the artist and statistician Susan Hilsenbeck (2016). The centre of the room, like in most cells, will feature a nucleus with 4 digital touch screens showing the timeline of cancer. Feedback will be obtained using two digital screens placed by the exit door and via Twitter using the event hashtag #HICAN.

The word cancer evokes fear in many people. There are several myths about cancer: (i) cancer is god’s punishment; (ii) cancer is contagious; (iii) cancer is an individual’s fate and not preventable; (iv) cancer affects only the wealthy and elderly in developed countries; and (v) a diagnosis of cancer is a death sentence (Lancet Oncology 2013).

Sustained advances in cancer research and our understanding of the history of cancer provide significant opportunities to capitalise upon the shifting perceptions and instil positive change. The goal is for visitors to leave the exhibition with the feeling “I can see the long history and science behind cancer” i.e., “#HICAN”.

To this end, the proposed exhibition views the issues of myths, taboo and stigma from the vantage point of a visitor (Falk and Dierking 2012) by giving a historical spin to these issues. The exhibition disseminates information about the evolution of our knowledge of cancer, its history and disease management techniques using various objects and interactive materials, including the arts.

People love dinosaurs (Switek 2014). Therefore, starting the exhibition with cancer in dinosaurs provides an instant hook to get visitors involved and interested (Falk and Dierking 2012) and can leave a lasting impression by creating an affective experience (Learn.5 2018).