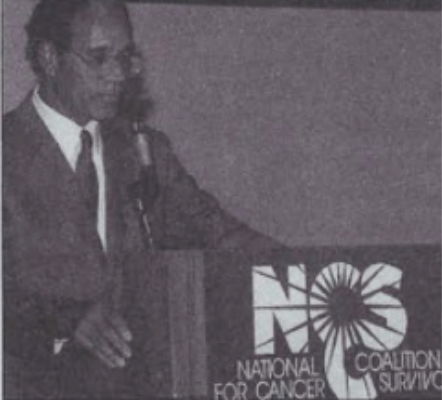 This interview with Harold Freeman, the founder of patient navigation, was originally published in the NCCS Networker Volume 8 Issue 4, Winter 1994, which is available as a PDF download here, and is reproduced digitally below.

The rates of cancer incidence and death run higher for minority groups than for whites. Why is that so?

Poor Americans have a 10–15% higher cancer mortality rate. This is related to what poverty means. Poor people tend to have substandard housing, low educational levels, and a risk–promoting lifestyle characterized by high smoking rate, high alcoholic intake, and high–fat diet. Poor people also have diminished access to preventive and early healthcare. Poverty and cancer therefore are usually a lethal combination.

Poverty does not respect race. Any group with inadequate income, housing, and education will suffer a higher death rate, whether they‘re white Appalachians, Black New Yorkers, or any other group.

That‘s a major point. If the disparity in survival rates was primarily due to race in itself, that would drive a different solution to the problem. We‘d probably need to explore molecular biology or genetics for solutions. But clearly the major disparities in outcome between races are due to social factors, which suggests a different approach.

Poverty is not a problem that affects only a certain segment of society. It concerns everybody. Many middle class people—whites, Blacks, and others—become poor. Anyone could lose their insurance or their job, or both. Few people could miss 2 consecutive paychecks without potentially severe consequences, such as loss of health coverage. We should therefore not see the poor as “others.” We should see reflections of ourselves in the eyes of the poor.

Of course, race and racism influence cancer outcome. If you grow up as an American Indian, you have a devastating history. If you‘re Black, you have emerged from a long history of slavery and legalized segregation. The history of a people is a powerful determinant of their current social and economic status.

We can‘t change history, but we must be very sensitive to it and not sweep it under the rug. We must also be aware that, despite much progress, we have not yet achieved a completely fair society. But the effects of racism on Native Americans and Black Americans is related more to the momentum of history, as opposed to current race relations.

Certainly, living as a Black American today has to be less onerous than living under slavery or legalized segregation. But 250 years of slavery followed by 100 years of legalized segregation has been a powerful determinant of current conditions. It is also true that changes in laws do not necessarily change the hearts and minds of people.

Successful racial and ethnic groups don‘t achieve prosperity in one generation. You probably can‘t catch up in 30 years. African–Americans are not doing as well as the majority today. They tend to have less access to healthcare and tend to be uninsured. These are not accidents. They are historical developments.

Poverty and racism are two distinct, destructive elements in American life. Therefore it is necessary to separate the strategies we use to fight poverty from those we use to fight racism. If you confuse those issues you will confound the solution. Certainly we need to fight racism. Whenever you find unfairness toward any group you must fight it. On the other hand, poverty is a universal phenomenon. It affects people irrespective of race. When you fight poverty, you‘re fighting a humanitarian battle for all people.

How can we begin to untangle the net of poverty and cancer?

First, we should understand that poverty is not a hopeless condition and that we can help people deal with it. Too many people lack insurance or access to care; a humane society should feel compelled to address that. The nation, the taxpayers, won‘t save money by not treating people who have cancer. In fact, we will lose money. A person with cancer who is untreated early will enter the hospital late, need longer–term and more expensive treatment, and will likely die. Early diagnosis and treatment saves lives, and money as well.

We know a lot about preventing and treating cancer. We need to apply what we already know to all segments of society. About 50 percent of those diagnosed survive cancer now. If we universally applied our knowledge, 75 percent would survive.

Harold Freeman, MD, chairman of the President‘s Cancer Panel, received the NCCS Public Leadership Award at the 1994 Assembly. Throughout his career, Dr. Freeman has distinguished himself internationally as an eloquent advocate for minorities, the poor, and the medically underserved. He serves as director of surgery at Harlem Hospital Center in New York.

My Duke Cancer Story: A Champion for the Underserved

The State of Cancer Care in America 2014: A Report by the American Society of Clinical Oncology