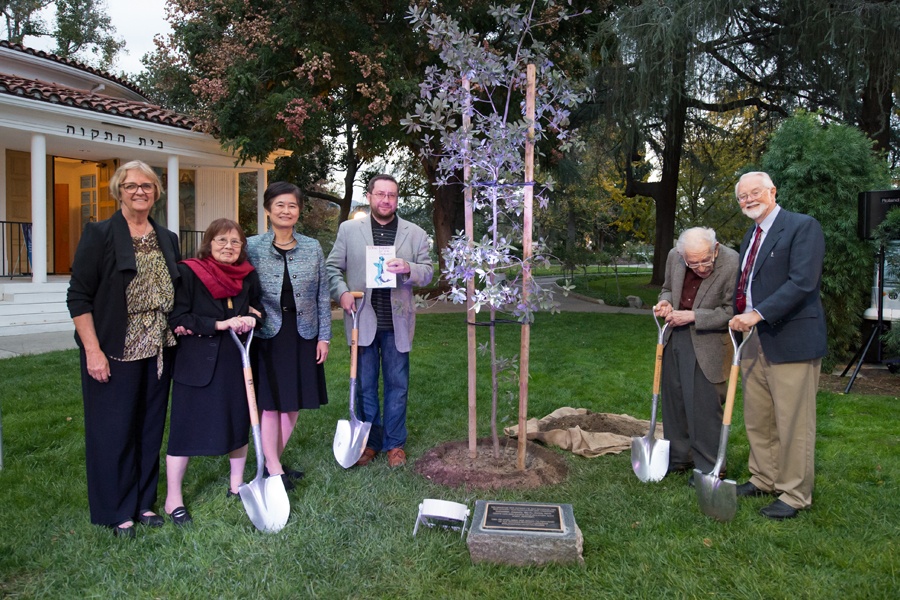 City of Hope’s rich history is filled with stories of celebrated researchers who helped shape the course of modern medicine.

But lesser known are the stories of the Japanese-American scientists who came to City of Hope and contributed greatly to the advancement of cancer and genetic research, helping the institution develop into the internationally renowned center it is today.

And though decades have passed since their arrival, one City of Hope scientist is making sure that their contributions are not forgotten.

Yoko Fujita-Yamaguchi, Ph.D., professor emeritus in the Diabetes & Metabolism Research Institute at City of Hope, has written a book in Japanese that delves into the contributions of Japanese-American scientists at City of Hope. Her next step: working closely with Steve Novak, former director of City of Hope’s graduate program and a trained archivist, to write a version of the book in English.

“A tremendous amount of history was made by two distinguished City of Hope scientists, Dr. Riojun Kinosita and Dr. Susumu Ohno, but few people know about it,” Yamaguchi said. “We do not want their contributions to be forgotten. We want to pay homage to what they did and how they helped advance cancer and genetics research.”

Before he became head of the newly formed City of Hope Cancer Research Institute in 1952, Riojun Kinosita, , M.D., Ph.D., a Japanese native, was already well-known for his groundbreaking research on carcinogens. In the 1930s, chemical procedures had evolved so that individual compounds could be linked to cancer. But little was known about direct links until researchers such as Kinosita conducted research on the topic.

In 1936, Kinosita reported that something known as butter yellow, a chemical used to color food, induced cancer in the liver of rats when it was taken with food. In 1939, Kinosita was invited by the prestigious Jane Coffin Childs Memorial Fund for Medical Research to deliver a lecture titled “Studies on the carcinogenic compounds” at Yale University School of Medicine.

American newspapers reported on Kinosita’s visit to the United States in 1948 to give lectures about his research. At the time, World War II had just ended and anti-Japanese sentiment was still strong. But Kinoshita, president of the Japanese Cancer Society, was given a passport to the U.S. to present his findings to cancer experts through a special arrangement made by the American Cancer Society.

Yamaguchi meticulously searched for articles about Kinosita’s lectures in newspaper archives. She found them and keeps them tucked away in a folder, with the hope to include them in the English-language book.

In 1952, City of Hope and the UCLA medical school combined forces to launch a joint research effort at City of Hope’s Duarte, California, campus. Known as the Cancer Research Institute, the fledging operation quickly attracted progressive scientists such as Kinosita, who had worked at UCLA and came to City of Hope to lead research efforts.

Kinosita’s impact was swiftly felt. In fact, a small basic research unit that he started in 1952 has since grown and earned international renown. It became the City of Hope Beckman Research Center in 1982.

As head of the Cancer Research Institute in 1952, Kinosita recruited a young researcher, Susumu Ohno, who was born to Japanese parents in Korea. Ohno was a young postdoctoral fellow at the time, but his research would also make waves in the scientific community.

In the 1978 obituary for Kinosita, Ohno wrote, “He shall long be remembered for his brilliant series of experiments that proved that a number of azo dyes were hepatocarcinogens of varying strengths (1932 to 1937)” and “As professor of pathology first at Hokkaido and then at Osaka (Imperial) Universities, he cultivated the next generation of leaders in Japanese cancer research.”

Ohno, at that time of his recruitment to City of Hope, held a doctor of veterinary medicine degree and became Kinosita’s last graduate student in 1953. He earned his Ph.D. in 1961 from Hokkaido University.

Ohno had a brilliant career at City of Hope, highlighted by numerous fundamental findings in genetics, epigenetics and molecular evolution. However, he is probably most famous for having written “the book” on evolution by gene duplication. He also discovered the phenomenon of X chromosome inactivation where, in females, one of the two X chromosomes becomes condensed and nonfunctional. As a result, the cells of both males and females have only one functioning X chromosome.

In recognition of these and many other discoveries, Ohno was elected to the National Academy of Sciences and received the Armory Prize for Reproductive Biology from the American Academy of Arts and Sciences. He retired from City of Hope in 1996.

Many of those early leaders have passed away, Riggs said, so it’s crucial that the history be recorded now.

“Yoko is the one who has had the energy to document the history, so we are extremely grateful for her work and passion,” he added.

In addition to the book, the researchers are organizing a special symposium in honor of Kinosita that will take place on Feb. 28, 2018. Panelists will discuss research aimed at understanding how exposure to chemicals and radiation in the environment leads to cancer.

“A lot of the incredibly important discoveries made by City of Hope scientists were made early on in the 1950s, ’60s, ’70s and ’80s, and few people know about them,” Riggs said. “What’s also striking is how well the Jewish community embraced Japanese scientists just a few years after World War II, and how important those scientists were in developing our renowned research department.

“We are forever indebted to them.”

Lori Pierce: Therapies are of no use when patients can’t get off work to be treated