Jim Allison: Breakthrough is the astounding, true story of one warm-hearted, stubborn man’s visionary quest to find a cure for cancer.

Today, Jim Allison is a name to be reckoned with throughout the scientific world — a 2018 Nobel Prize winner for discovering the immune system’s role in defeating cancer but for decades he waged a lonely struggle against the skepticism of the medical establishment and the resistance of Big Pharma. Using intimate interviews with Allison and a set of scientific leaders paired with innovative use of graphics and archival material and featuring music from star harmonica player Mickey Raphael and Nebraska composer Mark Orton, Jim Allison: Breakthrough takes us into the inspiring and dramatic world of cutting-edge medicine, and into the heart of a true American pioneer, in a film that is both emotionally compelling and deeply entertaining.

The director of Jim Allison: Breakthrough is Bill Haney, an award-winning documentarian who is himself dedicated to eradicating diseases that lay their dark grip on families the world over. An inventor and entrepreneur, Bill has founded more than a dozen companies, two of which now develop drugs to cure cancer and neurological diseases. Jim Allison: Breakthrough traces Allison’s remarkable life from his school-boy days in Friday Night Lights, Creationist Texas all the way to Stockholm where, in December of 2018, he accepted the Nobel Prize in Medicine.

Sometimes affectionately referred to as “the Texas T cell mechanic,” Allison’s singular focus on the T cell and its central role in harnessing the power of our immune systems initiated a series of discoveries on T cells’ ability to stop cancer in its tracks. “By stimulating the ability of our immune system to attack tumor cells, Jim Allison established an entirely new principle for cancer therapy,” stated the Nobel committee.

Allison’s effort was tantamount to climbing Mount Everest. When he began his work, immunology was not considered a true science by academicians and traditionalists. Colleagues who respected his intentions thought he was wasting his time. Nonetheless, he followed his star, never forgetting the suffering of his mother, who died of lymphoma when he was eleven years old. “This left a big hole” he quietly states.

Interviews with influential mentors such as G. Barrie Kitto (Director, Center for Biotechnology, UT Austin) and Allison’s post-doctoral student Matthew Krummel (now Professor, Dept. of Pathology, UC San Francisco) enliven the film. At the University of California, Berkeley, where Jim and his group of true believers made important discoveries, he cut an especially colorful figure. “We were like a pirate ship,” recalls Krummel, and Jim was the captain.

In 2004, Allison decided to re-locate to New York. Like a bloodhound on a scent, Allison knew he had to work with major pharmaceutical companies in settings such as Memorial Sloan-Kettering in order to have his research brought to cancer patients. So respected and beloved was he that 90% of his lab uprooted themselves and their families to move to NY with him.

One of the most heart-stopping stories in Jim Allison: Breakthrough is that of Sharon Belvin, whose metastatic melanoma diagnosis at age 22 sent her life into a tailspin. Near-death after months of failed treatment by chemicals, Sharon agreed to participate in a clinical trial of “ipi,” the immunology drug developed from Allison’s idea by his partners Lonberg and Korman. Her tumors soon disappeared; she has now been cancer-free for 17 years.

Filmed in 2018 in various locales around the United States, Jim Allison: Breakthrough also introduces Malinda Bell, Allison’s former wife who called him “the most amazing thing I’d ever seen” when they met at a Sixties fraternity party. Four decades of marriage and one son, Robert, followed. After going their separate ways as friends-for-life, Allison asked scientist Padmanee Sharma to join him in matrimony because “who else obsesses about T cells 24 hours a day.” He tellingly neglected to mention her beauty. The couple makes their home in Houston, Texas where he heads the immunology platform at the University of Texas’s MD Anderson Cancer Center and is director of the Cancer Research Institute. Drugs that followed the pioneering path he blazed have now treated nearly a million patients, saving the lives of hundreds of thousands—a deeply satisfying cause for celebration. 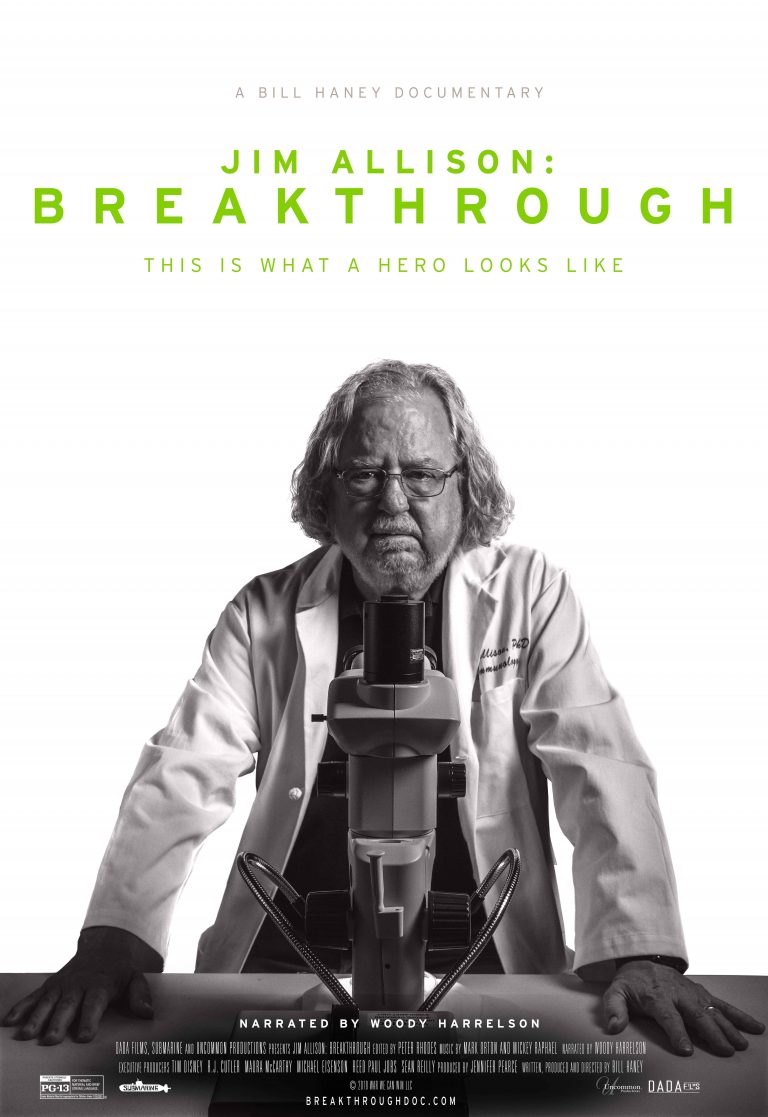 Jim Allison: Breakthrough traces Allison’s remarkable life from his school-boy days in Friday Night Lights, Creationist Texas all the way to Stockholm where, in December of 2018, he accepted the Nobel Prize in Medicine.

A history of The Institute for Drug Development, part of the Mays Cancer Center at UT Health San Antonio

Ellen Stovall: One person can make a difference

Lisa Schwartz, expert in overtreatment and pathbreaking educator, dies at 55

Roswell Park’s role in the National Cancer Act of 1971