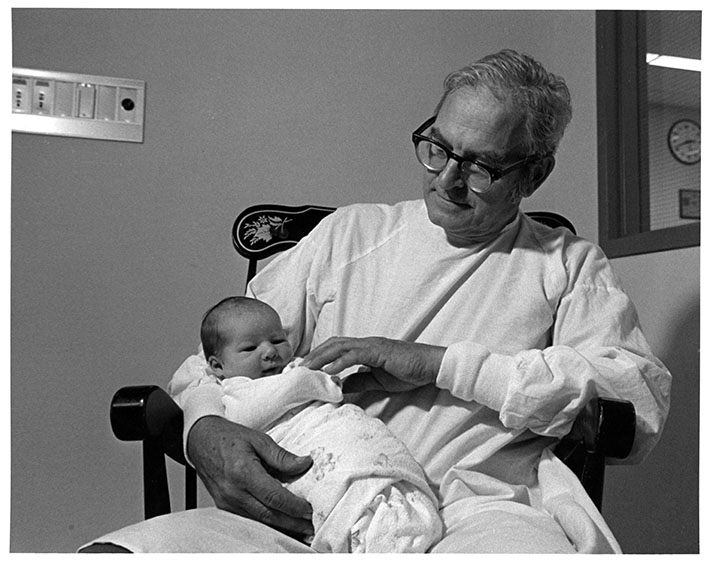 From the day Roswell Park was founded in 1898, we’ve focused exclusively on understanding, preventing and treating cancer. But along the way, our work has led to major benefits for patients with other medical conditions — and created valuable tools for researchers in other fields of healthcare. Here are just five examples.

In 1922, Institute Director Harvey Gaylord, MD, recruited two bright young physicians from Austria — a married couple, Carl and Gerty Cori, who had trouble earning a living wage in their war-ravaged country. After arriving in Buffalo, the Coris began conducting research to find out how the body processes carbohydrates, including glucose, a simple sugar. This process helps cancer cells thrive.

During their years at Roswell Park, the Coris first described what we now call “the Cori cycle,” which explains “how carbohydrates supply energy to muscles during exercise and how carbohydrates are regenerated and stored until needed again by the muscles,” explains historian Judah Ginsberg, PhD. “Their work proved particularly useful in the development of treatments for diabetes.”

In 1947, 16 years after leaving Roswell Park, the Coris won the Nobel Prize in Medicine or Physiology for their discovery.

Creating a Lifesaving Test for Newborns

Almost all newborns in the U.S. receive a “heel-prick test” shortly after birth. A few drops of blood from the baby’s heel are collected on a piece of absorbent paper called a “Guthrie card” and tested for phenylketonuria (PKU), cystic fibrosis, sickle cell disease, galactosemia and other serious inherited conditions, some of which can cause death, shortened lifespan or severe, permanent disability if they’re undetected and untreated.

The Guthrie card and the PKU test were developed by Robert Guthrie, MD, PhD. Dr. Guthrie joined the Roswell Park faculty in 1954 as a cancer researcher focusing on childhood leukemia. He and his wife, Margaret, had a young son who was intellectually disabled, so the Guthries were active in the Erie County chapter of an organization that was then called the National Association for Retarded Children (NARC).

Through NARC, in 1957 Dr. Guthrie met Robert Warner, MD, the founding medical director of the Children’s Rehabilitation Center at what is now Oishei Children’s Hospital. Dr. Warner told Dr. Guthrie about the need to develop a faster, more effective way to screen for phenylketonuria (PKU) in the blood of newborns. Undetected, the condition leads to permanent intellectual disability, but with early dietary changes, that disability can be prevented.

Dr. Guthrie accepted the challenge. With techniques and supplies he used in his cancer research at Roswell Park, he set to work with the assistance of Ada Susi, a nurse who was his principal lab technician, and developed a PKU test just three days after his conversation with Dr. Warner.

The following year, Dr. Guthrie joined the faculty of the University of Buffalo School of Medicine, where he continued to perfect the PKU test so that it was even faster and more efficient, requiring just a few drops of whole blood. “It was a very simple idea, like inventing a safety pin,” Dr. Guthrie said later, “but it made possible the testing of every newborn baby before leaving the maternity hospital.”

The PKU test was introduced for broad-based clinical use in 1963, and gradually the Guthrie card was modified to screen for other conditions as well. By the end of the 1960s, newborn screening with the Guthrie card became the standard of care across the U.S. It is now used in countries around the world.

To keep the cost of the test low, Dr. Guthrie chose not to patent it, and he did not accept royalties for his work. The Association of Public Health Laboratories has hailed it as a “breakthrough…that has saved hundreds of thousands of lives.”

During the 1960s, Roswell Park Director George Moore, MD, and his team developed a new medium to support the growth of both healthy and leukemic cells outside the body so they could be studied in the laboratory. Named RPMI 1640, for Roswell Park Memorial Institute, today the medium is an important tool for studying not only cancer but also Parkinson’s Disease, multiple sclerosis, chronic obstructive pulmonary disease (COPD), rheumatoid arthritis and other diseases. It is also used to support tissue transplantation for burn and trauma patients.

Dr. Moore chose not to patent RPMI 1640. It is now manufactured by several companies — including ThermoFisher Scientific on Grand Island, New York — and shipped to research laboratories all over the world.

Contributing to a Breakthrough Treatment for Multiple Sclerosis

In the late 1970s, Roswell Park was the Western Hemisphere’s largest producer of a specific type of interferon, a protein produced by the immune system to fight infection. At the time, researchers hoped that interferon might become an effective cancer treatment. Produced in the laboratory of microbiologist Julius Horoszewicz, PhD, interferon was difficult to extract from tissue, making it “very precious, very scarce,” as Dr. Horoszewicz explained.

In 1977, neurologist Lawrence Jacobs, MD, a faculty member at the University at Buffalo Medical School — which is now named for him — served as a consultant to Roswell Park. When a supply of interferon was left over from a research project, Roswell Park scientists offered it to Dr. Jacobs for his own research.

Because Western New York has a very high incidence of multiple sclerosis (MS) — twice the national rate — Dr. Jacobs conducted clinical studies of the interferon in MS patients. It became the first treatment shown to delay progression of the disease, working so well that today it is FDA-approved for treating certain types of MS. It delays the time to disability and dramatically reduces the occurrence of relapses.

Unlocking the Genetic Code of Down Syndrome

Down syndrome, or Trisomy 21, is associated with not only developmental and intellectual disabilities but also an increased risk for very specific types of childhood leukemia. On the flip side, people with Down syndrome also have a lower risk for several other types of cancer, including breast and colon cancer — which hints that a powerful but yet-undiscovered gene is at work, preventing solid tumors from growing.

Eugene Yu, PhD, Department of Cancer Genetics and Genomics at Roswell Park, focuses much of his research on understanding the link between cancer and Down syndrome. With generous support from The Children’s Guild Foundation, he and his team have developed what researchers call the most complete Down syndrome research model in the world.

This important tool is helping scientists from all over the globe identify the specific genes responsible for the heart defects, learning deficits and leukemia risk seen in Down syndrome — with a goal of developing drugs that can target those genes to reduce the effects of Trisomy 21.