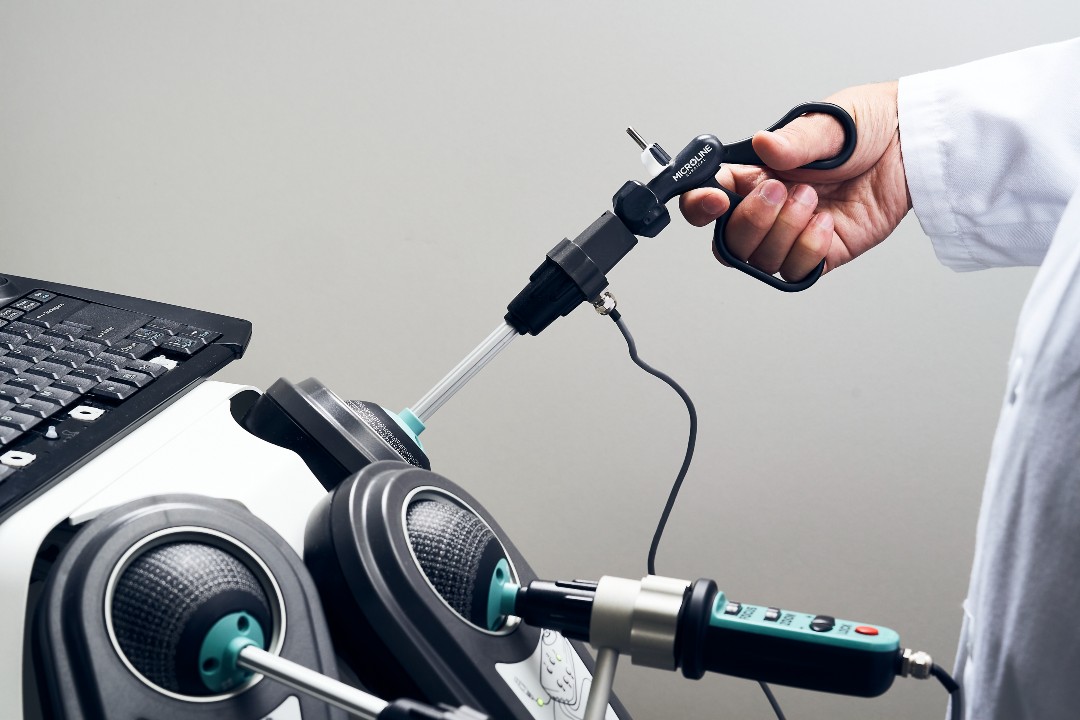 Robot-assisted surgery provides patients the opportunity to have a less-invasive surgical procedure, conducted by a team of highly-trained experts and state-of-the-art technology working together seamlessly.

Many of the techniques used by these surgeons around the world have their roots in the Applied Technology Laboratory for Advanced Surgery (ATLAS), started at Roswell Park Comprehensive Cancer Center by Khurshid Guru, MD, in 2007.

“We are one of the few institutions where technology and the surgical science and patient care are working together at a very high level, on the cutting edge,” Dr. Guru says. “We have one of the unique programs in the world, not just among cancer centers. We have one of the top programs like this. It all started here.”

The inspiration for ATLAS was the ability to train surgical interns and students in the best and safest techniques for operating with robots, including the da Vinci robotic surgical system, a tool Roswell Park adopted before any other medical center in Western New York. Dr. Guru and the team at Roswell Park understood their opportunity: “The million-dollar question at the time was how do we train people in robotic surgery, because it’s different from conventional surgery. We wanted to develop a lab where people could perfect their skills before they touched a patient. The most important thing was patient safety.”

Surgeons undergo a rigorous training program on simulators before they interact with the da Vinci system, and practice even more before they’re allowed to conduct surgery on patients. The layers of skill development, practice and training help to instill confidence in surgeons and provide better results for patients.

But Dr. Guru soon realized there was an opportunity to teach more than the surgeons in his lab. “One of the greatest things about ATLAS, and it’s rare in labs, is that it is a melting pot of engineering, technology, innovation and medicine. They all work together to create new ideas and we can work on ideas to make sure they’re safe.

“We have da Vinci in the lab, we have simulators, we have certification training courses in the Fundamentals of Laparoscopic Skills – we’re one of the only training centers for those skills in the region – and all of these are aimed at making sure the patient is safe.”

Within ATLAS, Dr. Guru and his team also developed new tools and ways of assessing both patients and surgeons.

“Everybody used to assess surgeons based on their hands or their skills in the operating room. We took it to the next level: We’re measuring their cognitive function and their brain activity. Nobody in the world does this,” he says.

They also meet with patients to fully explain the procedure recommended by their cancer teams in order to ensure the patients and their families fully understands what’s about to happen and why. This allows them to be better educated about their care and surgical options in addition to their cancer, so they’re making an informed decision from the start. Within ATLAS is ATLAS Studios, a team of artists and graphic designers who create illustrations depicting surgical procedures to further explain what will happen during a robot-assisted surgery.

Learning from the past

The team also looks backward, to fine-tune and further hone techniques and practices based on outcomes from prior experience. Roswell Park has built one of the largest databases in the world studying the outcome of bladder patients who had robot-assisted surgeries, information that is shared with 50 cancer centers in more than 20 countries.

“We almost define the standards of this procedure across the globe,” Dr. Guru says. “ATLAS is working to make surgery safer for the patient and has become almost a watchdog in a lot of areas to make sure work is done right.”

All of this fits well within Roswell Park’s mission, he adds. “We not only do good for our academic work, we do it in a way that ultimately serves the patient. They are safe, they receive modern care, we bring sophisticated techniques to the patients and then we spread that information globally so people across the world are aware of what we’re doing.”

ATLAS isn’t resting on its innovation-based laurels: the next forefront in development is improving how members of a surgical team communicate to ensure instructions are well stated and well understood, even if the team’s leader and a surgeon cannot see each other.

A study led by Dr. Guru and members of his team found that a combination of spoken words and gestures best helps convey instructions during robot-assisted surgery, leading to fewer mistakes and better outcomes. Their findings were recently published in BMJ Open, a publication of the British Medical Journal.

Sharing communication methods and a common language is crucial for patient safety, he explains. He compares it to a flight crew: The pilots and attendants might have different backgrounds and come from different parts of the world, but they’re able to efficiently and easily provide instructions that result in a safe flight for the passengers.

“It’s safe because the language of communication they use is standardized,” Dr. Guru says. “We don’t have that currently in the surgical field. We have developed algorithms and we’re starting to work into the basics of how to standardize the taxonomy of languages across operating rooms.”

As Roswell Park commemorates the 50th anniversary of the National Cancer Act and its role as a founding member, Dr. Guru knows his lab has a special place in history.

“I think Roswell Park was the right incubation site for ATLAS,” he says. “Roswell has an important role in how new technologies and new evolutions of medicine happen and is very focused on bringing them to patients safely. We also have support from the Roswell Park Alliance Foundation and the donations they bring in that focus on patient safety and education – their support makes it all happen.”

Uromigos podcast launches a series with the pioneers of GU oncology