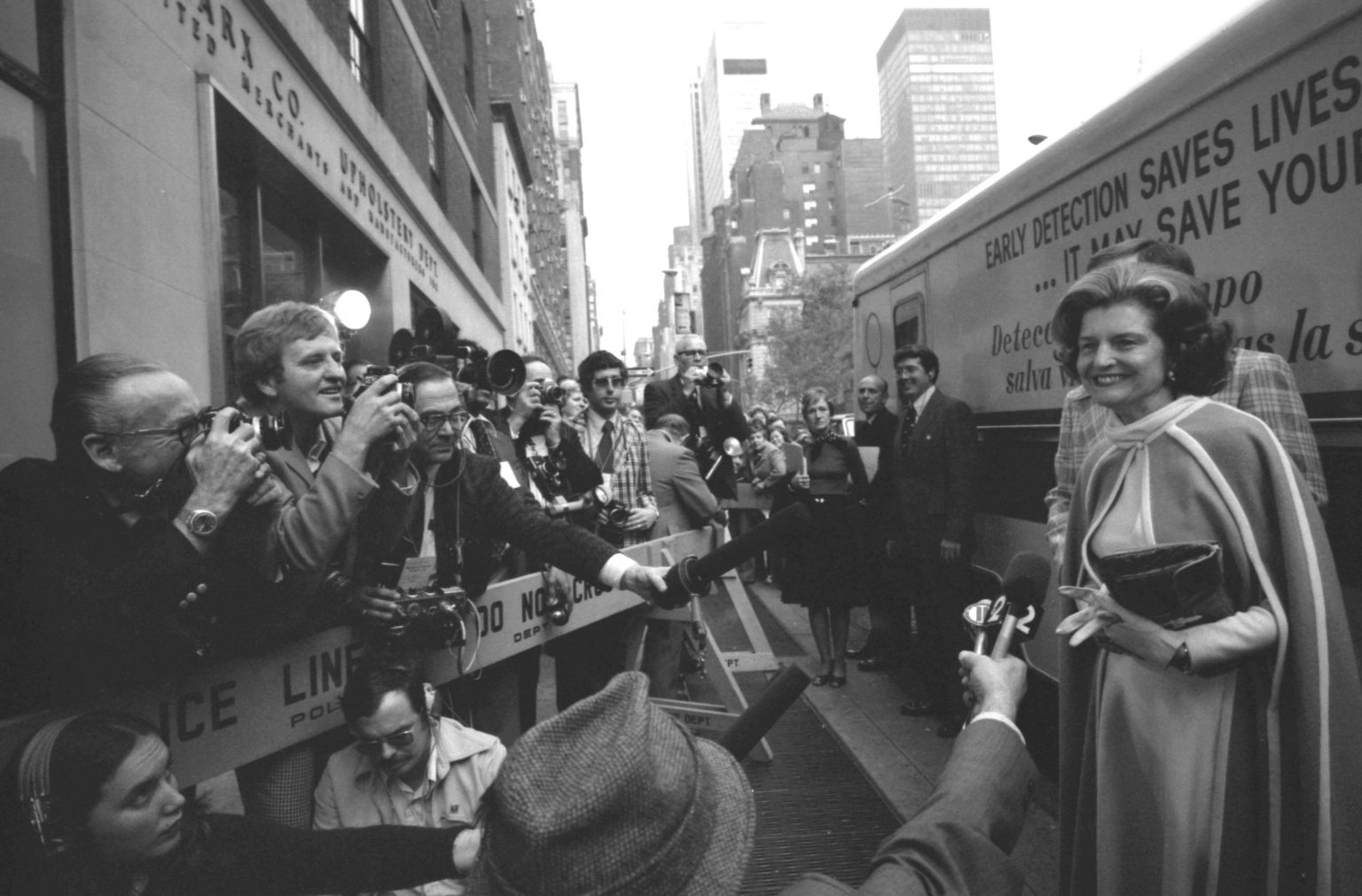 The timing was ironic, with overtones of tragedy for yet another of the Nation’s first families. Nathaniel Berlin, director of NCI’s Div. of Biology & Diagnosis and chairman of the Breast Cancer Task Force, had for months planned a “state of the art” report to the scientific community on detection and treatment of breast cancer. Date for the report–Monday, Sept. 30–was scheduled weeks ago.

Then Betty Ford, the wife of President Gerald Ford, underwent a radical mastectomy two days before the meeting, after a lump in her right breast was found to be malignant. Suddenly Berlin’s report took on an aura of major national significance. Reporters and other non-scientists jostled for seats with the professional observers in the NIH clinical center auditorium, with the overflow watching on closed-circuit TV in a smaller theater.

Berlin told The Cancer Newsletter last spring that he felt it was too early for the Task Force’s tentative findings to receive public recognition, and that the various studies should have another year or more first. But the results were already being widely circulated and NCI decided that an official report was necessary.

Any chance that the report would be limited to the profession with little public awareness disappeared with Betty Ford’s illness. The result may be that the dramatic, although tentative, findings of the Task Force will be forced by public pressure into medical practice-prematurely, some feel.

The latter study admittedly will not be proven out until the patients involved build up survival time. The findings, however, were so convincing that investigators recommended it be terminated for the premenopausal group-in other words, patients who obviously can be helped by the drug should not be denied the treatment.

Bernard Fisher of the Univ. of Pittsburgh, chairman of the National Surgical Adjuvant Breast Project (NSABP), has directed a large clinical study involving surgeons, radiotherapists and pathologist, at 34 institutions attempting to determine the optimal treatment for primary breast cancer. This study, supported by NCI grants and the Breast Cancer Task Force, has involved 1,700 patients.

The results after two years indicate that in each group the various options are essentially equivalent. Thus, for disease limited to the breast, a total mastectomy with or without radiation therapy is equivalent to the radical procedure. For patients with disease in the breast and axillary nodes, total mastectomy with postoperative radiotherapy is equivalent to radical mastectomy. While the long-term follow-up data necessary to obtain survival characteristics are not yet available from this study, similar trends from early stages of other studies have been borne out by long term follow-up and are thus considered predictive.

The major impact of these results, NCI said, is to provide scientific information for practicing surgeons to determine the most effective type of operation for each patient and, in addition, to set the stage for planned clinical studies of less surgery (segmental mastectomy), a procedure where only part of the breast is removed.

To combat this clinical situation a second study, sponsored by the Breast Cancer Task Force and done jointly by the NSABP and members of the Eastern Cooperative Oncology Group and the Central Oncology Group, is investigating the addition of post-operative systemic chemotherapy in women who have modified or radical mastectomy and shown to have positive axillary nodes.

To date 250 patients have been entered on a double-blind randomized study receiving either a placebo or L-PAM for five days by mouth every six weeks for two years.

The study has been underway about 24 months and involves 37 institutions. Data concerning the results of the study to date, presented by Fisher, have been analyzed independently by Carole Redmond of the Univ. of Pittsburgh and Marvin Zelen of the Statistical Laboratory of the Univ. of New York at Buffalo.

The data indicate that the recurrence rate is significantly reduced for women receiving the L-PAM. This was particularly striking for women who were premenopausal where only 1 of 30 patients receiving L-PAM recurred, whereas 11 of 37 recurred after surgery alone. The investigators have recommended that the study be terminated for the premenopausal group of patients because of these dramatic results. For postmenopausal patients the failure rates are also reduced in the L-PAM treated group, but not as markedly. For this reason, that part of the study involving postmenopausal women is under further review.

Paul P. Carbone, NCI acting clinical director and chairman of the Breast Cancer Task Force Treatment Committee, also reported that similar studies employing combination chemotherapy regimens are being done at the National Cancer Institute of Milan, Italy, the Mayo Clinic, UCLA, and the Cleveland Clinic. The study at Milan has accrued 100 patients who are receiving the three-drug combination of cytoxan, methotrexate and 5-fluorouracil. Results are consistent with the L-PAM study.

The importance of these postoperative chemotherapy trials is that patients with breast cancer and axillary node metastasis can receive drug therapy to treat the subclinical metastases before the become clinically obvious and lethal. From two previous clinical studies and from experimental data in animals, this combined approach of surgery and chemotherapy offers the best chance of survival.

The L-PAM treatment is a simple program with minimal side effects and can be widely used. With these encouraging results Fisher and tile NSABP investigators are planning an additional study using a two-drug combination and a combination of L-PAM
with C. Parvum, an immunostimulant. Carbone reported preliminary results from several other studies of patients with metastasic disease indicating that combinations of drugs are more effective than single drugs. In a study sponsored by tile Eastern Cooperative Oncology Group a three-drug combination produced 53% response (shrinkage of tumor by 50% or more) as compared to 19% with L-PAM alone. Patients receiving tile combination regimen had more complete responses and longer survivals than patients
treated with the single agent.

Similar improved results with combination therapy are reported in a study by David Ahmann and his co-workers at the Mayo Clinic. John Horton, tile Albany Medical College of Union Univ., and Thomas Dao, Roswell Park, have reported improved results with the combination chemotherapy of cytoxan, llriorouracil and prednisone as compared to adrenalectomy and adriamycin alone.

Douglass Toriney and co-workers at NCI have demonstrated improved results by incorporating adriamycin into a three-drug combination using cytoxan and fluorouracil.

In several ongoing research studies, immunostimulants such as BCG and C. Parvum are being added to chemotherapy to determine whether treatment results can be improved.

While management of the advanced disease patients has improved, the likelihood of eliminating all cancer cells is highest when the numbers of cancer cells are small. This is most likely to occur when the patient first presents with cancer. An objective of the Breast Cancer Task Force is to develop therapeutic programs utilizing effective local treatment in combination with safe, easily administered systemic anti-cancer drug combinations.

Removal of the ovaries in premenopausal women and the removal of the adrenals or pituitary are forms of breast cancer therapy to which approximately 30% of women respond. Administration of androgens or estrogens can also induce tumor regression. These responses occur in 20 to 40% of patients.

William McGuire, of tile Univ. of Texas at San Antonio and member of tile Breast Cancer Task Force Treatment Committee, described the role of hormone receptors (specific cell proteins) in predicting response to these endocrine treatments for breast cancer. The laboratory determination of whether an individual patient has a hormone receptor can be used to predict whether she will respond to hormone therapy. The importance of this test is that it differentiates between patients who would benefit from hormone therapy and those who would not. These latter patients can then be placed on other therapies without delay.

Approximately 50% of biopsies of breast cancer are found to contain tile receptors. The response rate to endocrine treatments by patients with positive endocrine receptor (ER) tests was markedly higher than that in ER negative patients. For ER positive patients 52% responded compared to 4% responses in patients who were ER negative. Thus the estrogen receptor assays can be helpful to predict the results of endocrine therapy and increase the likelihood of predicting response.

The challenge of the future is to incorporate endocrine therapy into the treatment strategy with chemotherapy for those patients who are ER positive, NCI said. For the ER negative patients two approaches appear possible. These patients can be treated directly with non-hormonal methods obviating the delay of less effective measures. Secondly, there may be ways to uncover or alter the hormone receptors to make them sensitive.

Several studies are being sponsored by the Breast Cancer Task Force to combine hormonal approaches with chemotherapy. Two studies, one at tile Mayo Clinic and the other through the Eastern Cooperative Oncology Group, are studying ways to combine combination chemotherapy with oophorectomy in premenopausal women. Another approach being done at Emory Univ. by Charles Vogel combines estrogens with a three drug combination of cytoxan, fluorouracil and adriamycin.

Tormey, chief of the NCI Medical Breast Cancer Service, reported on studies of biologic markers–substances found in the blood or urine that correlate with the presence of tumor. Ideally, levels of these substances should correlate with the amount of tumor in the patient and change in parallel with the response of tumors to therapy.

Out of eight biologic markers tested, three, human chorionic gonadotrophin (HCG), carcinoembryonic antigen (CEA), and a transfer RNA nucleoside (N2-N2-diemthylguanosine), were found to be present in abnormal amounts. Using these markers, 63 patients (97%) in a group of 65 were found to have abnormal levels of at least one of these markers. In a group of 15 post-operative patients found to have positive nodes, 10 (67%) had elevated levels.

The report went into advances being made in early detection.

Early detection of breast cancer before it has spread to other parts of the body increases a patient’s chance for long-term survival and cure, the report said. Patients whose axillary lymph nodes are free of cancer (negative nodes) at the time of breast cancer diagnosis have a 5-year survival rate of about 75%, and about 65% of these patients are alive after 10 years. In contrast, women with breast cancer in the axillary nodes (positive nodes) have a 5-year survival rate of about 50%, and only about 25% will live 10 years.

In the U.S. at present, patients have negative, cancer-free nodes in about 45% of newly diagnosed breast cancer cases. A real hope that this rate may be improved-with a corresponding increase in survival rates–comes from the breast cancer screening demonstration program sponsored jointly by the American Cancer Society and NCI. William Pomerance, chairman of the Breast Cancer Task Force’s Diagnosis Committee, reported that about 75% of the women with breast cancer detected so far by the screening program had negative nodes.

The ACS-NCI program involves 27 breast cancer screening projects, where up to 270,000 women of ages 35 years and older will be screened annually with a physical examination, X-rays (film mammography or xeroradiography), and thermography. The first projects established began screening women in mid-1973; all 27 centers will be operating by the end of 1974. About 75,000 women have been screened to date. When comprehensive data have been compiled, it is expected that about 775 breast cancers will have been detected among these women, a rate of 10.5 cases per 1,000 women screened, or about 1,000 cases per 100,000 women screened.

The combination of physical examination and X-ray mammography in breast cancer screening has been shown to decrease breast cancer death rates. A group of 31,000 women screened for breast cancer by the Health Insurance Plan of Greater New York in a NCI-supported study have had a one-third reduction in breast cancer deaths over a 5-year follow-up period as compared with 31,000 women given their usual comprehensive medical care in their medical groups. One-third (44 out of 132) of the breast cancers detected in the screening program were found by X-ray mammography before the tumors were large enough to be detected physically. Only one of these 44 women died of breast cancer during the 5-year period, indicating that early detection led to substantially more effective treatment.

The report concluded that:

Patient’s Husband Had Idea to Use Avastin For Glioblastoma

Changes In Cooperative Groups As Result Of Move To DCT Topic Of Chairmen’s Meeting Sept. 16