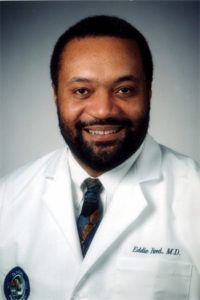 Eddie Reed, a physician who conducted ground-breaking clinical studies on paclitaxel, one of the major cancer drugs of our time, died May 28.

Many of us will remember Eddie for his achievements. They were many and spectacular. In the late 1980s, I was the other and younger Black doctor in the Medicine Branch at NCI. I will remember him as a cancer doc, an intense man with high standards.

Over the years, I got to understand and even love this complex man. 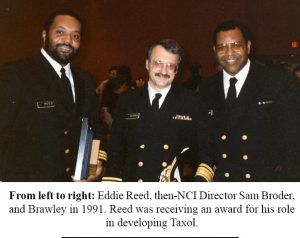 Eddie was born near West Memphis, Ark. He was one of sixteen children. His parents were sharecroppers. Eddie experienced segregation and discrimination in ways many Americans have forgotten existed. I will always remember him telling me about his brother who had an asthma attack and died after an Arkansas hospital refused to treat him because they did not treat “Negroes.”

This is perhaps the best example of the environment Eddie and his siblings grew up in. They were all driven. Eddie was not the only of his brothers and sisters to go to college. Several received graduate degrees. Like Eddie, they have served in high positions in government and academia and done tremendous service for this country.

Eddie would go to Philander Smith College, a small historically Black college in Little Rock. He would go on to the Yale Medical School, complete internal medicine residency at Stanford and a fellowship in medical oncology at NCI. He stayed on at the NCI as a senior investigator.

His contributions at NCI were massive:

Eddie’s work would make him among the first Blacks to earn tenure as a senior investigator at the NIH. He would also become the first Black branch chief in the NCI intramural program.

After a twenty-year career at NIH, Eddie became director of the Mary Babb Randolph Cancer Center at West Virginia University, director of the Division of Cancer Prevention and Control at the Centers for Disease Control and Prevention, an endowed professor at the University of South Alabama.

Two years ago, he was lured back to NIH to be clinical director of the National Institute for Minority Health and Health Disparities. Eddie came back to the hospital where he trained and developed paclitaxel. His homecoming would be far too short. Ironically, it was at the NIH clinical center where this cancer doc would get ill and be treated.

More than 25 years ago, while on the same NCI clinical service that he died on, Eddie gave some wise advice to an academic physician scientist who was a few years his junior. They are as pertinent to young physicians and scientists today.

Eddie Reed had high standards and did not tolerate lack of discipline. He was strict and at times hard to work for. The key to understanding Eddie was that he was focused, on big things that he helped make hot. He always worked to deserve the honor.

He is survived by his wife, Dr. Meenakshi Reed, and brothers and sisters.

“Dog And Pony Show” At FCRF For NCAB OFF