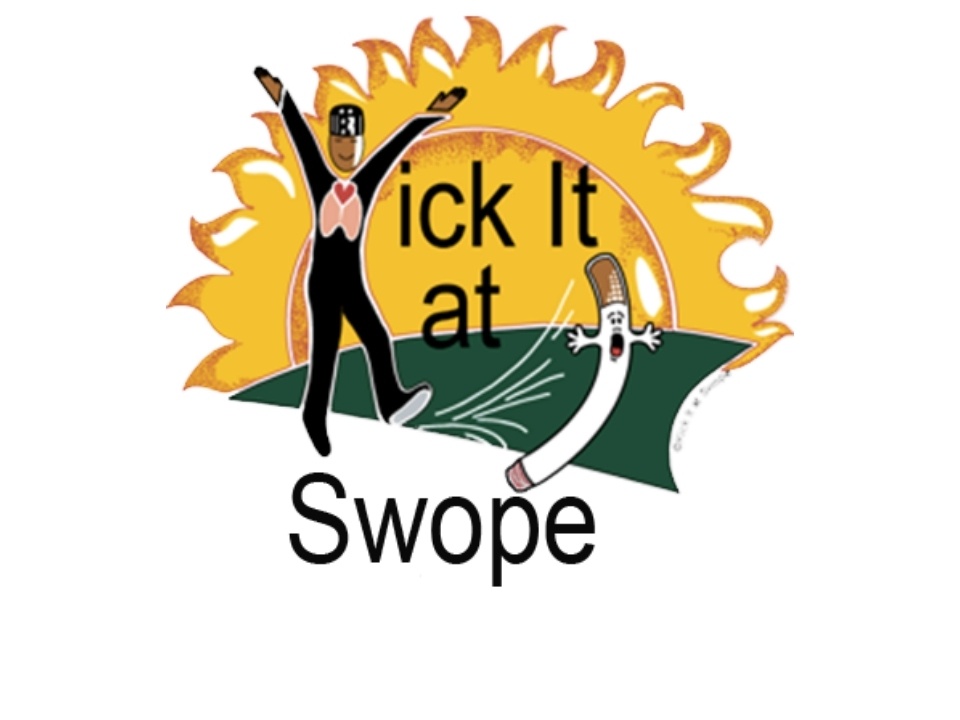 Quitting tobacco is far from a “one size fits all” endeavor. Few researchers have explored how nicotine addiction may uniquely affect African Americans. Consequently, not enough cessation resources are developed with African Americans in mind.

Scientists Nikki Nollen, PhD, and Lisa Sanderson Cox, PhD, professors in the Department of Population Health at the University of Kansas Medical Center, helped forge these vital relationships. To date, more than 3,500 participants from Swope have received counseling for improving health behaviors such as cigarette smoking. Some have also received free FDA-approved smoking cessation products.

“Hundreds of tobacco cessation drug studies and trials have studied White tobacco users. As a result, we know how to help White smokers,” Dr. Cox said. “But few studies have examined pharmacotherapies in communities of color, including African Americans, an underserved community that has a particularly strong disease burden related to tobacco use. We work with African Americans to reduce tobacco mortality in our catchment area. It is a core part of our program’s mission.”

Dr. Nollen, who serves as co-leader of the cancer center’s Cancer Prevention and Control research program, along with Dr. Cox, leads one of the only programs in the country exclusively focused on improving tobacco dependence treatment outcomes for African American smokers. Their work has been continuously funded by the National Institutes of Health (NIH) and Patient-Centered Outcomes Research Institute (PCORI) since 2006. Dr. Nollen and Dr. Cox’s efforts include evaluating promising behavioral and pharmacotherapy treatments for nicotine addiction. They also examine the psychosocial and biological mechanisms underlying tobacco use and treatment outcomes.

Half of African American participants were less likely to abstain from tobacco use compared to White smokers at week 26, despite both groups adhering to the treatment regimen. This was not due to biological, demographic or treatment-related factors. Instead, it was socioeconomic issues, such as homeownership, income and neighborhood problems, as well as smoking and treatment process factors.

“Too often in our field, we conclude that race is the cause of health inequities, rather than acknowledging that race is a proxy for powerful social forces that shape our experiences in the world,” Dr. Nollen said. “Our study was one of the first to examine why African Americans who smoke have a harder time quitting than Whites who smoke.”

According to Dr. Nollen, to improve treatments, we must consider how socioeconomic disadvantage constrains quitting within the context of the intervention.

This five-year study highlighted the difficulties faced by African Americans in quitting and led to a novel adaptive therapy trial examining if changing pharmacotherapy when it is not working leads to better outcomes compared to continuing the same pharmacotherapy throughout treatment. The findings from the head-to-head trial were published in the Journal of the National Cancer Institute (JNCI).

A growing number of tobacco users smoke just a few days a week. Historically, smoking cessation treatment studies have focused on moderate to heavy smokers. African Americans and Latinxs are more likely to be light, non-daily smokers compared to Whites. According to Dr. Cox, developing treatments for those who smoke only occasionally is important to meet the needs of the African American community.

“We are one of the only research teams in the country conducting this type of research. Non-daily and light smokers have been overlooked for decades,” Dr. Cox said. “The cancer risk for non-daily smokers is four times higher than non-smokers. There is no safe level of smoking, so we can’t overlook treatment for those groups.”

“What’s the ideal treatment scenario for someone who smokes just 18 days a month? Do they use the patch every single day – even though they may not smoke? We were concerned that non-daily smokers may be overtreated with nicotine,” Dr. Nollen said.

To better understand this, Drs. Nollen and Cox completed the second randomized control trial in the U.S. examining treatment for non-daily smokers and the only such trial focused exclusively on African Americans. Participants were recruited from Swope Health Center.

The team found that African American non-daily smokers who received their choice of nicotine gum, patch or lozenge refrained from tobacco use more often than those who received counseling alone. Importantly, the group receiving nicotine replacement therapy experienced side effects at the same rate as those in the counseling alone group. This quelled the teams’ concern that daily nicotine replacements dosed as high as 21 milligrams per day are unsafe for non-daily smokers. The findings were published in Addiction.

Scientists and clinicians are still grappling with the potential implications of e-cigarette use, and whether it is a safer alternative to traditional cigarettes. Working with Swope, members of KU Cancer Center spearheaded a study to track changes in health outcomes among African American and Latinx adult smokers who switch from cigarettes to electronic cigarettes (e-cigarettes). Dr. Nollen served as site principal investigator.

“Fourth-generation e-cigarettes contain concentrations of nicotine that are equivalent to a tobacco cigarette and other appealing features that may support switching and reduce potential health risks among those who smoke combustible cigarettes,” Dr. Nollen said. “We wanted to examine the biomarkers of exposure in both groups and determine the risk-benefit tradeoff of e-cigarettes.”

Those who switched to e-cigarettes experienced a significant reduction in a biomarker called NNAL, which has been studied as a carcinogen biomarker of tobacco use. When NNK, a tobacco-specific lung carcinogen is metabolized, it converts to NNAL, indicating the body’s exposure to tobacco products. E-cigarette users also experienced a dramatic drop in carbon monoxide and self-reported respiratory symptoms. Nicotine exposure, lung function and blood pressure remained unchanged.

“What was most surprising was the magnitude of change experienced by those in the e-cigarette group,” Dr. Nollen said. “After six weeks of use, they reduced their NNAL by 64%, carbon monoxide by 47% and respiratory symptoms by 37% compared to those in the control group who continued to smoke cigarettes as usual.”

The team was also surprised to witness that a complete switch to e-cigarettes was not needed to achieve benefits. Those in the e-cigarette group who only partially switched – i.e., became dual users of both cigarettes and e-cigarettes – also experienced reductions in NNAL, carbon monoxide and respiratory symptoms, though to a lesser degree than those who made a complete switch. Dr. Nollen noted that these are short-term outcomes, and the long-term health effects of e-cigarettes remain unknown.

The findings of the clinical study – the first such trial to examine fourth-generation salt-based nicotine e-cigarettes – were published in JAMA Network Open.

African American adults are much more likely to use menthol-flavored cigarettes compared to other groups. According to the Centers for Disease Control, a higher percentage of Black adults who smoke started by using menthol cigarettes (93%) than White adults who smoke (44%).

Dr. Nollen’s and Dr. Cox’s pioneering work has informed clinical practice for treating African American light and non-daily smokers. Their findings on the clear attenuating effect of menthol on cessation in African American smokers guided the FDA’s 2021 decision to move forward with a plan to prohibit menthol cigarettes and all flavored cigars. The agency’s regulatory action stopped short of including menthol-flavored e-cigarettes. According to Dr. Nollen, research is needed to determine whether this approach is more harmful or helpful in the long run.

“A ban on menthol-flavored e-cigarettes may prevent more people under 18 from using tobacco. But it may also discourage adult menthol smokers to switch from tobacco cigarettes to e-cigarettes,” Dr. Nollen said.

This could impact public health, with intensified negative effects in minority communities already disproportionately burdened by tobacco. The FDA has identified the impact of flavored e-cigarettes on smoking patterns as a research priority. Drs. Nollen and Cox are committed to pinpointing possible unintended consequences of regulatory actions on tobacco-related health disparities.

“The findings are consistent with observational studies that have found that nicotine – not flavor – drive use in adult e-cigarette users and provide strong preliminary evidence to support restrictions on menthol-flavored e-cigarettes given potential benefit to youth and lack of evidence of harm to adult smokers,” Dr. Nollen said.

A prospectively designed randomized clinical trial will answer this question, Dr. Nollen added. The proposed study will provide critical data to the FDA to support restrictions on menthol e-cigarettes that could reduce the number of young tobacco users, with no negative impact on adult smokers transitioning to e-cigarettes.

Working together, The University of Kansas Cancer Center and Swope Health Center team has helped bridge the gap in tobacco cessation treatment. Specifically, the team has:

African Americans are interested in participating in clinical trials research, the team also learned. Drs. Nollen and Cox attribute this to the decades of trust they’ve built with the community via the Swope Health Center.

But there is more to do. Each year, about 45,000 African Americans die from tobacco-related diseases.

“Because African Americans are so disproportionately burdened by tobacco use, we will continue to tackle multiple approaches to advancing treatment with this community,” Dr. Cox said.

“Because African Americans are so disproportionately burdened by tobacco use, we will continue to tackle multiple approaches to advancing treatment with this community.” – Dr. Lisa Sanderson Cox

Black History Month panel: “We need to talk about justice”

A Pioneer of Prevention Paul Engstrom