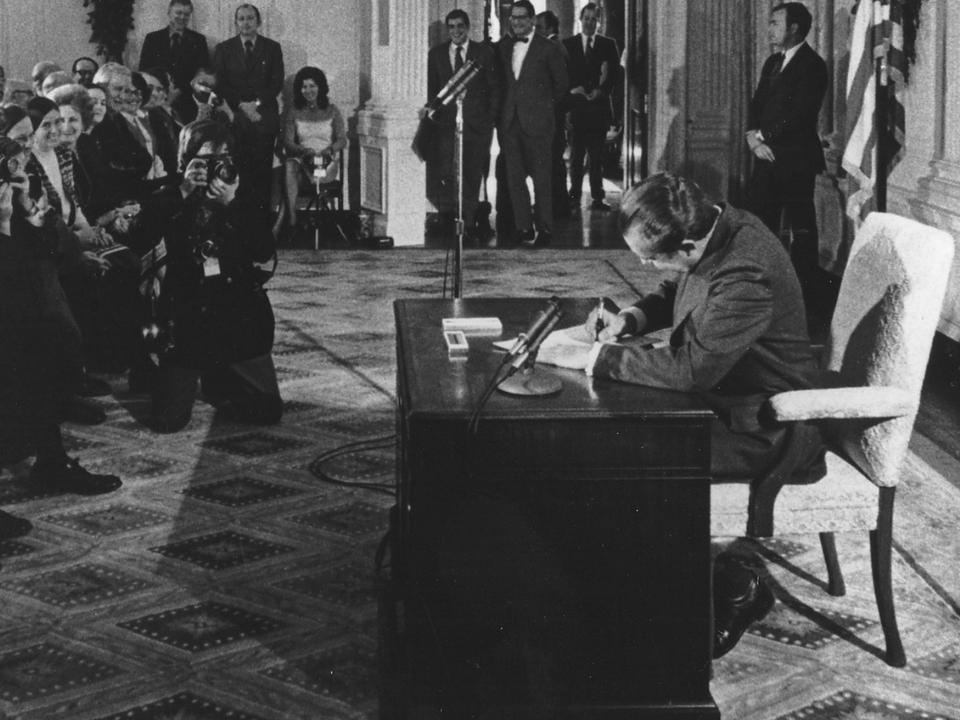 Fifty years ago, President Nixon interrupted Christmas festivities to sign the National Cancer Act of 1971 into law. Fifty years later, we invite you to immerse yourself in that day to reflect on how far we’ve come.

Speaking surrounded by holly and Christmas cheer in the State Dining Room, Nixon declared, “I hope that in the years ahead that we look back on this day and this action shown as being the most significant action taken during this administration.”

Patricia Nixon, whose dedication to Christmas established a number of White House traditions still in place today, described her 1971 White House Christmas decor as “a land of enchantment.”

“Holly, garlands of evergreens and banks of red poinsettias fill the famous rooms,” reported The New York Times. “Mrs. Nixon pointed out there is mistletoe, too.”

Under the mistletoe, the White House press office readied itself for the signing of landmark legislation. Nixon’s statement to the press is imbued with Christmas spirit:

“Hope and comfort, the relief of suffering and the affirmation of life itself—these are qualities which have traditionally been associated with the Christmas season. There could be no more appropriate time than this to sign into law the National Cancer Act of 1971.”

Speaking on behalf of the American Cancer Society, then-President Alva  Letton said, “We would like to think that this is a wonderful Christmas present in the signing of this bill today for the 52 million people in our country who will develop cancer who are now living.”

An in depth analysis of the lead-up to the signing is available in Cancer Crusade: The Story of the National Cancer Act of 1971, the authoritative book by Richard A. Rettig, made available by the Cancer History Project.

We invite you to read Nixon’s statements in full below and view the archival footage of the day.

Statement by the President

PRESIDENT NIXON: Hope and comfort, the relief of suffering and the affirmation of life itself—these are qualities which have traditionally been associated with the Christmas season. There could be no more appropriate time than this to sign into law the National Cancer Act of 1971. For this legislation—perhaps more than any legislation I have signed as President of the United States—can mean new hope and comfort in the years ahead for millions of people in this country and around the world.

The enactment of this legislation culminates a year-long effort to launch an unprecedented attack against cancer. I called for such a program in my State of the Union message in January 1971, and I expanded on that call in my special message to the Congress concerning health on February 18th. Early in May, I submitted to the Congress very specific proposals for a cancer-cure program—proposals which are reflected in all important respects in the legislation I have signed today.

The effort to mobilize a concerted national campaign against cancer has continued to make significant progress since those proposals were submitted. One of the most important steps was the approval by the Congress of the additional $100 million I requested to support an expanded attack on cancer. This additional $100 million, when added to the regular appropriation for this fiscal year, gives the National Cancer Program a current operating level of $337.5 million, compared to only $180 million during the first hall of fiscal year 1972. Another important component in our campaign was put in place in October when I announced that the bacteriological warfare research facilities at Fort Detrick, Maryland would be converted into a leading center for cancer research.

Now this year of preparation for an all-out assault on cancer comes to a climax with the signing of the National Cancer Act. The new organizational structure which this legislation establishes will enable us to mobilize far more effectively both our human and our financial resources in the fight against this dread disease.

Having asked for this authority—and this responsibility—I now pledge to exercise it to the fullest. Biomedical research is, of course, a notoriously uncertain enterprise and its rate of progress cannot be predicted with confidence. But I can say with the greatest confidence that there will be no uncertainty about the Government’s role in this effort. I am determined that the Federal will and Federal resources will be committed as effectively as possible to the campaign against cancer and that nothing will be allowed to compromise that commitment.

I make this statement with even greater confidence knowing that Benno C. Schmidt has accepted my invitation to become the first chairman of the President’s Cancer Panel. As Chairman of the National Panel of Consultants on the Conquest of Cancer, Mr. Schmidt has played an active role in the development and enactment of the National Cancer Act. He is an effective leader of men and a dedicated community servant. The Nation is fortunate that he will be heading this important panel in its critical first year.

Even as the plans for our National Cancer Program were being completed in the past few months, other developments have continued to fuel our hopes for further substantial progress in discovering the causes and cures of cancer. Scientists in all parts of the world have continued to contribute important new findings to the growing pool of knowledge about this disease. There continues to be every reason for believing that cancer research, of all of our research endeavors, may be in the best position to benefit from a new application of human and financial resources.

This is the case, however, only because so many men and women have already given so much to the battle against cancer in the past. Their energies and talents and sacrifices have built the foundations on which all future progress must rest.

As we plan for future progress, we should also remember that the expansion of the Federal campaign against cancer in no way diminishes the continuing importance of private and voluntary activities. It is essential, for example, that an organization such as the American Cancer Society—which has raised so much money for this cause and which has done so much to promote research and education in this field—continue to play its full effective role. The new National Cancer Program must not replace our present efforts to fight cancer; it must supplement them and build on them.

As this year comes to an end, cancer remains one of mankind’s deadliest and most elusive enemies. Each year it takes more lives in this country alone than we lost in battle in all of World War II. Its long shadow of fear darkens every corner of the earth. But just as cancer represents a grim threat to men and women and children in all parts of the world, so the launching of our great crusade against cancer should be a cause for new hope among people everywhere.

With the enactment of the National Cancer Act, the major components for our campaign against cancer are in place and ready to move forward. I am particularly happy that the year 1971—at the beginning of which I issued my call for a new campaign against cancer—can end with the signing of this landmark legislation.

We are here today for the purpose of signing the Cancer Act of 1971. I hope that in the years ahead that we look back on this day and this action shown as being the most significant action taken during this Administration. It could be, because when we consider what cancer does each year in the United States, we find that more people each year die of cancer in the United States than all the Americans who lost their lives in World War II.

This shows us what is at stake. I sent a message to the Congress the first provided for a national commitment for the conquest of cancer, to attempt to find a cure.

Now, with the cooperation of the Congress, with the cooperation of many of the people in this room, we have set up a procedure for the purpose of making a total national commitment. I am not going to go into the details of that procedure, except to say this: As a result of what has been done, as a result of the action which will come into being, as a result of signing this bill, the Congress is totally committed to provide the funds that are necessary, whatever is necessary, for the conquest of cancer. The President is totally committed—we have a Presidential panel headed by Benno Schmidt, which will report directly to the President so that the President’s influence, whenever necessary, can be used to reach this great goal.

And, in addition to that, all of the agencies of government, the National Institutes of Health, HEW, et cetera, are totally committed.

Now, having said that, I have spoken exclusively of government up to this point. In this room are scores of people who have worked voluntarily for this cause for many, many years. The American Cancer Society, of course, is the best known organization, but there are many, many others as well.

So, we need the continued cooperation of all the volunteer organizations. You will have, of course, the total commitment of government and that is what the signing of this bill now does.

Finally I should emphasize, as Benno Schmidt mentioned just a moment ago, that we would not want to raise false hopes by simply the signing of an Act, but we can say this: That for those who have cancer, and who are looking for success in this field, they at least can have the assurance that everything that can be done by government, everything that can be done by voluntary agencies in this great, powerful, rich country, now will be done and that will give some hope and we hope those hopes will not be disappointed.

(At this point, President Nixon signed the Cancer Act.)

Now, ladies and gentlemen, for those of you who have not participated in signing ceremonies and that, of course, does not include the Members of the House and Senate who are here, I see that many of them have been here previously, the custom is always to sign with the Presidential pen. I will use two pens for the signature, but a souvenir pen will be available to everybody in the audience here. We had to stretch a little to find that many, but we did it.

Incidentally, it is a very good pen, but the box is worth more than the pen.

Benno, you get the “Richard”. Dr. Letton, if you will step forward. The President of the American Cancer Society. You get the last name.

We would like to think that this is a wonderful Christmas present in the signing of this bill today for the 52 million people in our country who will develop cancer who are now living.

This bill, we feel, is a real great opportunity for America, probably the greatest thing that has ever been done by the United States. To you, sir, who asked for this to be a national priority and to our friends in the Congress who gave us this bill, two and a half, two and a quarter million of the volunteers of the American Cancer Society asked that I express their appreciation. We are truly grateful, sir.

THE PRESIDENT: Thank you, Doctor.

Bill McGivney: How NCCN guidelines came to play a role in payment for cancer therapy