Fast forward 13 years to June of 2021. Rutgers Cancer Institute of New Jersey, the state’s only National Cancer Institute-designated Comprehensive Cancer Center, along with RWJBarnabas health in partnership with the New Brunswick Development Corporation (DEVCO), broke ground on the state’s first freestanding cancer hospital, which will be named the Jack and Sheryl Morris Cancer Center. What started as a one-story storefront on George Street in New Brunswick to a 225,000 square foot building on Little Albany Street will now transform into a 12-story 510,000-square-foot structure, which is expected to be completed in 2024.

The 15 year anniversary celebration was featured in an article in the fall 2008 edition of The Cancer Institute of New Jersey’s Oncolyte newsletter. See below for the original article and corresponding photos.

From a one-story storefront on George Street in New Brunswick to a 225,000 square foot building on Little Albany street, the Cancer Institute of New Jersey has made great strides in a relatively short time to build itself into a world class facility, which provides the most comprehensive treatment and patient care and conducts state-of-the-art research. While the story of CINJ began prior to 1993, it was that year that the first patients came through the doors.

CINJ celebrated this 15-year anniversary during its National Cancer Survivors Day event in June, welcoming a number of “original” patients, doctors and other members of the care team for a heartwarming reunion. The milestone itself attracted attention to one of CINJ’s longest serving teams, the Hematologic Malignancies Tumor Study Group led by Roger Strair, MD, PhD, who is also a professor of medicine, UMDNJ-Robert Wood Johnson Medical School. With the help of Jacqueline Manago, RN, BSN, OCN, CINJ’s bone marrow transplant coordinator, who has worked with Dr. Strair since the beginning, the “heme team” has treated a total of 4,225 patients since 1993, constituting more than 33,000 patient visits.

It is the entire CINJ team that makes CINJ what it is today: a leader in research, treatment, prevention and education. It is by upholding those pillars that CINJ was able to achieve Comprehensive Cancer Center designation by the National Cancer Institute, an honor held by only 40 other cancer centers in the country. It is the dedication of those individuals, along with patients, their families and philanthropic supporters that helps CINJ remain on the cutting-edge of patient care and research. While our team members look forward to further growing our programs, some of them take a look back… recalling some of the early days and other milestones at CINJ.

“I think the best recollection I have was the feeling that we were all part of something important and very exciting! I learned to do a lot of different jobs as we brought new faculty on board. The main objective was to get each doctor up and running so he/she could see patients. I remember the day Dr. DiPaola started at CINJ. He was so excited to get his lab coat. He and Dr. August shared an office for a brief time. I remember the day there were 100 patients seen in the clinic. It was amazing!! All the secretaries took a field trip to see our new building. We didn’t know how we could ever find our way around.”

Linda Baker remembers the very early days in CINJ history when operations first started in a building on George Street in New Brunswick. She recalls not only waiting for the first patients to trickle in, but office furniture as well. Barker notes there was always a dedicated team, willing to endure quite a bit in order to build CINJ into what it is today.

Regina Cunningham is amazed at how CINJ has grown in such a short amount of time. She recalls that in the beginning, there was such a small amount of space, that the clinic and treatment areas were housed in the same location all on one floor. She remembers the sense of “team” that quickly developed as both groups sat together each week as one big unit to review patient charts. 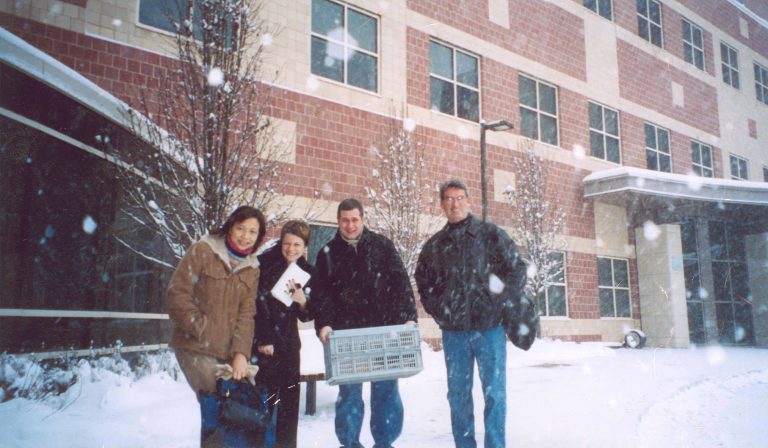 Past Presidents of the American Society of Clinical Oncology

Sarah Cannon: The Name & The Story