Lee Moffitt says he can’t go anywhere without someone asking if he’s THAT Lee Moffitt. Stories tumble out about the loved one, friend or neighbor who needed Moffitt Cancer Center—some still struggling, others cured, all cared for with compassion.

“It’s overwhelming. It’s very emotional,” says the center’s founder and namesake. “It gives me credit that I don’t deserve. It’s the caregivers at this institution that deserve the praise.” The doctors, nurses, researchers, each and every person who works to keep the lights on and doors open at Moffitt Cancer Center.

But 30 years ago, when the first patients came for care on Oct. 27, 1986, the sign above those doors read H. Lee Moffitt Cancer Center for a very good reason.

Florida State Representative Lee Moffitt had a lot on his plate, representing the people of Tampa and beyond in District 66. But his thoughts often turned to three friends: Joseph Lumia, a prominent accountant and Moffitt’s campaign treasurer; George Edgecomb, an attorney, a fellow Big Brother, and the first African-American judge in Hillsborough County; and Moffitt’s legislative aide, Judy Barnett. All three were battling cancer. All three were forced to look out of state for the specialized care they needed.

“Over the course of that year, all three of them died — all in their early 30s,” Moffitt recalls sadly. “It hit me very hard. I decided that one of the things I wanted to accomplish in the Legislature was to see if we could create a cancer center in Florida that would be as good as any cancer center in the United States so that Floridians would not have to go outside the state. I felt that it would be a noble quest to create what I hoped would ultimately become an NCI [National Cancer Institute] Comprehensive Cancer Center in Florida,” says Moffitt.

“You have to look at Florida back in the ’70s,” he adds. “Florida was one of the fastest growing states in the nation. It also had very high incidence of cancer. We had a void that we needed to fill in this state.”

But to Moffitt’s surprise, his idea to fill that void was not widely embraced. “It was pretty lonely back then,” he says. “When word got out that I was planning to advocate for the creation of a cancer center, I thought that people would join me. Quite to the contrary, I found almost 99 percent opposition. But back then, I was more of a junior member of the Legislature. I didn’t have a lot of clout.”

Moffitt hung onto his vision while his influence in the Legislature grew. As the incoming Speaker of the Florida House of Representatives, he was able to push through the necessary legislation to establish a cancer center in Tampa. His courage inspired fellow lawmakers to fund the cancer center in a most appropriate way — by diverting a small percentage of state cigarette tax revenue. In 1981, Moffitt’s dream became the first free-standing cancer treatment and research center authorized by the state and the only such institution in the nation directly financed by a tax on tobacco.

That victory was followed by even more planning and more years of hard work. In January 1983, Moffitt celebrated the groundbreaking for the $70 million, 162-bed facility. Construction continued throughout 1985, with finishing touches completed in early 1986. Following a formal dedication ceremony on Oct. 18, 1986, Moffitt Cancer Center admitted its first patient on Oct. 27, 1986 — 30 years ago.

It was an emotional milestone Moffitt finds hard to put into words.

“I felt like I had fulfilled a promise that I had made to those friends that lost the battle.”

Moffitt says he never doubted that the cancer center would be created — nor that it would succeed. “I always thought, if I could get the resources, we had the potential to make this cancer center one of the great institutions in the world,” he says. “And fortunately over the history of the cancer center, we were able to get the resources to grow and prosper and to hire the extremely talented people that have made us the success that we are today.”

With such an outlook, he was pleased, but certainly not surprised, to see Moffitt Cancer Center named the nation’s No. 6 cancer hospital in 2016 by U.S. News & World Report, which has listed Moffitt as one of the “Best Hospitals” for cancer care since 1999.

Coincidentally 2016 also marks the NCI’s renewal of Moffitt’s Cancer Center Support Grant and its Comprehensive Cancer Center status. “That is a big deal in the cancer world, and I’m proud of those who worked hard on reaccreditation. It’s a testament to the wonderful team that we have here at the cancer center and the fabulous researchers that have worked so hard to get us to the point where we are now,” he says.

“I think the key to success — not just here, but in life — is to make sure that you surround yourself with talented people who are willing to buy into the same vision that you have. One of the reasons that the cancer center has been so successful is because we’ve had, and I’ve had, the privilege of working with friends and allies that contributed to its success over the years in so many ways. Without their help, we would not be where we are today.”

It would be impossible to list all those friends and allies. But Moffitt notes that the cancer center has been blessed with committed board members and leadership that few other institutions in Florida can match, including former governors, U.S. senators, and leaders with community, corporate and professional sports ties. Over the decades, they have volunteered countless hours for board and committee meetings, fundraisers, trips to meet lawmakers in Tallahassee, speaking engagements, recruiting dinners – in short, a tremendous amount of work “in the trenches,” as Moffitt puts it. Add to this the compassionate and skilled care of the center’s entire clinical team, the brilliant scientists in its research enterprise and the many other team members who support its mission, and Moffitt says it’s plain to see how this cancer center has spread its impact well beyond the immediate Tampa Bay area.

“Our mere presence alone in the state of Florida has elevated, in my opinion, the level of cancer care all over the state,” says Moffitt. “Not only have discoveries that we’ve made trickled down to help doctors in many communities better care for their patients, many of our doctors and the students who’ve trained here have now dispersed throughout the state and the country.

You can attribute the training that they received here as another one of the reasons why we’ve had such a positive impact on the fight against cancer.”

As for tomorrow and the center’s next 30 years, Moffitt foresees an even greater impact on how cancer is treated, not only in Florida but also around the world. He acknowledges it will take renewed courage to face the growing pains ahead, with the need for more patient care and research space. “The challenge is always getting the resources that you need to build. We need bricks and mortar. We need to be able to hire the talented people necessary to round out our team. All of these needs cost money. We’re constantly going to the Legislature and into the community and asking for financial support.

“The Legislature and the community and our friends have been very generous over the years, but I think that they would not be as generous if it had not been for the wonderful reputation and the success that this center has shown over the years.

“It’s too easy to be mediocre. It’s not easy to be exceptional. I think that drives every employee at this center. We have come so far, but we have a long way to go — and we will.” It would be impossible for H. Lee Moffitt to think otherwise.

He never wanted this cancer center to bear his name

As House Speaker, Moffitt ruled his fellow lawmakers out of order when they first attempted to formalize that honor in an amendment back in 1984. It would take some quiet maneuvering to get Moffitt to surrender the gavel in the closing days of his final legislative session and head to the governor’s office, so that House members could unanimously pass the measure, walk it over to the Senate for equal affirmation and down to the governor’s desk for signature the next day.

“I didn’t realize it was a ruse,” Moffitt recalls with a chuckle. “They named the cancer center after me, those sneaky rascals.”

Along with his name, Moffitt Cancer Center bears one more inscription on its walls — its mission: to contribute to the prevention and cure of cancer.

Ask any Moffitt team member today, and you’ll find equal commitment to both those inscriptions. 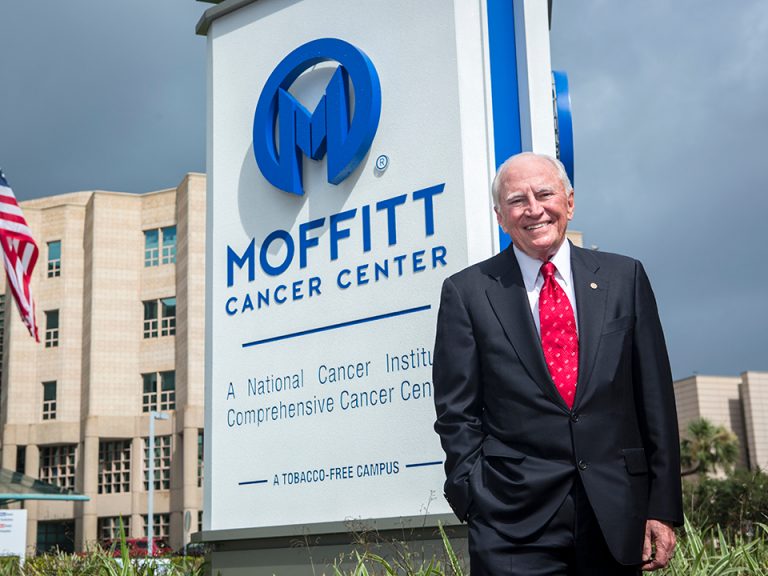 “When word got out that I was planning to advocate for the creation of a cancer center, I thought that people would join me. Quite to the contrary, I found almost 99 percent opposition.” -H. Lee Moffitt