Editor’s Note: This article first appeared in the Summer/Fall 2021 issue of Forward magazine, which is published twice a year by Fox Chase Cancer Center.

A Mission to Fight Disparities in Cancer Care

Camille Ragin had nearly completed her doctorate when she received a final telephone call from her Aunt Herma before she passed away from breast cancer. “I remember the telephone call to this day. After telling me how proud she was of me, she said, ‘I want you to fight this thing, cancer. I want you to do that research and find the cure so that other people, especially those in the Caribbean, will not have to suffer the way I did.’”

Not long after her aunt’s passing, Ragin ended up pursuing that path and is now a professor in the Cancer Prevention and Control Program at Fox Chase Cancer Center.

Ragin grew up in Portmore, Jamaica, just outside the capital city of Kingston. It was there that her Aunt Janet, a cytotechnologist, introduced her to the microscope. “It was intriguing to see cells in that context,” said Ragin. She went on to excel in biology at her all-girls high school before moving to New York City to earn an undergraduate degree.

Ragin then moved to Virginia and trained to become a medical technologist. Several years later, she went to the University of Pittsburgh’s Graduate School of Public Health, where she earned her doctorate in infectious diseases and microbiology and Masters in Public Health (MPH) in epidemiology.

Through a career development program at the University of Pittsburgh, Ragin was able to be enrolled in her MPH program while completing a postdoc in the Human Genetics Department at the university. Her second postdoc turned out to be the most influential, because it led her into her present work. “I knew then that the racial disparities that impacted Black individuals would be my focus and passion. That was how the African Caribbean Cancer Consortium was born,” Ragin said.

“Blacks have the highest incidence and death rates and the shortest survival for most cancers in comparison to all other racial and ethnic groups,” said Ragin. “I have firsthand knowledge that although Africa is the common ancestral origin of Black subgroups, migrants to the United States, whether forced or voluntary, have differing health characteristics; cultural health beliefs, attitudes, practices; and genetic admixture.”

The consortium, known as the AC3, focuses on the contribution of viral, genetic, environmental, and lifestyle risk factors to cancers in populations of African ancestry. The goal of the AC3 is to advance the science of cancer prevention and control through the promotion and facilitation of collaborative research between investigators in the United States, the Caribbean, and Africa.

To date, the AC3 consists of more than 150 member collaborators from 17 institutions in the United States, and 23 countries in the Caribbean and Africa. Ragin acknowledged that this and other accomplishments are due to a great deal of support from many people.

“So many people inspired me over my life,” said Ragin. “My parents have been encouraging in every way, and my husband Mike has been so supportive, allowing me to spread my wings.” Although her workload is demanding, family time, and time for herself, is a priority. “I am a workaholic, but that is something I’m trying to change,” she said. Ragin plans to get a new piano and start playing again as a stress reliever.

In addition to the AC3, Ragin’s laboratory established the Cancer Prevention Project of Philadelphia (CAP3) to serve as an additional resource addressing racial disparities in cancer.

CAP3 is a community engagement effort that led to the development of a successful model for population-based health disparities research studies. The program provided the community with information about incorporating cancer-prevention practices and screening into their everyday lives. It also provided a better understanding of the importance of cancer disparities research.

Through her specific research on head and neck cancer genetics and biomarkers of environmental exposures, Ragin’s research is among the first to provide clear evidence of the distinct causes of cancers that arise in the oropharynx, the part of the throat that is at the back of the mouth, due to the human papillomavirus (HPV).

“Our pioneering efforts to examine HPV-positive oropharyngeal cancers among Blacks have led to the identification of a distinct molecular profile that may influence survival,” said Ragin. “My lab has demonstrated for the first time that biological factors such as genetic ancestry influence DNA repair and DNA damage response gene expression.”

Ragin said this groundbreaking research is her way of giving back to her community. “My passion is to continue to do something impactful that improves the health of Black people everywhere,” she said. 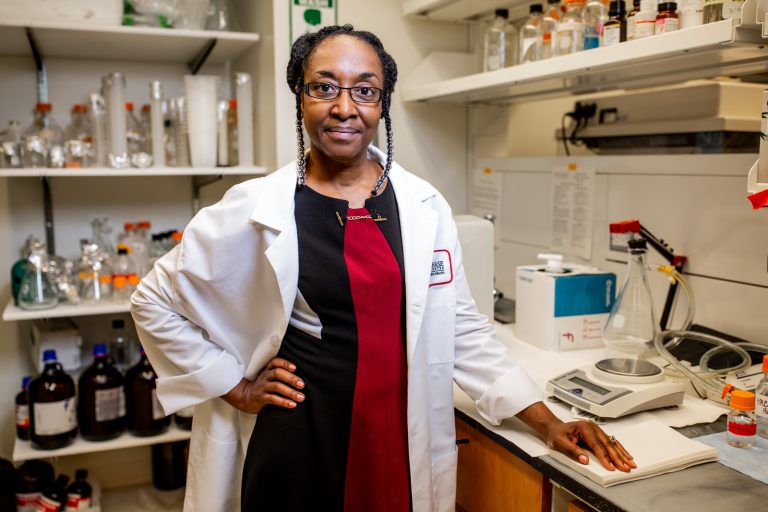