On the occasion of her induction into the KU Women’s Hall of Fame, Roy Jensen, MD, director of The University of Kansas Cancer Center, said that Fabian’s contributions have been enormous.

“I have known Carol Fabian since the mid-1980s, and without question, she is one of the top breast medical oncologists in the country,” Jensen said. “Carol has defined excellence in clinical practice and provided leadership in translational research at KU Medical Center for more than three decades. I can think of no one more deserving of this honor than Carol.”

What is behind Fabian’s success story? It was the realization early in her career that prevention of breast cancer – rather than just treatment – may be the best way to save lives.

Fabian received her medical degree in 1972, when few of her classmates at the KU School of Medicine were women. After an internal medicine residency and an oncology fellowship, she joined the KU Medical Center faculty as an assistant professor.

Even as recently as the late 1970s and early 1980s, when Fabian began her career as an oncologist, breast cancer was a death sentence for about half the women diagnosed with the disease.

“Many of the patients I treated for breast cancer were women with school-age children or those at the height of their careers,” Fabian said. “Too many young women eventually developed metastatic cancer and died of their disease, despite seemingly early detection or aggressive therapy after diagnosis.”

The desolation of treating breast cancer was taking an emotional toll on both Fabian and her family. Her husband, Steve Roweton, suggested that she either find a different career path or alter her approach to her oncology practice. She opted for the latter, combining a focus on prevention research with her breast cancer treatment practice.

Genetic testing for cancer predisposition didn’t exist in the 1980s and early 1990s, and the concept of breast cancer prevention with drug therapy like tamoxifen was just beginning to be tested. However, Fabian thought it unlikely that women would embrace drug treatments or preventive surgery unless they knew they were at high short-term risk. Fabian wondered if it would be possible to determine who was at highest short-term risk for breast cancer by detecting precancerous cells in seemingly normal breasts.

“I thought close relatives of patients with breast cancer were more likely to harbor precancerous cells in sufficient volume to be detected by random sampling,” Fabian said. “I suspected they would also be the most ideal candidates for prevention therapy if pre-cancer were detected.”

In 1989, she founded a research clinic for women at high risk for breast cancer where women with a family history of breast cancer – or those with a prior treated breast cancer– could have their healthy tissue sampled by a minimally invasive procedure called random periareolar fine needle aspiration (RPFNA). The women had their cells analyzed by a cytopathologist and were then followed over time to see if they were more likely to get cancer.

“This was a radical departure from the accepted dogma of the time,” Fabian said. “A biopsy or fine-needle aspiration was only performed on a palpable mass or an abnormality on a breast image. Everyone ‘knew’ that if you were not directing your needle to an abnormal area on a mammogram or physical exam, all you would get is breast fat, not breast ductal cells.”

Early on, Fabian was ridiculed by many fellow academicians when she proposed that scientists sample and examine healthy breast tissue via RPFNA to determine if they could predict which women would develop breast cancer within five years. In fact, she was consistently able to acquire ductal cells in high-risk women under 60.

In 2000, Fabian and her collaborators published results in the Journal of the National Cancer Institute on the first 500 patients who had undergone tissue sampling by random fine needle aspiration and had then been tracked for five years.

“We found that a pattern of precancerous cells, called hyperplasia with atypia, found in women without a clinical breast problem predicted short-term risk of breast cancer,” Fabian said.

As a result of Fabian’s research, the National Cancer Institute also saw an opportunity to use RPFNA as a method to test new drugs for cancer prevention and began to fund more RPFNA research. In the meantime, the procedure Fabian developed for sampling benign breast tissue has been taught to numerous researchers across the country, and it was used in a large national trial performed by a co-operative group to study the potential effectiveness of a diabetes drug, metformin, in preventing breast cancer.

Fabian’s group is also studying the effect of several other drugs on women at high short-term risk for breast cancer.

“Some of our patients have told us they were more interested in natural products, physical activity and weight loss as possible therapies,” Fabian said. “Research shows that a lack of exercise and obesity increases risk for breast cancer.”

A passion for prevention takes a team

Fabian is quick to point out that scientific discovery is nearly impossible without collaboration. She said her early efforts around RPFNA were supported by leaders in clinical and surgical pathology.

In her 38-plus years on the faculty of the School of Medicine, Fabian has been involved in training the next generation of oncologists and clinical researchers. Many of the academic and community practice physicians specializing in breast cancer who are part of the active breast cancer research unit in the medical oncology division are her former fellows.

Fabian said her family has been her rock throughout her career.

“For the past 38 years my husband, who is not in the biomedical field, has lived with our kitchen table covered with stacks of paper relevant to the latest grant or manuscript,” Fabian said, adding that his answer to her preoccupation with medicine and research was to take up golf.

Fabian’s favorite work locale has not changed, although she had to buy a larger kitchen table to accommodate the three grandchildren in addition to her two grown children.

“I am not terribly good at time management or at saying no,” she notes. “My family will probably have ‘just one more minute’ engraved on my tombstone. My parents, in-laws, and entire extended family, most of whom live in Kansas City, have always been extremely supportive of my work and willing to help out with whatever needs to be done.”

Fabian said that her support team is one the main reasons she has turned down other opportunities over the years.

“Women have a lot of things going on in their lives,” she said. “It’s difficult to be a clinician, a mom, a wife and also do research. There’s very little room left for you. You have to accept that your research career may have fits and starts, and that’s okay. Just keep working.”

A role model for young women

In addition to her research, Fabian has won numerous awards for her work as a clinical oncologist. Sandi Sanchez chose Fabian as her oncologist when she was diagnosed with breast cancer in 2010.

“She’s a great doctor and a straight-shooter,” Sanchez said.

Though Sanchez had her biopsy done at The University of Kansas Hospital, the results went to her internist at another hospital, who called her with the news she anticipated. Sanchez’s opinion of Fabian was solidified when her physician was impressed with her choice to lead her team.

“When I told my doctor my plans, it just reaffirmed what I already believed,” Sanchez said. “His response was, ‘She’s a pioneer. I can’t think of anyone better and I can’t offer you anyone better.’ I was very fortunate to have her as my oncologist.”

Fabian oversaw Sanchez’ treatment, and Sanchez was so grateful that she nominated Fabian for the local Girl Scouts Pearl Award, which Fabian won in 2013. The award honors extraordinary women for their contributions in science, technology and math.

“Dr. Fabian is a great example of a woman who is a great role model for girls and young women,” Sanchez said. “Girls need to know that they can become scientists and researchers. Girls need women like Dr. Fabian to look up to.”

Fabian’s advice for girls who want to be a scientist—first find your passion.

“You do not have to have a PhD. You DO have to want to do research,” she said. “Get an idea of what it is like by connecting with somebody who does research and is good at it. Finally, develop a network that will support you.” 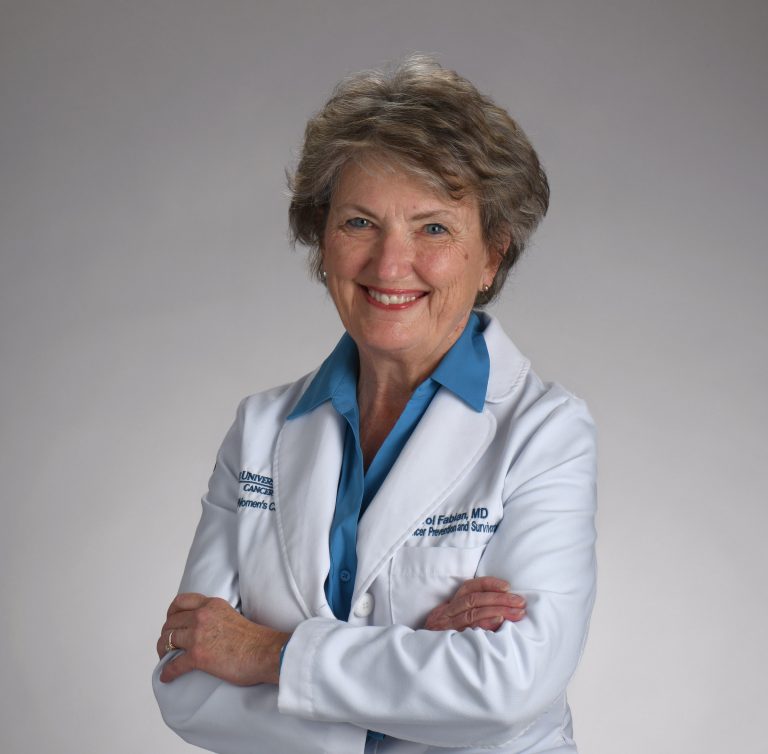