Baruch S. Blumberg, MD, PhD, Wins Nobel Prize in Medicine for His Discovery of the Hepatitis B Virus

Editor’s Note: This article, which was first posted on the website of Fox Chase Cancer Center in 2011, discusses the work of Baruch S. Blumberg, one of two Nobel Prize-winning scientists in the history of Fox Chase.

Baruch S. Blumberg, MD, PhD, Wins Nobel Prize in Medicine for His Discovery of the Hepatitis B Virus

Blumberg conducted work that helped establish a link between primary liver cancer and hepatitis B, and also led to the development of a vaccine for the virus

The research, discoveries, and vision of Nobel laureate Baruch S. Blumberg, MD, PhD, (1925-2011) have had a far-reaching impact on public health around the globe.

He was responsible for major insights into the pathogenesis and prevention of hepatitis B infection—which was endemic in many populous nations, especially in Asia and Africa—and the fatal liver diseases associated with it. These include primary cancer of the liver, or primary hepatocellular carcinoma, one of the world’s three most deadly cancers, with death often occurring less than a year after diagnosis. Worldwide, primary liver cancer is the sixth most common cancer in men and the eleventh most common cancer in women.

Blumberg was awarded the 1976 Nobel Prize in medicine for his 1967 discovery of the hepatitis B virus, and he received many subsequent honors, including election to the National Academy of Sciences, the American Philosophical Society, and the National Inventors Hall of Fame.

A member of Fox Chase Cancer Center’s staff since 1964, he was named as the first Fox Chase Distinguished Scientist and senior adviser to the center president in February 1989. From October 1989 until 1994, Blumberg was also master of Balliol College at England’s Oxford University, where he received his doctorate in biochemistry in 1957.

Initially Blumberg was interested in inherited variations in individual susceptibility to disease. His studies of blood samples from various countries turned up a mysterious protein that later proved to be the outer coat of the long-sought hepatitis B virus.

Blumberg and his colleagues at Fox Chase promptly developed sensitive blood tests that allowed blood banks to screen for hepatitis B and prevent transfusion-related cases. They also devised a new way to make a vaccine against the virus, harvesting its outer protein from the blood of chronic carriers.

This approach was critical to the development of a hepatitis B vaccine at that time, since the virus itself could not be grown in tissue cultures until Fox Chase researchers invented a new technique in the 1980s.

Meanwhile, in field trips to Africa and elsewhere, Blumberg and others were amassing important evidence of the link between primary liver cancer and hepatitis B. The virus is now thought to cause at least 80% of liver cancers as well as many cases of cirrhosis.

Clinical development of the vaccine proceeded, and by 1980 it had successfully passed a series of rigorous animal and human trials. By the time it received Food & Drug Administration approval in 1981, it was clear that this was the first vaccine capable of preventing a human cancer.

Since then, a number of nations where hepatitis B is a major public health hazard—from Mediterranean countries to China—launched vaccination programs in consultation with Blumberg and his colleagues. Targeted to infants, these prevention programs may reduce the incidence of primary liver cancer by as much as 80% or more in future generations, as well as preventing millions of cases of acute and chronic hepatitis.

To address the needs of the estimated 350 million adults who are hepatitis B carriers (largely the result of infection as infants), the Fox Chase team also developed a model liver-cancer prevention program at Fox Chase. This program screens those at high risk for infection, vaccinates children of carriers and monitors the carriers to detect any liver cancer that develops early enough for surgery to be curative.

Ongoing research includes efforts to develop a drug active against chronic hepatitis B and genetic studies to further refine risk factors for the development of liver cancer following chronic hepatitis infection. Currently focused on genetic susceptibility among Native American populations in Alaska, these population studies bring the research full circle to Blumberg’s goals when he initially discovered the hepatitis B virus.

Fox Chase Cancer Center honored the lifetime achievement of Blumberg on the occasion of his 80th birthday with a special scientific symposium on Thursday, June 16, 2005, examining his Nobel Prize-winning research and his more recent work with the National Aeronautics and Space Administration (NASA) as the first director of the Astrobiology Institute.

Blumberg died of a heart attack Tuesday, April 5, 2011, shortly after delivering a keynote address at a NASA conference in California. 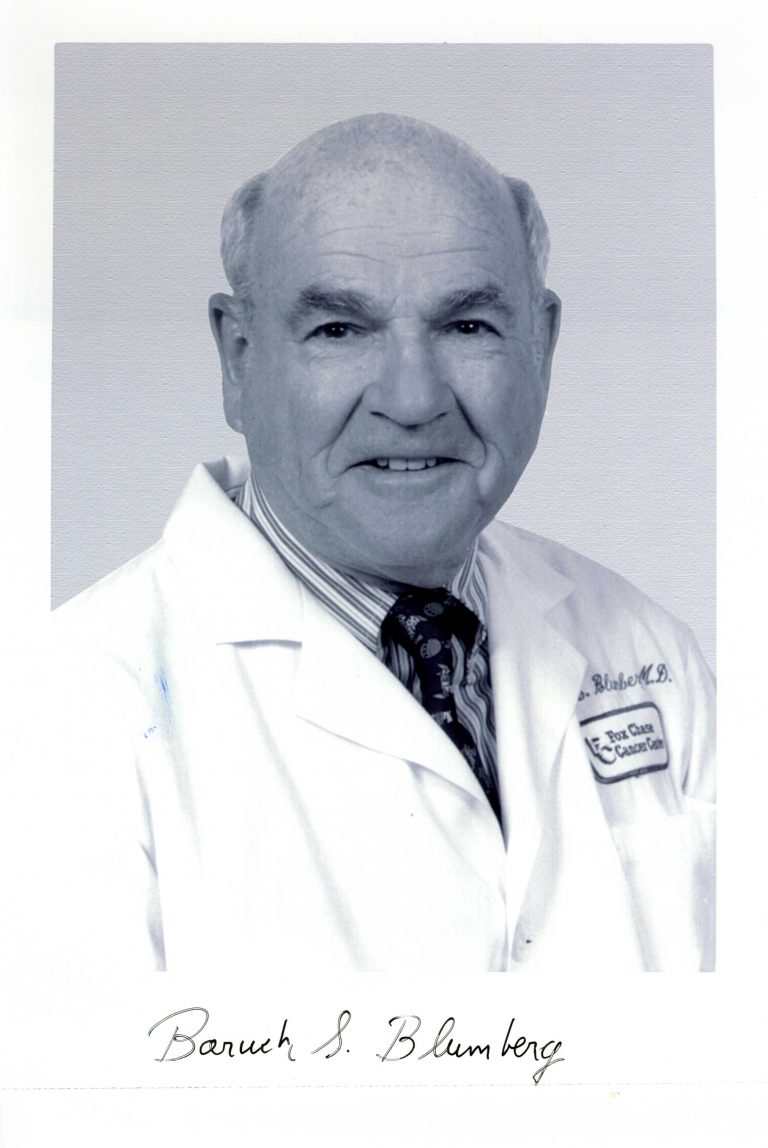