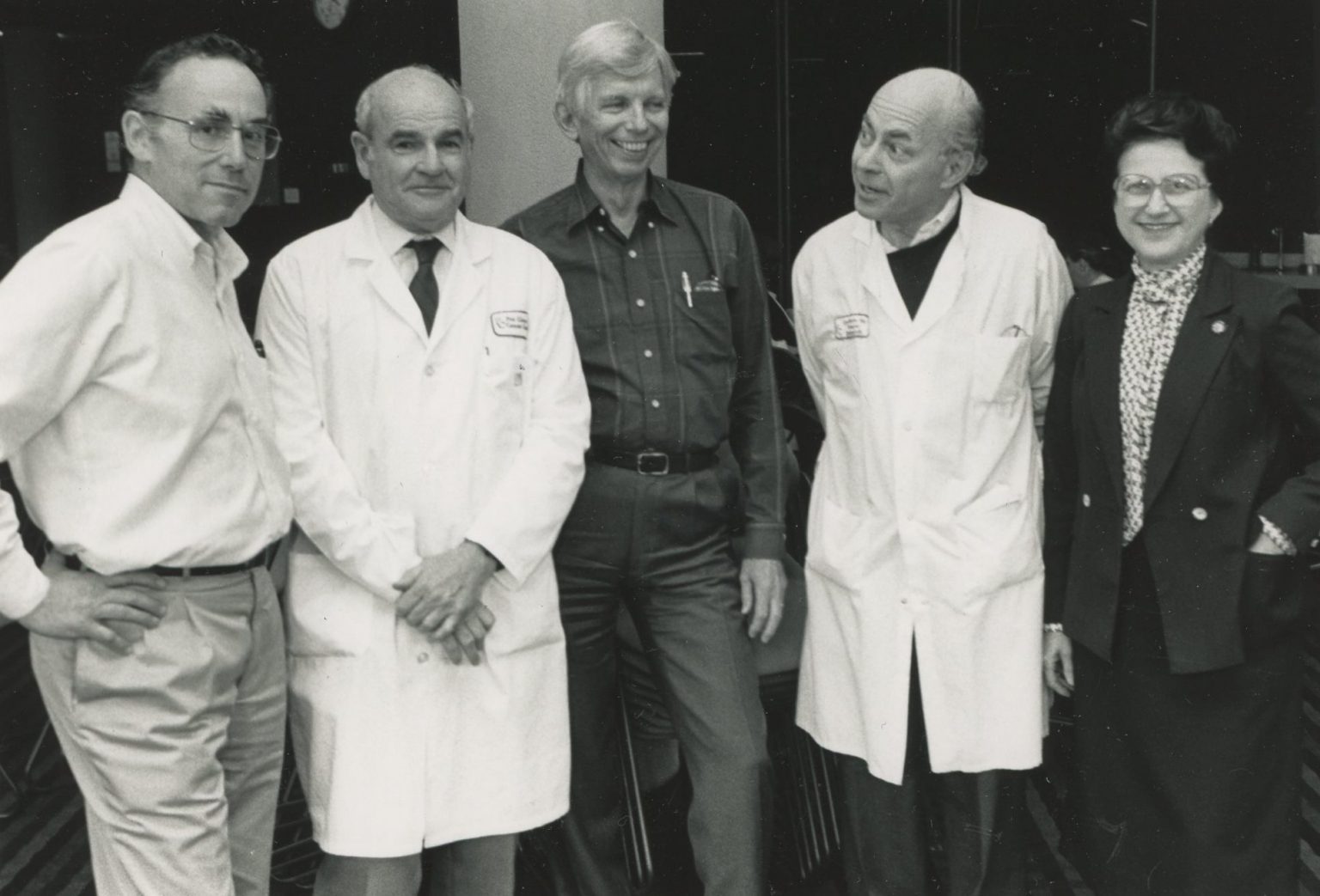 The Institute for Cancer Research (ICR) was and is a hotbed for basic and translational discovery. Initially a standalone institute, the ICR is currently the main science engine for the Fox Chase Cancer Center.

Editor’s note: This article is accompanied by a photo archive.

Despite its modest size and budget, ICR, which thrives on small-scale, old-school science in the best sense of those terms, has historically punched well above its weight. This is due largely to its ability to attract top talent. Starting in the late 1960s, Tim Talbot, the longtime scientific director, had the wit and the means to assemble a veritable “Murderers’ Row” of cutting-edge cancer researchers that set the tone for the ICR for decades to come.

What he offered these scientists wasn’t so much better money, more modern equipment, or roomier space, though he did offer some of that. No, the real draw was the chance for these advanced thinkers to realize their dreams, unfettered by other institutional responsibilities, and to work alongside an absolutely stellar group of creative people who, over time, have had an outsized impact on our understanding of the genetic and cellular bases of tumorigenesis.

At one point, six of his 10 recruits ended up in the National Academy of Sciences. That daunting record is unlikely to be equaled and has served as a useful check on the egos of his successors, myself included.

Early giants included the structural biologist Lindo Patterson, as well as the developmental biologists Robert Briggs and Thomas King. Patterson developed analytic tools for protein structure determination that are still used today. He (and later his postdoctoral fellow, Jenny Glusker) held an NIH grant entitled “The Structure of Proteins” that was continuously funded for more than 50 years, likely a record.

Among them, these scientists would eventually win two Nobel Prizes, the Lasker Award, the Kyoto Prize, two John Scott Awards, the GM Cancer Research Prize, the Szent-Györgyi Prize, the William Proctor Prize, and countless other prestigious awards. More importantly, they fundamentally changed the way we think about cancer.

At seminars, these folks tended to sit together, usually in the front row, and they presented a formidable front for anyone giving a talk or leading a faculty seminar.

Bob Perry, who to me represented the epitome of the scientist’s scientist in terms of the absolute rigor of his work and the clarity of his writing, was the most fearsome.

Before a seminar began, he would inspect the speaker’s slide carousel. If there were too many slides for his liking, he would return to his seat with a scowl. He had an ironclad rule: Just one story per seminar. And woe to the speaker who broke it.

If, in mid-seminar, a speaker dared utter the words “and now I’d like to switch gears,” Bob would stand up and walk out. (Needless to say, in my 30 years at Fox Chase, I have never told more than one story per seminar.)

Bob also ran a faculty journal club (“Information Exchange”) at which slides were forbidden. One could only present figures using a chalk board or, if absolutely required, acetate transparencies. These sessions were billed as formal; one new investigator was so intimidated that he showed up for his first presentation wearing a tuxedo.

When I was looking for a faculty position in 1991, the ICR and Fox Chase had not been on my radar. But, having been persuaded to come for a visit, I began to change my mind when Al Knudson, already relatively advanced in years and rather frail, insisted on carrying my wife’s bags. Upon seeing this, she started to elbow me in the ribs, saying “Guy’s won the Lasker Prize, you carry the bags!”

Al’s office was, by choice, down in the basement of the ICR. It was windowless, cramped, stuffy—surprising for a scientist of his stature. Seeing his little hole-in-the-wall office was the moment when I decided that this was the place for me. Also, I liked that Ernie Rose had blue fingers from all the gels he was running. I quickly learned that it was very much a Fox Chase tradition for principal investigators to do their own experiments with their own hands. Some of us still do, myself included.

One of the old and quaint ICR traditions (sadly, on hiatus since COVID entered our world) was afternoon tea. This event began as a small affair in the library of our first scientific director, Jack Schultz. Schultz was the last graduate student of the geneticist Thomas Hunt Morgan, and he held court every afternoon at 3:30. Later, the tea was moved to the hospital cafeteria. Wherever it was, one could be sure to find one or more of the senior scientists holding forth.

A particularly frequent guest was Barry Blumberg, who would engage in topics as diverse as the relative virtues of deductive versus inductive science, the evolutionary origin of hepatitis viruses, and why the Phillies would never win another pennant in our lifetimes. His frequent opening line—“I’m glad you asked that question”—launched hundreds of interesting conversations.

Blumberg was gregarious and outward facing. His work was out in the field, in the grand tradition of a Darwin or Humboldt. After he died, I found among his papers a self-illustrated notebook he kept that documented the many interesting plants he encountered on his travels to Africa, Alaska, and Australia.

His stylistic opposite was Ernie Rose, a natural born lab rat, happiest when extracting proteins and metabolites. Barry advised new faculty to get out into the world; Ernie, to remain at the bench.

Bea Mintz, another one of these legendary scientists, was a force of nature. After I gave my job talk, someone mentioned that Bea had enjoyed it. I shrugged, thinking “Why shouldn’t she like it?”

It was only when I got to know her better that I realized that Bea, like Mikey in the old Life cereal commercial, rarely liked anything. That is to say, her standards were incredibly high, and I should have been suitably awed that she didn’t think badly of me.

Bea was notoriously demanding of anyone brave enough to join her lab group. On their first day, she would take out a map and a compass and plot a one-mile circle around the institute. Her trainees were instructed to find an apartment within the circle.

On the other hand, every year she took off the entire month of August and expected her staff to do the same. She was also most generous with her time. An invitation for an afternoon of discussion meant the entire afternoon, and maybe, if you could keep up with her, part of the evening too.

The current research programs at Fox Chase Cancer Center can all be traced back directly to the working groups established by the Murderers’ Row.

While the ICR to which they belonged is now integrated into the larger Temple University system, it nevertheless retains many of the unique features that helped it achieve greatness.

These are: the lack of a departmental structure and its attendant hierarchy; a liberal definition of what constitutes cancer research; the intense focus on discovery as opposed to teaching or other forms of institutional service, and the semi-secluded, park-like setting of the campus.

These features have contributed to a remarkable sense of collegiality and mission that is nearly palpable. Visitors often comment on this unique atmosphere, and it is, in my opinion, the ultimate source of our success.

2018 State of Cancer Care in America

Mark Dewhirst “The Human Synapse” Retires After More Than 30 Years