She pioneered work in several fields, including developmental genetics, gene-transfer technology, and epigenetics

Big questions. That’s what Beatrice Mintz, PhD, the former Jack Schultz Chair of Basic Science at Fox Chase Cancer Center, has dedicated her career to answering. Small questions, in her opinion, are not worth the time or effort. As a result of this philosophy—and through sheer force of personality—Mintz’s opus, according to Jonathan Chernoff, MD, Chief Scientiﬁc Officer at Fox Chase, contains the platforms of several ﬁelds, including developmental genetics, gene-transfer technology, epigenetics, and the tumor microenvironment.

“To pioneer in one major area of science is remarkable. But more? Otherwordly,” he says. An elected member of the National Academy of Sciences since 1973, Mintz, now 97, has collected scientiﬁc honors that are coveted, prestigious, and rare. But accolades were never the point. The point, Mintz says, is “simply the pursuit of a series of questions that I’ve enjoyed answering.”

In 1960, Mintz left her teaching position at the University of Chicago to accept a post at Fox Chase to do full-time research. It was an exciting opportunity to answer a question she’d been pondering since her days as a PhD candidate at the University of Iowa in the 1940s.

The question was: How can a complex individual arise out of a small number of cells in an embryo—and how do these cells become so widely diversiﬁed and specialized?

“The question had been asked for decades, but it was still being approached with classical methods, such as adding dye to a cell and tracking its path,” Mintz said. “But I thought the only really relevant marker for tracing how cells diversiﬁed was the gene.”

“She knew that the genetic differences would serve as markers of development—creating a path she could trace,” Chernoff explained.

Mintz observed that normal development is a hierarchical process, with ever-more specialized clusters of stem cells expanding clonally, proliferating and differentiating in an orderly manner. “Recognizing that stem cells could generate a complete organism not only told us a lot about development, but also pointed to the possibility of using such cells to replace defective cells in humans,” Mintz said.

“That kind of innovative thinking was unheard of in the 1960s,” said Margaret Foti, PhD, MD (hc), a Temple graduate and CEO of the American Association for Cancer Research (AACR), the world’s oldest and largest cancer research organization.

Mintz then asked herself another big question: Is cancer basically an aberration of development in which stem cells multiply rather than differentiate?

To answer it, Mintz created special allophenic mice that revealed that the answer is yes. Carcinogenesis favors proliferation, not differentiation.

“Very few scientists believed in the clonal basis of cancer in the 1960s, but that’s precisely what Dr. Mintz’s findings demonstrated,” Foti explained. “Observing that cancers develop from a single cell rather than a combination, she established clonal regulation as cancer’s fundamental unit of development.”

Then something really interesting happened. Mintz introduced teratoma stem cells into a normal mouse embryo, expecting the mouse to develop the cancer so she could analyze its progression. But to her surprise—and that of scientists worldwide—normal, tumor-free mice resulted, with both genetic cell strains present in all tissues.

It defied logic. How could animals produced with cancer stem cells possibly be cancer-free?

Mintz realized something crucial: The normal embryo into which she’d inserted the teratoma cells had somehow reprogrammed cancer cells to develop normally. And with this, she deduced something unequivocally important: Teratoma stem cells are chromosomally normal—but can be developmentally induced to become cancerous.

In subsequent work, Mintz replicated the results of that first experiment, proving what she’d posited. The stem cells of an early carcinoma can be normalized if transferred to a normal environment appropriate for their developmental stage.

Today we know that a gene can express itself in many different ways. Today we recognize a complex confluence of factors that go well beyond the gene itself. And Mintz was among the first to recognize this, to appreciate the prodigious influence the microenvironment has on the behavior of cells — at a time when, as Foti points out, the fields of epigenetics and the tumor microenvironment did not even have names.

“Who else was even working with mammalian embryos in the 1960s?” Foti says. “The technology to manipulate them didn’t even exist. She had to invent it.”

But what Foti calls “revolutionizing the tools and techniques of molecular biology” was, for Mintz, simply a means to an end.

“I came from a do-it-yourself family—and I enjoyed the fact that I had to work out everything myself,” Mintz said.

And “myself” is precisely what she means. A scientist of Mintz’s stature could easily command an army of assistants, but Mintz, as Chernoff said, “prefers to go it alone. She is a solo act par excellence. Unfettered, one might say, by the limitations of others.”

Meticulous and precise, she maintains impeccable standards. “This gives her a somewhat dichotomous personality,” Chernoff said. “She is delightful company—smiling, laughing, a wonderful raconteur. But she can also be highly critical—which can be off-putting—until you remember that she subjects herself to the same scrutiny.”

Bea Your Own Boss

Anna Marie (Ann) Skalka, PhD, was Fox Chase’s Director of Basic Science Research for 22 years. When she took the job in 1987, her mentor, Barbara McClintock, PhD—the 1983 Nobel Laureate in Medicine or Physiology—gave her some advice.

“You’ve got someone very special in Philadelphia—and you’ve got to take care of her,” Skalka recalled McClintock saying. “I thought that was a wonderful tribute from one legend to another.”

And what it really meant, Skalka learned, was to do anything Mintz asked—but otherwise stay out of her way.

“On paper, I was Bea’s boss. But no one is Bea’s boss except Bea,” Skalka said. “She’s entirely self-directed. With unrivaled powers of observation and deduction. An uncanny ability to think outside the box.”

“For instance, before anyone else, she observed that melanoma cancer cells make abnormal proteins. This was a novel insight. Absolutely no one else was talking about tumor-associated neoantigens in those days. Now everyone is,” Skalka said.

Another example of her futuristic vision: In 1974, she and Rudolf Jaenisch, PhD, a visiting fellow at Fox Chase, created the first mice ever to harbor foreign DNA—in this case, viral DNA.

In the 1980s, Mintz became one of the world’s first to create transgenic mice — introducing human DNA into a fertilized mouse egg — enabling the DNA to be transmitted to offspring.**

“Her technique to create animal models of human cancers changed everything,” Chernoff said. One of the most important is her model of cutaneous melanoma that mimics the human disease. An aggressive cancer, it causes more skin cancer-related deaths than any other kind of skin cancer. Mintz’s mice, a staple of melanoma research worldwide, may hold the key to future advances.

Margaret Foti—one of the world’s most influential voices in cancer research—called Mintz’s contributions “groundbreaking.” “Dr. Mintz has had a major influence on the entire landscape of cancer research, with scientific insights prompting new directions in developmental cancer biology and genetics,” Foti said. “She’s a pioneer not just in developmental genetics but in the developmental genetics of cancer—shaping our understanding of stem cell behavior and the tumor microenvironment. She’s provided us with many important scientific tools and techniques, including allophenic and transgenic mice that have created an unprecedented opportunity to study cancer in a living organism throughout its life. Simply extraordinary.”

“And I was witness to the extraordinary in 2012,” Foti added, “watching Dr. Mintz, then 91, captivate an audience of 15,000 when the AACR gave her the Lifetime Achievement Award. Beatrice Mintz is a compelling personality. What charisma!”

Mintz has been celebrated with many awards and with fellowships in elite scientific societies. Five colleges have awarded her honorary doctorate degrees. Her AACR honors are particularly important to her. But the honor closest to her heart is probably the Jack Schultz Chair in Basic Science at Fox Chase.

Jack Schultz, PhD (1904-1971), was a geneticist and biochemist who came to Fox Chase in 1942 and chaired the Division of Biology from 1957 to 1969. He, too, served on important editorial boards and committees. Like Mintz, he was an elected member of the National Academy of Sciences.

After his death (of a heart attack—in his lab at Fox Chase—in 1971), Fox Chase established a chair in his honor to recognize a scientist of outstanding distinction. There was no question about who that should be. Mintz was installed in 2002. She stepped down in 2019.

“It was the only time I ever saw Dr. Mintz in tears,” Chernoff recalled. “She and Jack were very close. It was Jack who’d recruited Bea to Fox Chase. He enthusiastically supported her plan to produce mice of two different genetic strains—and watched as she pursued that plan with single-minded rigor unequalled.”

Born on January 24, 1921, in New York City to immigrant parents, Mintz values “originality, bravery, and thinking outside the box.”

But she did not set out to become one of the first to recognize the central role of stem cells in cell development and cancer. Nor to shatter the belief that malignant cells are irreversibly abnormal. Nor to become one of the most inventive genetic engineers the world has ever seen.

It was not her goal to advance the world’s understanding of genetic modification and cellular differentiation. Nor to inspire scientists to study the role of the microenvironment.

It was never her intent to refute or confirm any theories. She merely wanted to answer some important questions.

Because what she prizes most (along with the Shultz Chair) is simply “the freedom to go from one really tantalizing question to the next, and to recognize and follow clues along the way.”

** Mintz and Ralph Brinster, PhD, of the University of Pennsylvania, independently developed techniques to create transgenic mice—now staples of research in labs worldwide. 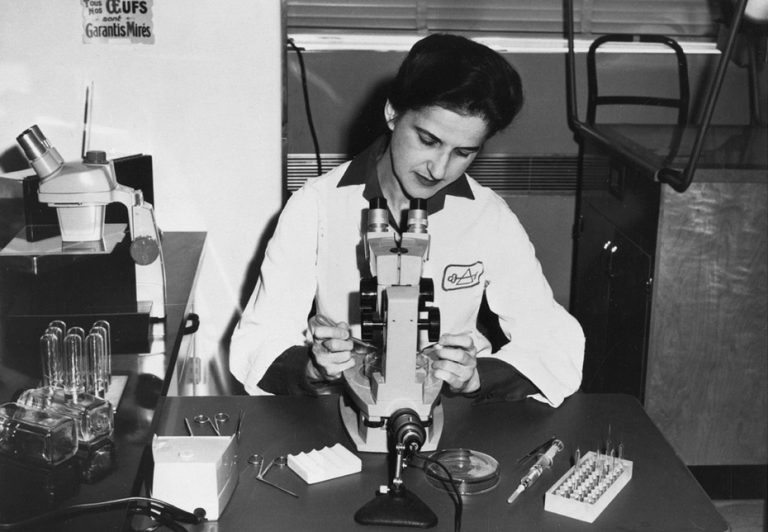