“At the end of June, I took a deep breath. I was exhausted,” smiled Moore. “Totally exhausted. And I said to myself, “I’m doing the right thing.””

In early August, Moore had an ablation to treat atrial fibrillation. It went well and the prognosis is good. A couple weeks later, the distinguished professor of Medicine was back at his office on a two-day-a-week schedule slowly getting things in order for the final year of his research career.

Moore was born in 1944 in the city of Greenville, South Carolina, when his father was in flight training there. He grew up in Rochelle, Georgia with his mother, stepfather, and three half-brothers.

“My father,” Moore shared, pointing to a Martin B-26 Marauder model plane by the window, “was a World War II bomber pilot. He was killed in action when I was less than a year old.”

Not far from the plane, a treasured pair of angels from Venezuela and an intricate wooden owl carving — both gifts — were on display. Angels are said to be benevolent beings that guide and protect. Owls, of course, are wise.

Moore’s legacy of service to patients at Duke — combining compassionate care and medical wisdom — would no doubt make his father proud.

The self-described “southern boy” earned his BS degree at Emory University in Atlanta, then ventured north — earning his MD at Johns Hopkins University in 1970. He would complete a three-year medical residency there with a two-year gap serving in the Public Health Service Commissioned Corps in Hawaii.

Moore “solidified” his interest in cancer when he was assigned to an NIH-funded epidemiology study in Hawaii — the Japan-Hawaii Cancer Study — comparing cancer in Japanese immigrant men in the state to cancer in Japanese men in Japan.

Still depressurizing from a “very intense internship” at Hopkins fueled by coffee, and with more free time in this new post, his wife Alice, whom he’d met and married while in medical school, pushed him to find a hobby.

Moore joined a marine diving club, mixing with marines who went back and forth to Vietnam, an air force colonel, a couple of Phantom jet pilots and one nuclear submarine officer.

He also came to enjoy playing handball, often with “Odd Job” from Goldfinger.

“Hawaii was a great place to be, and a good cultural experience,” reflected Moore, who also developed other hobbies, including collecting the Japanese Sumida pottery and Chinese Mud Men figurines that today occupy his office shelves, and finding and trading cowrie shells.

Once his tour of duty in Hawaii was finished, he returned to Hopkins to complete his medical residency and in 1975 came to Duke for his Hematology/Oncology fellowship.

“That was back in the dark ages,” Moore half-joked.

Moore began his medical practice in the Division of Internal Medicine, a late ‘70s through ‘80s multi-specialty group of clinicians at Duke.

Concurrently Moore participated in two large cooperative groups — the Southeastern Cancer Study Group and then the national Cancer and Leukemia Group B — where his main focus was leukemia protocols.

“Chemotherapy had begun to come into its own,” he explained, “as not only a treatment but a potentially curative modality, sometimes in concert with radiation, which had been around for a while. While effective, the side-effects of chemo were toxic.”

For example, chemotherapy regimens being used to treat Hodgkin Lymphoma and other cancers were tough to take. It wasn’t until 1991 that the first anti-nausea drugs and drugs to boost white blood cell counts were introduced into the clinic; making treatment more comfortable and safe.

“These were major changes,” said Moore. “I can remember one sarcoma patient I had, who every time I treated him he would be terribly sick. We’d give him just enough medicine that he went to sleep. He stayed asleep, basically, through his whole treatment and he always came back in with neutropenia (low white blood cell count). Then he started receiving the anti-nausea medicine and the G-CSF. He was wide awake, he didn’t get sick, and he was never readmitted with neutropenia. He eventually died of cancer, but the ability to make his life better during his treatment was pretty dramatic.”

In the ‘90s, Moore was one of four physicians that made up the Hematology Oncology Associates group. They treated not only leukemias and lymphomas, but many solid tumors as well. As knowledge about cancer grew and available treatments advanced and expanded, cancer physicians at Duke who were previously generalist oncologists became subspecialized.

One of Moore’s mentors at Duke was Joseph Sokal, MD, who joined Duke in 1979 as a scholar-in-residence and stayed until his death in 1988.

“He was one of the grand old men in blood cancers who treated a huge number of patients with CML at a time when it was more of an art and well before the study for Gleevec came around in 2000,” said Moore. “Gleevec, a targeted therapy, changed everything. Leukemia went from a fatal disease, unless you went to transplant, to a disease that can now be treated with any one of five or six drugs.”

Moore was the Duke site principal investigator for the International Randomized Study of Interferon and STI571 (IRIS) (2010-2019), which found that CML could be treated effectively with one of several TKI inhibitors, including Gleevec.

Subsequently he was also involved with the LAST Study; monitoring CML patients who’d benefited from TKI inhibitor drugs and were able to stop therapy and remain off medication. He followed a few of these patients off-therapy until his retirement.

Gleevec was just the first of many targeted therapies.

“There are all kinds of ibs, abs, zols, and virs now,” explained Moore, referring to the ending letters of small molecule, antibody (immunotherapy), antifungal, and antiviral drugs now on the market.

Numerous other therapies, including like CAR-T cell therapy and TIL (tumor-infiltrating lymphocytes) therapy are also options for some cancers.

While chemotherapy still has a very important role in treatment, Moore said, there are some cancers that can be treated with non-chemotherapy regimens and still be cured.

“It’s a fantastic evolution!” he said.

Moore said he’s cared for hundreds of patients, many of whom he’s followed for more than 30 years.

Phil Austin, BSN, RN, a nurse at Duke for 33 years, was treated by Moore for aplastic anemia in 1992. At the time, he was told his blood disease was harder to treat than cancer.

“I honestly did not think I would live out that year, nor see my 3-year-old and 6-year-old grow up,” said Austin, an apheresis nurse. “It was actually my biggest fear that my wife would be a single mother of our two kids. The grace of God, the prayers of the faithful, and the excellent care by Dr. Moore and the 9100 team of caregivers is why I am here to tell about it.”

Jennell Abrahamsen, a Wilmington, North Carolina resident was first treated by Moore 18 years ago for non-Hodgkin lymphoma, and returned last year when it recurred.

“We love him. We would do anything for him,” said Abrahamsen, who cried at her appointment last May when he told her he was retiring. “He has healed and helped and saved so many people that I just am at a loss for words. He is so, very humble. I feel like he’s one of us even with all the education that the good Lord gave him.”

Dozens of patients, over many years, have paid tributes like these to Moore.

“No one wants to be told he has cancer. However, those terrible, frightening words are far easier to handle when your care is provided by Dr. Joseph Moore,” read a comment on Moore’s Duke Health page from a four-year CML survivor.

Some might find it hard to care for cancer patients at all, never mind for four decades.

“What you really have to realize is that they come to you for help and that you (the doctor) don’t have the disease,” reflected Moore. “And if you internalize the disease, that will harm you. That doesn’t mean you can’t take it seriously or can’t be specifically focused on anything that goes on.”

Brilliant, dedicated, considerate, gentle, strong, calming, thoughtful, distinguished, intellectual, collegial, motivational, extraordinary, inspiring, reassuring, gifted, and “an oncology Jedi”, are some of the ways his colleagues across Duke describe him. (see above slideshow for tributes)

At an interview last month, Moore paged through a booklet about Duke Cancer Institute’s history.

Many of those featured are colleagues he “grew up with” in his clinical practice and academic career.

There, he pointed out, was William Shingleton, MD (1952-1987), the founding director of Duke Comprehensive Cancer Center.

“Bill was a good friend to me and in his way, a mentor,” said Moore of the master cancer surgeon who passed away in 1987. “Even though I wasn’t going to be surgeon, he was very good to me personally.”

And there was O. Michael Colvin, MD, a physician scientist and friend who directed the cancer center between 1995 and 2002 and passed away in 2013.

There was Jon Gockerman, MD, who earned his medical degree in 1967 and was a long-time hematology/oncology colleague. He’s now retired.

“Joe’s contribution to patient care, teaching and research has been legendary these past decades,” said Gockerman, a professor emeritus of Medicine.

And there was William Fulkerson, MD, another of Moore’s earliest colleagues.

“I worked with Joe caring for patients together for over 30 years,” said Fulkerson, who’s now executive vice president of Duke University Health System and a nationally recognized specialist in pulmonary and critical care medicine. “He’s one of the most caring and committed physicians I have ever known.”

If Joseph Odell Moore, MD, could have had any career, he said he’d have still chosen medicine.

“There are still things I can do in medicine,” said Moore, who’ll stay on faculty for another year. “I’m taking a little time off to decompress and think about it some… And sleep late.”

He’ll also have more time to do other things he loves, including reading historical fiction, catching up on “The Americans” on Netflix, and working in the garden with his wife Alice. The couple, who will celebrate 50 years of marriage next March, are looking forward to traveling, relaxing at the beach, and seeing more of their three daughters, sons-in-law, and five grandchildren.

Three lab coats, at least one with an ink-stained pocket, still hang on the back of his office door awaiting their fate.

“They probably ought to be burned, but they’re kind of fun,” laughs Moore, who’s worn dozens over the years. “I’ll probably keep one just to use here so I have some credibility at least and don’t get tackled when I go up and down the employee elevators.”

Moore was presented with the Shingleton Award for Caregiver Partnership at the DCI Development Office’s annual Shingleton Society luncheon, held on October 11, 2019. This article was originally published on the Duke Cancer Institute blog on October 7, 2019. Moore attended the 50th Anniversary of Duke Cancer Institute kickoff celebration on April 14, 2022, remarking that he had joined Duke 47 years ago. 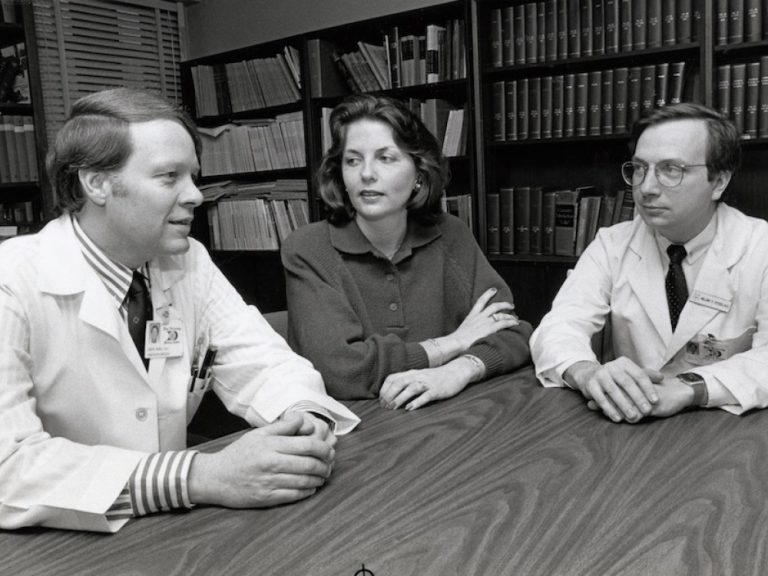 “If you internalize the disease, that will harm you. That doesn’t mean you can’t take it seriously or can’t be specifically focused on anything that goes on.” -Joseph Odell Moore

Jerome Yates: “We were like the Rodney Dangerfields of medicine in the late ‘60s.”