Prateek Sharma, MD, a gastroenterologist at The University of Kansas Cancer Center, has dedicated his entire career to better understanding a specific complication that can arise from longstanding acid reflux, a condition now so common that people typically self-treat it with over-the-counter products.

Acid reflux symptoms include heartburn and acid regurgitation, and it affects approximately 15 percent of the adult population. One out of 10 adults with longstanding acid reflux can progress to a condition in which the normal tissue lining the esophagus, after constant exposure to acid from the stomach, changes to resemble the lining of the intestine.

Here is why Sharma has authored more than 350 papers about it: the condition, known as Barrett’s esophagus, is a precursor to a subtype of esophageal cancer. Called adenocarcinoma esophageal cancer, this type of cancer is on the rise, and it comprises 80 percent of all esophageal cancer cases, up from 20 percent a few decades ago.

During the 1960s and 1970s, the esophageal cancer five-year survival rate was only 5 percent. Thanks to advances in treatment and earlier detection, it’s now 20 percent with at least 25 percent of localized cancers being diagnosed. However, compared to localized breast cancer and colon cancer, which each have a five-year survival rate exceeding 90 percent, there is more progress to be made.

Sharma’s contributions to our understanding of Barrett’s esophagus have already shaped the way we diagnose and treat the disease. In fact, a physician treating a patient with Barrett’s esophagus in any part of the world is likely using some tool developed by Sharma and his team.

About 15 years ago, Sharma, along with international experts, developed a categorization system that has since been adopted worldwide. Called the Prague classification system and utilized during endoscopy, the process helps determine the extent of Barrett’s esophagus, allowing the physician to then manage accordingly. It has been shown that the increasing area occupied by Barrett’s disease is linked with a higher risk of cancer, therefore, careful grading of the extent is critical.

“In our multi-center trial, we identified endoscopy methods that provide sharper contrast and better images, highlighting the superficial vessels of the tissue. It’s like upgrading your standard television to a new HD or 4K TV.” Sharma says.

He then led a group of experts to devise a global nomenclature system for these findings, called the BING classification system.

In 2017, Sharma led an investigator-initiated study that evaluated a two-sided camera capsule. About the size of a large multivitamin, the patient swallows the capsule and pictures are taken as it moves down the esophagus. Another capsule-related effort with Massachusetts General Hospital and funded by the National Cancer Institute is studying the effectiveness of optical coherence tomography (OCT), which uses light waves to take cross-section pictures of the esophagus layers.

“An endoscopy requires IV and sedation, and it can be costly in terms of money and time. The beauty of these newer methods is they are quick and non-invasive,” Sharma says.

Another endoscopic therapy saves patients with either high-grade dysplasia or early cancer from a major surgery in which some or most of the diseased esophagus is removed via an incision in the chest or stomach. The mortality rate is very high – about 20 to 30 percent. Over the last 18 years, Sharma has been working to make this surgery less invasive by operating via an endoscope.

Prioritizing patients by risk is a crucial component of care. Most patients with Barrett’s esophagus do not progress to cancer, therefore it’s important to identify those at high risk versus low risk.  Sharma is the architect behind the first system ever to categorize Barrett’s esophagus patients into risk-level groups.

Sharma adds that PIB will change the way Barrett’s esophagus patients are managed, including eliminating unnecessary, costly procedures for patients with low scores.

“People who receive low risks can sleep better at night knowing that their risk for developing this cancer is extremely low,” Sharma says. “On the flip side, we can identify the patients with high scores and treat them more aggressively.”

The list of Sharma’s contributions to Barrett’s esophagus goes on, and there are several more collaborations in the pipeline. For him, it is about gaining traction on this precancerous condition and ultimately reducing the incidence of esophageal cancer.

“We are in a time where we are gaining so much ground on other cancer types,” Sharma says. “I want to say we have done the same for esophageal cancer.” 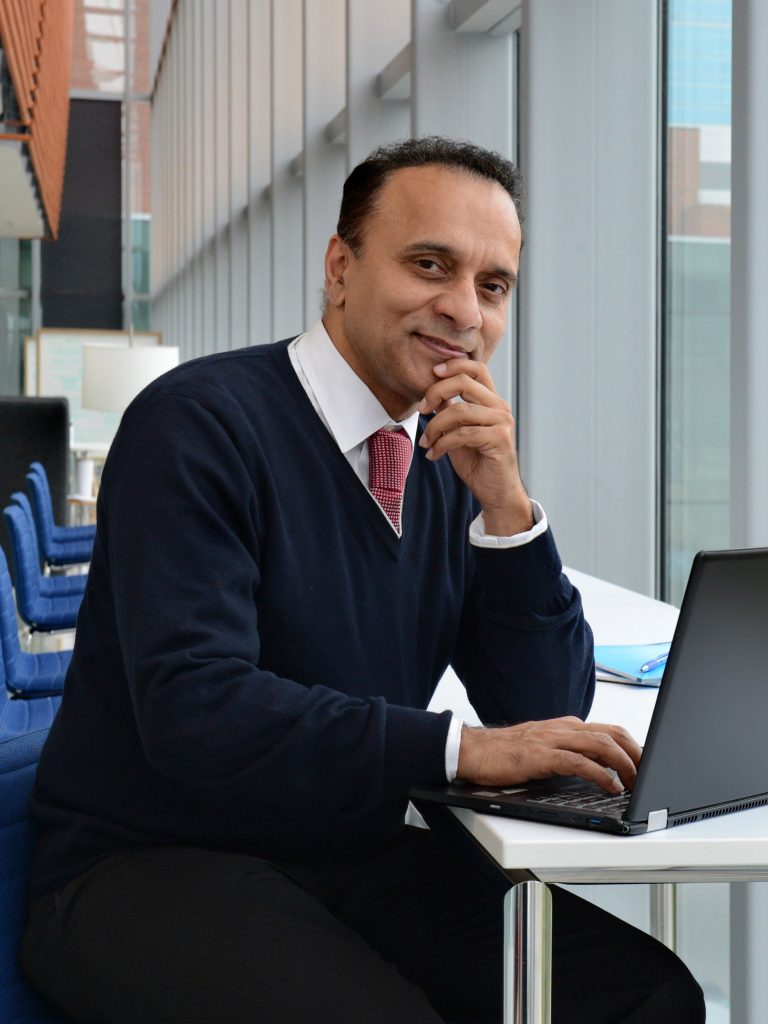