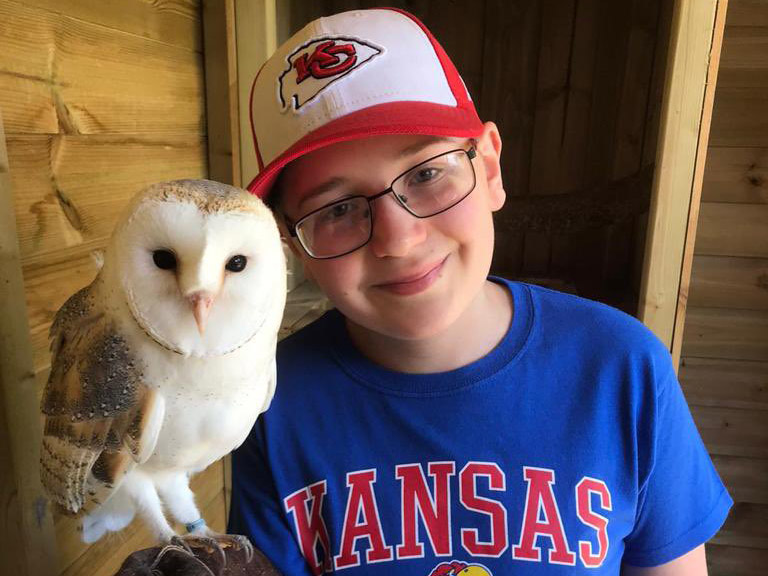 On July 27, 2017, 10-year-old Alexander Goodwin and his parents, Jeff and Maria, joined Vivian Jennings and her staff from Rainy Day Books at Unity Temple on The Plaza to celebrate the release of “Alexander’s Journey: Dum Spiro Spero” (the three words are Latin for “while I breathe, I hope”). Jeff’s book and DVD tell the story of Alexander’s journey from Lutterworth, England, to Kansas City and The University of Kansas Cancer Center. The event was a blessing for the family who, barely 18 months earlier, were unsure whether Alex would see his 10th birthday.

Alex began having leg pain in late December 2015 and, after three misdiagnoses, was diagnosed in June 2016 with Ewing sarcoma. This is a rare type of bone cancer that affects children. Fewer than 30 children in the U.K. develop Ewing sarcoma each year.

Although Alex could not walk and had severe pain – he needed morphine every two hours – doctors offered no further treatment. “They believed that any surgery they could perform, though it may have been successful, would reduce the quality of life Alex had left,” says Jeff, a Warwickshire police officer. “They told us it was unlikely he would get to his next birthday.”

That inspired Jeff to reach out on social media to get second opinions and try to find a medical center where Alex could get the care he needed. Alex soon had more than 2,000 followers and counting.

Alex first had surgery and stereotactic radiotherapy at the cancer center, followed by chemotherapy at Children’s Mercy. Next, Dr. Rosenthal replaced Alex’s cancerous thighbone with a custom-made titanium prosthesis. Motors in the implant are operated by electromagnets outside the body to “grow” the implant to match the growth on Alex’s healthy leg.

“We usually add about four mm every two or three months,” explains Dr. Rosenthal. “The outpatient procedure doesn’t hurt, can be done in the office, and takes about 15-20 minutes. And Alex can walk out of the office.”

It was an incredible journey for Alex, Jeff and Maria, who made many new friends during their stay in Kansas City. They returned to England in August 2017. A year after the surgery, Dr. Rosenthal had great news: Alex is cancer-free.

Alex did, in fact, celebrate his 10th birthday, at the Swope Park Zoo Lakeside Nature Center in Kansas City, Missouri. He has a passion for nature, science and conservation, and especially loves owls and birds of prey. And he knows what he wants. “I just want to have a normal life like everybody else when this is all over and I can walk.”

As with all treatments, individual patient results vary. It is important to discuss your treatment options with your healthcare provider.