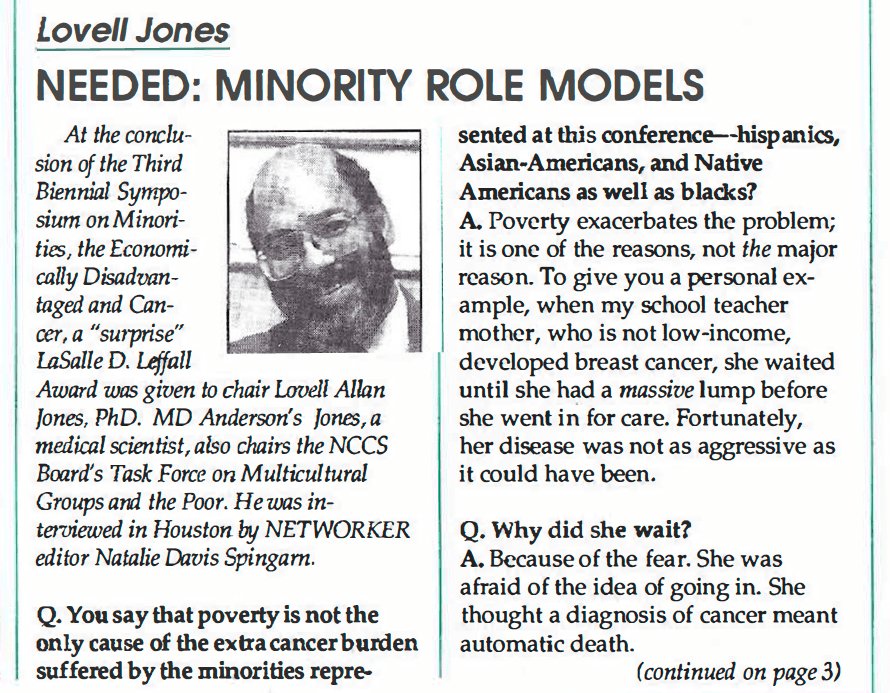 This interview with Lovell Jones was originally published in the NCCS Networker Volume 5 Issue 2, Spring 1991, which is available as a PDF download here, and is reproduced digitally below.

Jones was an early researcher of health disparities research in cancer. Jones is founder of the HDEART Consortium, adjunct professor in the Department of Health Promotion & Community Health Sciences at Texas A&M School of Public Health, and research professor at Texas A&M University Corpus Christi.

At the conclu­sion of the Third Biennial Sympo­sium on Minori­ties, the Economically Disadvan­taged and Can­cer, a “surprise” LaSalle D. Leffall Award was given to chair Lovell Allan Jones, PhD. MD Anderson’s Jones,a medical scientist, also chairs the NCCS Board’s Task Force on Multicultural Groups and the Poor. He was in­terviewed in Houston by NETWORKER editor Natalie Davis Spingarn.

Q. You say that poverty is not the only cause of the extra cancer burden suffered by the minorities represented at this conference—hispanics, Asian-Americans, and Native Americans as well as blacks?

A.Poverty exacerbates the problem; it is one of the reasons, not the major reason. To give you a personal ex­ample, when my school teacher mother, who is not low-income, developed breast cancer, she waited until she had a massive lump before she went in for care. Fortunately, her disease was not as aggressive as it could have been.

Q: Why did she wait?

A.Because of the fear. She was afraid of the idea of going in. She thought a diagnosis of cancer meant automatic death.

Q. What can be done to disabuse people of such notions?

A. We need more role models from different minority groups-people who will come forth to say, “I am just like every other person in this country who has had cancer and is surviving it. Just because I have cancer does not mean I am dying, or that I should be segregated.”

Q. You say you talked to the late Sammy Davis, Jr about this?

A. Approaches had been made to Sammy Davis, Jr about coming forth and talking about his condition. Unfortunately, he was too ill at the time to do anything about it. But one of the greatest things that took place in past years was when Yul Brynner made a commercial regard­ing the association of his smoking and lung cancer. It had a tremen­dous effect on the general public. But not on minorities—the inci­dence is still going up in terms of minority smoking.

Q. How can we in NCCS reach out most effectively to minority people?

A. Seek those individuals who are already working in minority com­munities; get them involved; then it will be easier for their communities to get involved. For instance, in Dallas they were able to get a local black woman involved in setting up a mammography program. She had been in that community for 30 years; watching her, everyone knew that the screening program was there not just for today, not just for this afternoon, but for the long haul.

Q. Some groups have tried hard, but with little success.

A. When that happens, you just haven’t hit the right person yet. It may take 18 months; it may take three or five years. But you’re going to have to be persistent in finding and having that right person become involved.

Q. What would be the practical effect of involving minority people?

A. I tell you, it would have a tremen­dous impact on the whole health care system. If you could bring forth survi­vors and make them visible, you would combat the myth that cancer is an automatic death sentence. Then you could start to pull people into screening programs. They would learn that if they go in for care earlier they can survive.

Clinical Cancer Advances 2017: Annual Report on Progress Against Cancer From the American Society of Clinical Oncology