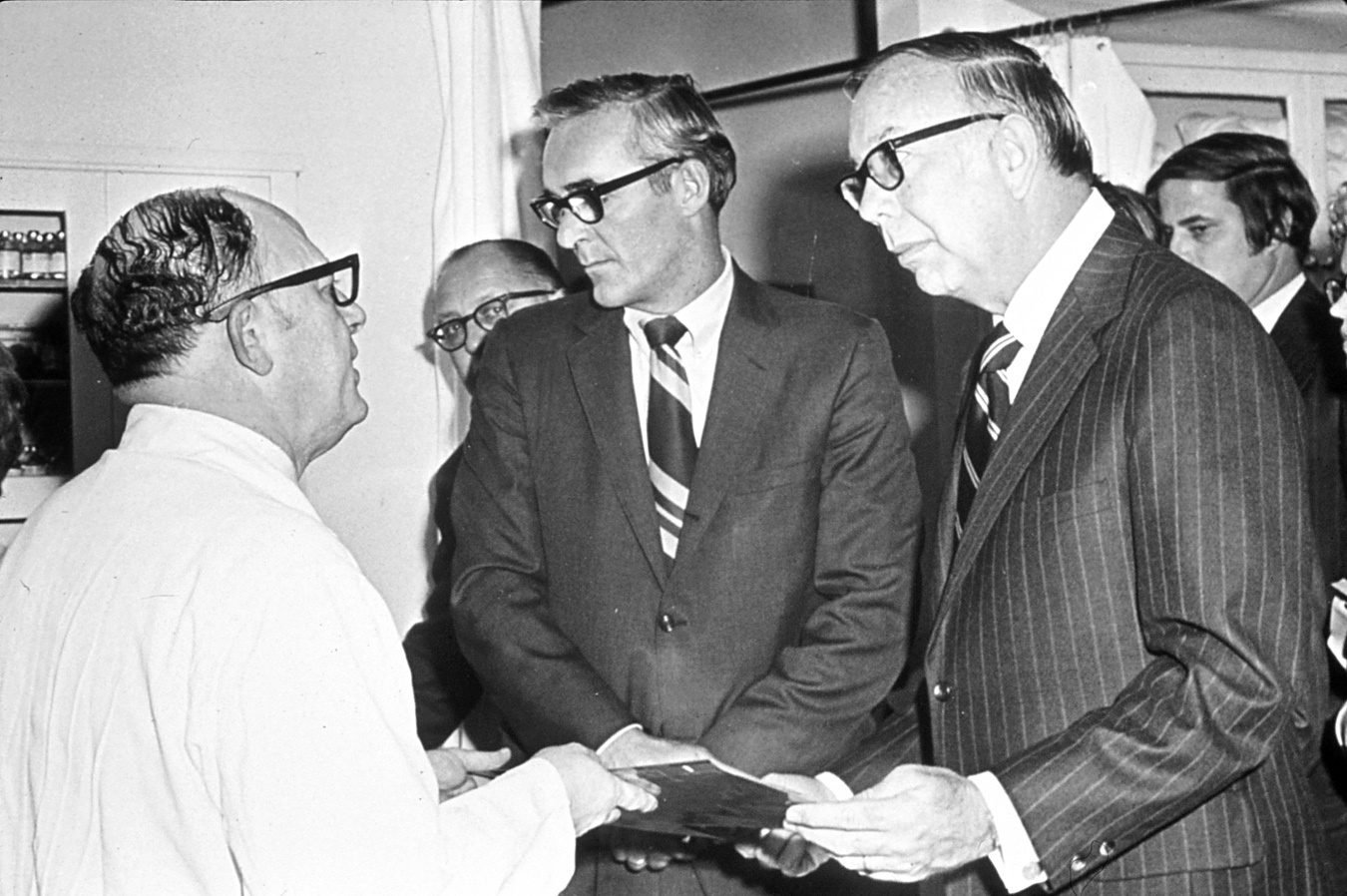 Roswell Park’s role in the National Cancer Act of 1971

This year marks the 50th anniversary of the United States Congress passing the National Cancer Act of 1971, the landmark legislation that put a national spotlight on what President Richard Nixon described as “the war on cancer,” which was then — and remains — the second-highest cause of death in the United States.

The National Cancer Act of 1971, which established the National Cancer Institute (NCI) in its current form, established federal and non-federal cancer prevention, treatment and research programs, launching what would become a national cancer centers program overseen by the NCI. The anniversary of the NCA is a special one at Roswell Park Comprehensive Cancer Center, not only because ours was one of three centers considered models to be emulated nationwide, but because Roswell Park leaders at the time played important roles lobbying for its passage, so much so that the National Cancer Act was put into its final form right here in Buffalo.

“There were competing bills in both the House of Representatives and the Senate, and the battle wasn’t over whether something should be done, but rather what the structure should look like,” says Cynthia Schwartz, Executive Director of Special Projects & Community Outreach Director of the Roswell Park Alliance Foundation Ambassador Program.

Pushing the House of Representatives bill was Rep. Thaddeus J. Dulski of Buffalo, serving his seventh term in congress, an ally of Roswell Park and a personal friend of then-Roswell Park Director Dr. Gerald P. Murphy. “Congressman Dulski was a champion of Roswell Park, which at the time was still a part of the New York State Department of Health, so he was accustomed to fighting for funding for the cancer center,” says Schwartz. “I think he just admired what was going on here and knew that it was something unique and different. Fifty years ago, there were only a handful of cancer centers, and most were placed within university medical programs, so there weren’t many places doing what Roswell Park was.”

After several subcommittee hearings in Washington during the spring and summer of 1971 — which featured testimony from Dr. Murphy — Rep. Dulski wanted the final congressional hearing to take place at an actual cancer center, where the elected officials running the subcommittee could experience what it was like to be in a comprehensive cancer center environment. A meeting was set for October 1971 on Roswell Park’s medical campus.

At the hearing, Roswell Park leadership gave testimony on the importance of this bill. Aiding the testimony were physician interns from Germany and France who shared what treating cancer was like in their home countries and what drew them to Roswell Park to train in the setting of a comprehensive cancer center.

Although it was a shared sentiment that a national plan to attack cancer was necessary, and by the fall of 1971, the House legislation was largely in place, the hearing at Roswell Park wasn’t just a ceremonial one. How the federal funding would be distributed still needed to be written.

When asked his thoughts on how the funding and research for cancer centers could be improved, the testimony of Roswell Park’s Associate Director, Edwin Mirand, PhD, gave Congress a solution:

“I think a mechanism, which could be established, which would be a large institutional grant in specific categories, could be given to any comprehensive cancer center through a means in which, in some way, a large lump sum could be given to an institute on some formula basis, particularly the comprehensive cancer institutes involved in research, clinical delivery and education,” Dr. Mirand wrote.

“Members of the subcommittee picked that up, and within a week, a version of Dr. Mirand’s language was included in the legislation and used as an appropriate way to allocate funding and became what we now call the ‘Core Grant’ process, that funds NCI designated cancer centers,” says Schwartz.

With the final language now in place, Congress passed the updated National Cancer Act on December 23, 1971. Dr. Murphy was invited to attend the signing and was appointed to President Nixon’s newly established National Cancer Advisory Board. The following spring, the board drew the guidelines that centers would have to meet to be considered a comprehensive cancer center and eligible for funding through the NCI. MD Anderson in Houston, Sloan Kettering in New York City and Roswell Park served as the models for what a comprehensive center should look like and what guidelines centers would have to meet every five years to receive the Core Grant funding from the NCI.

The following year, 12 more centers were approved for Core Grant funding, establishing the first NCI-designated comprehensive cancer center network, allowing multidisciplinary teams to share their knowledge of novel treatments, new ideas and inventive therapies with their fellow cancer experts locally and globally. The NCI-designated comprehensive cancer center model has been proven to provide better long-term survival rates for patients, compared to those treated in other settings.

“It’s a legacy we are enormously proud of at Roswell Park, and one the whole nation now benefits from,” says Schwartz.

The National Cancer Act at 50: A Memorial Sloan Kettering Timeline