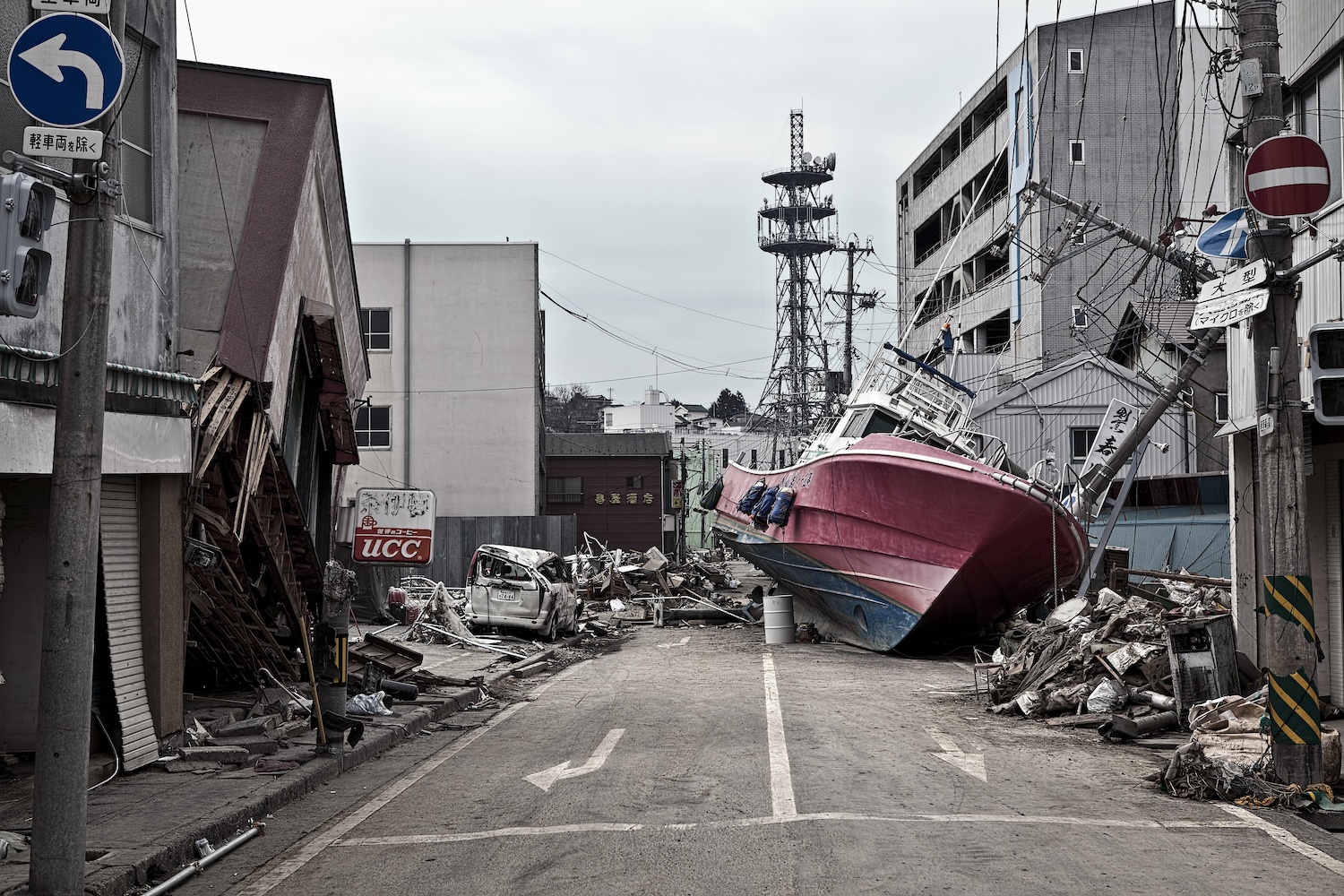 On the early morning of March 11, 2011, I was on an elliptical trainer in the health club of my Paris hotel watching CNN when I saw live coverage of a powerful earthquake in Japan.

A slow-moving wave about 1 m high came sweeping up a river, overspilled the embankments and inundated the land. People were running to climb a highway overpass whilst cars swept by like toys.

The 9.0 Richter scale earthquake about 70 km off the northern Tohoku coast of Honshu, the main Japan island, triggered a tsunami with 40 m tall waves—a 12-story building—reaching 9 km inland. My concern at the time was for my colleagues at Tsukuba University about 300 km south of Sendai.

Although I knew of the Fukushima Daiichi nuclear facility on the coast near the epicentre, I was not terribly worried.

Japanese nuclear facilities, like those in the U.S., have redundant electricity power sources to keep the pumps, which circulate water to cool the nuclear core running: (1) electricity generated by the facility; (2) electricity from the regional electrical grid; and (3) auxiliary diesel engine generators. It was difficult to imagine simultaneous failure of all 3 electrical sources but this is what happened.

A few hours later, much to my amazement, I saw live TV footage of hydrogen explosions unroofing several of the containment buildings at the Fukushima Daiichi nuclear power facility.

The reactor auto-shutdowns stopped internal electricity generation, widespread damage knocked out the Tohoku regional electricity grid and, as a coup de grâce, a 15 m tsunami wave overwhelmed the protective sea wall and flooded the diesel generators, wiping out a last chance to cool the reactors. I had a flashback to my experience at the Chernobyl nuclear power facility, 25 years earlier.

Within hours, I received a call from a Japanese colleague indicating the governments requested I come to Japan immediately. I booked a ticket, but first, I scoured several Paris pharmacies for iodine tablets. Not surprisingly, the French public, having learned of the accident, wiped out any supply. I also tried French colleagues who might have access to government stockpiles. No luck.

In a last ditch effort I contacted an Israeli chemist I knew in New York who sold bulk chemicals. Luck! He had access to 2 tons of iodine in Kazakhstan. I told him to ship it to me at the Imperial Hotel (toho) in Tokyo. A big surprise for the concierge, no doubt.

Much has been written about the Fukushima earthquake and tsunami, so I refer only to some personal details and summary data here. Soon after arriving, my colleagues and I drove to J camp, a staging facility a few kilometers south of the nuclear facility to meet with physicians responsible for evacuations and worker and mitigation/recovery personnel protection.

Ultimately, it was decided to evacuate almost one-half million people. Decisions like this are not easy. Many people living in this part of Japan are old, with chronic diseases like diabetes and hypertension. Evacuation displaces them from medical and family support. As I will discuss, more people died from these displacements then from adverse health effects of radiation. The psychological and economic tolls were enormous.

Our initial attention focused on efforts to reduce radiation releases from the power facility, protect the mitigation/recovery workers and make evacuation decisions. Maintaining credibility with the public is hugely important in large-scale nuclear accidents, and will be especially important in the context of nuclear terrorism, should this occur.

My colleagues and I met on several occasions with an Emergency Task Force of the Japanese government. The challenge we faced was, in my experiences in the Soviet Union, Brazil, and elsewhere where there have been large-scale nuclear accidents, was similar.

Suddenly, the government head who feels he/she must remain in-charge publicly is faced with decision-making on issues where he/she lacks a fundamental understanding. Experts, or so-called experts, race in and out, often offering contradictory advice potentially affecting millions of people.

For example, in Tokyo, 250 kilometers from Fukushima Daiichi, bottled water immediately disappeared from supermarket shelves. Shoppers scooped up Geiger counters and were seen checking packaged rice for radiation contamination. As I pointed out on Japan TV one would need to eat ½ kg per day for 1 year to receive a dangerous radiation dose.

We were lucky with several aspects of the accident. For example, because the facility was sited on the coast, with easterly blowing winds prevailing, about 90% of the radioactive plume was deposited in the Pacific Ocean. Although this sounds terrible the oceans normally contain large amounts of radiation.

And although radioactive water from the facility leaked into the ocean, the amount was small compared with natural radiation levels (mostly from 40-potassium), radioactive materials dumped into the oceans by the nuclear powers (predominately the U.S. and Soviet Union) during the Cold War and from atmospheric testing of nuclear weapons. One positive spin-off was I was able to get sushi at the now-defunct Tsukiji seafood market cheaply.

Another fit of good luck was the ability to rapidly quarantine milk and milk products from the Tohoku region, something we could not do after the Chernobyl nuclear power facility accident. Children ingesting milk from cows eating grass contaminated with radio-iodine was a huge problem after the Chernobyl accident.

This, and the high normal iodine consumption of people in northern Japan and rapid, efficient distribution of iodine tablets markedly reduced the risk of children developing thyroid cancer. There are no convincing data of an increased thyroid cancer risk from this accident, in contrast to the several thousand cases of thyroid cancer in children attributed to radio-iodine released by the Chernobyl accident.

The estimated death toll from the Great Eastern Japan Earthquake (the official Japan government name) is 16,000-18,000, with more than 2,500 persons still missing. Most victims drowned at home or were swept to sea. Importantly, there are no deaths attributed to exposure to ionizing radiations despite this being the second largest nuclear accident in history.

I and others have offered estimates of how excess cancers might be caused by radiations released from the Fukushima Daiichi accident over 80 years, about 1,500. Why is this estimate so low?

To understand, consider estimated lifetime excess doses to mitigation/recovery personnel, evacuated persons and to persons living in contaminated lands are 50, 30 and 10 milliSieverts (mSv).

What does this mean? The average annual background dose to Americans is about 3 mSv so the excess radiation dose someone living in a city is equivalent to living about 3 years in the U.S., worse were Trump still president.

There are also important caveats to these estimates. First, background cancers in Japan over this interval will be about 20 million making 1,500 less than 0.01%. Second, this estimate is based on the linear-no-threshold relationship between radiation exposure and cancer, a relationship some scientists claim should not be applied to estimating population risk.

Third, our lifetime cancer risk is about 40% such that an increase of this magnitude would be undetectable, especially if cigarette smoking in Japan were to decrease over the next 70 years as expected.

Lastly, to put this excess risk in perspective, a typical abdominal positron emission tomogram/computer tomography (PET/CT) scan is about 25 mSv equivalent to the cancer risk to an evacuee. The risk of death from 1 mSv of radiation is equivalent to smoking 14 cigarettes (total, not per day) or from eating 25 cups of peanut butter (aflatoxin). To be fair, some claim eating peanut butter reduces risks of oesophageal and breast cancer, but what about deaths from obesity and cardio-vascular disease?

I must comment on the resilience and communal spirit of the Japanese. I visited centres for displaced persons on several occasions to bring small gifts. Often, I met elderly persons who had been living on a 2×2 m mat with several hundred other people in a converted school gymnasium. They were invariably good-spirited, inviting me in for tea and often refusing, initially, to accept small gifts of food.

In Tokyo, we lived for several months with no elevators in high rise buildings and no air conditioning in the summer, because of energy restrictions. Short sleeve shirts without a tie became a badge of solidarity, quite a change from the typical Japan salaryman.

Every Christmas, my Tokyo colleagues would buy pastries made in Fukushima to distribute to displaced persons and, for many years, I was able to have a carton of fruits and vegetables shipped to me in California from Fukushima prefecture. This is called Tohoku damashi (Tohoku spirit)

In the months following the accident, I met with many pregnant women concerned with possible birth defects. I assured them there was no risk, telling them we found no convincing evidence of increased birth defects after the Chernobyl accident despite many unsupported claims to the contrary.

On several occasions I met with recovery workers allowed to be exposed to up to 50 mSv before having to quit their jobs. They were concerned what this meant. During these meetings many of them smoked 1-2 packs of cigarettes. I assured them cigarette smoking was far more dangerous than their excess radiation exposure.

I do not mean to under-estimate the consequences of Fukushima. The Tohoku region will never be fully rehabilitated. Many residents, especially the old, have died or moved elsewhere, and will never return. The cost of the accident, direct and to Japan’s economy, is estimated at $200-300 billion USD. Clean-up of the Fukushima Daiichi nuclear power facility will take at least another 30 years and will require technologies not yet invented.

Do the tragedies of Chernobyl and Fukushima mean we need to give up on nuclear energy? I think not.

First, there is no way to meet global energy needs and simultaneously reduce carbon emissions without nuclear energy. Texans will understand what I mean.

Consider this: When Japan temporarily shuttered its 40 nuclear power facilities, its carbon emissions from substituting oil increased dramatically. Another example: To produce equivalent amounts of electricity, coal-based power facilities release 100 times more radiation into the environment compared with a nuclear power facility—coal contains many radionuclides such as thorium, uranium and radium.

One could write much more about lessons learned from the Great Eastern Japan Earthquake. I was honoured to be able to help in a small way. I thank my Japanese colleagues who provided support and to the people of Japan for inspiring me.

Stairway of Surprise: A Biography of Kay and Gordon Zubrod

Chernobyl: a 35 year follow up on long-term health effects