Alfred G. Knudson Jr., the creator of the “two-hit hypothesis,” and a director of the Institute for Cancer Research at Fox Chase Cancer Center, died July 10. He was 93.

The two-hit hypothesis postulates that cancer is produced by accumulated mutations in a cell’s DNA. The hypothesis explains the relationship between the hereditary and non-hereditary forms of cancer, and predicted the existence of tumor-suppressor genes that can suppress cancer cell growth.

Through statistical models and research in pediatric retinoblastoma, Knudson differentiated hereditary and non-hereditary forms of cancer. He argued that cancer did not develop until both copies of a gene were damaged or mutated. Children who developed hereditary cancer inherited one mutated gene. That constituted the first hit. These children would develop cancer if their remaining normal gene was damaged. 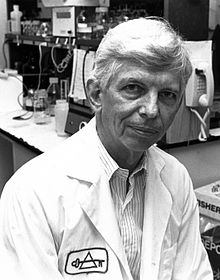