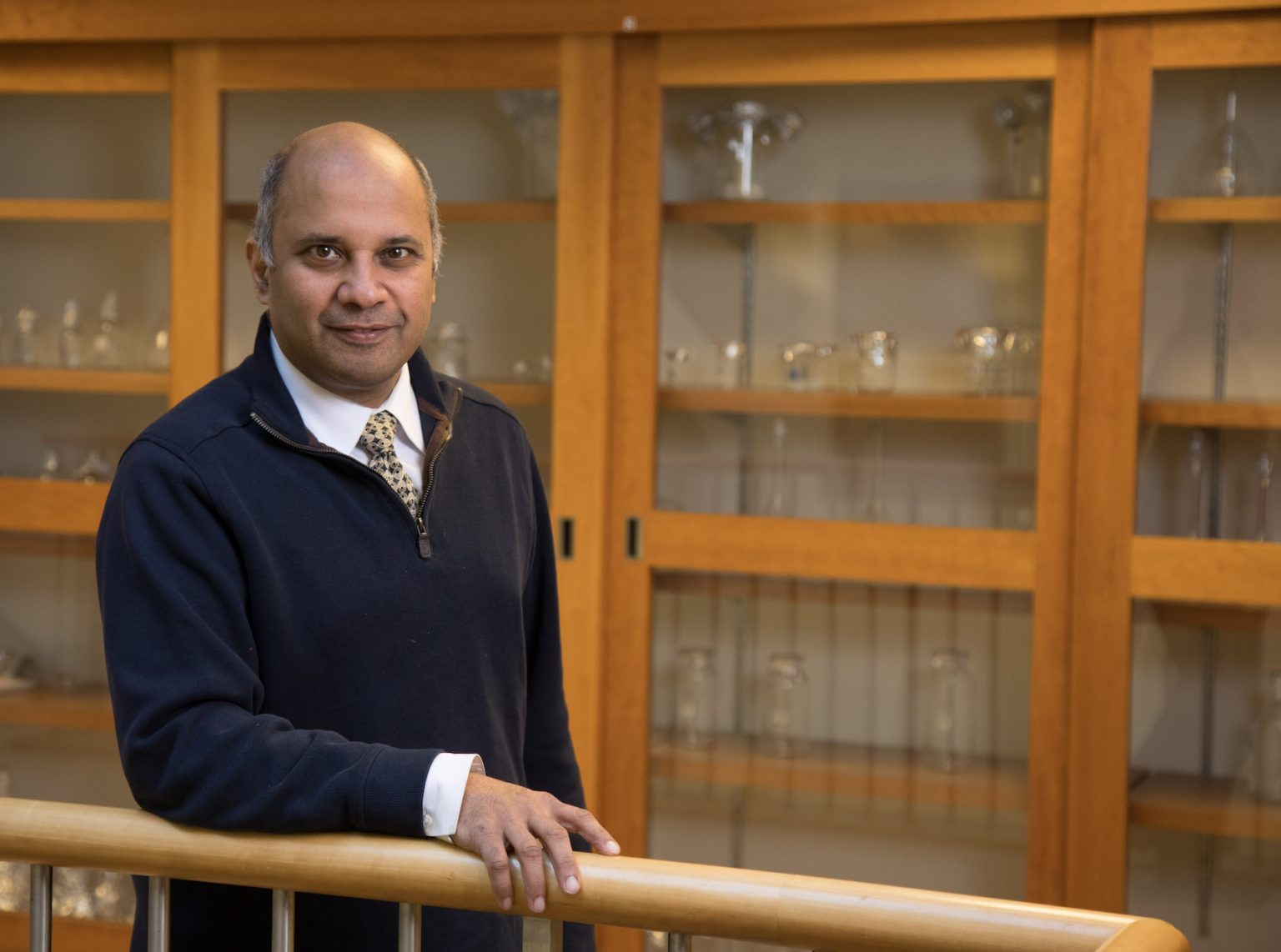 Many of today’s successful treatments for cancer are based on results of past clinical trials. Because of progress made through clinical trials, people treated for cancer are living longer today, giving patients like Marcia Bird with recurrent endometrial cancer the opportunity to thrive. Shridar Ganesan, MD, PhD, chief of molecular oncology, associate director for translational research, and Omar Boraie Chair in Genomic Science and a professor of medicine and pharmacology at Rutgers Robert Wood Johnson Medical School, Janice M. Mehnert, MD, former director of the Phase I/Investigational Therapeutics Program at Rutgers Cancer Institute of New Jersey along with members of the Gynecologic Oncology team at Rutgers Cancer Institute worked together to find the right clinical trial for Bird. Her story, which was originally published in Rutgers Cancer Institute’s Cancer Connection Magazine in summer of 2016, shows how scientists are always learning more about how to treat patients and milestones in cancer research are being always being reached.

When researchers at Rutgers Cancer Institute of New Jersey learned of Marcia Bird’s response to investigational treatment for a recurrence of endometrial cancer, they were intrigued. “We saw the response, then asked the question – and found out more than what we were looking for,” recalls Janice M. Mehnert, MD, director of the Phase I/Investigational Therapeutics Program at Rutgers Cancer Institute of New Jersey. What they learned was that the presence of a particular mutated enzyme may help identify a subset of cancers that are more responsive to new forms of cancer treatment known as immunotherapy.

In 2010 when Marcia Bird experienced some slight, irregular gynecologic issues, she thought it may be related to menopause—after all, she had just turned 50. Busy with life as an instructor and administrator for the Cosmetology Program at Raritan Valley Community College and keeping up with friends, family and her tennis game, Bird didn’t think much of it at the time. But by the summer of 2011 she was met with a diagnosis of stage IB endometrial cancer, a disease that affects the inner lining of the uterus and is the fourth most commonly diagnosed cancer among women in the United States, according to the National Cancer Institute. Stage IB means the cancer has spread to the muscle layer of the uterus. Treatment runs the gamut, and the disease is largely curable. After having a hysterectomy, chemotherapy and radiation, followed by clear scans through 2013, Bird thought the disease was behind her. She even enrolled in a support program for cancer survivors. It was a devastating blow to learn the cancer had metastasized to her neck and pelvic lymph nodes in the spring of 2014, and she found herself again trying to determine the appropriate therapy and where.

After doing extensive research and visiting various cancer centers and hospitals in New Jersey, New York and New England, she decided to remain in the region, close to her Somerset County home. “I only had three options,” recalls Bird.  “I could undergo the same chemotherapy treatment, try different chemotherapy or look for a clinical trial.”  She describes her initial chemotherapy regimen as “very aggressive,” and due to hair loss and other side effects, “I knew I didn’t want to go through that again. I had to believe there were other opportunities.”

Understanding that Bird did not want to endure additional chemotherapy, her oncologist strongly recommended that she have access to a clinical trial with the potential for a different form of treatment – she was referred to Rutgers Cancer Institute of New Jersey.  “I told the doctors ‘I don’t want to look sick, and I don’t want to feel sick anymore,” Bird explains. Because of the comprehensive nature of Rutgers Cancer Institute, the Gynecologic Cancer Program and the Phase I/Investigational Therapeutics Program worked together to find the right clinical trial for Bird.

Immunotherapies, which manipulate parts of the immune system to attack cancer, represent a major advancement in cancer therapeutics which has now become an important cornerstone in the treatment plan of many patients.  Therapies which target the programmed cell death protein one (PD-1), which is found on the surface of T cells, have been approved by the U.S. Food and Drug Administration for several tumor types, including melanoma and lung cancer. The Phase I team at Rutgers Cancer Institute was among the first to test the PD-1 inhibitor pembrolizumab in multiple rare tumor types as part of a clinical trial.

New studies, including those at Rutgers Cancer Institute, are examining the impact of pembrolizumab in other tumors. Investigators also are taking a look at what happens if other drugs are added. “Is combination therapy the way to go? Possibly, but it is often associated with greater toxicities and financial cost.  If you can find out up front which patients will respond to single-agent therapy, thus sparing them the need to have a second medication added to their treatment plans, that would be clinically meaningful,” says Dr. Mehnert, who is also an associate professor of medicine at Rutgers Robert Wood Johnson Medical School. But in order to do that, she says, biomarkers predicting response to immunotherapy need to be identified.

Research shows that patients whose tumors demonstrate higher PD-L1 expression may have a higher chance of responding to immune checkpoint therapies. With that, high expression of PD-L1 is being explored as a potential predictor of response to treatment, but Mehnert notes it is not that simple. “PD-L1 is tough to measure – it’s a challenging biomarker with no standardized method of assessment in existence. The research community agrees that high PD-L1 expression likely enriches the chances of response to therapy, but there’s more to it.”  Because Bird’s tumors were found to have a high level of PD-L1 expression, she was eligible for one of the clinical trials examining pembrolizumab for patients with endometrial cancer. She was enrolled and began taking the study drug once every two weeks through an infusion that lasts approximately one hour.

Bird had been trying to keep up with her regular tennis game, even during treatment, having been playing the sport since college. “The ladies in the group that I play in were wonderful in trying to get me out there and keep me going, even if it was just for a short time,” she says.  But the swelling in her ankles and lower extremities made it challenging to keep up. Therefore, she was thrilled when the swelling subsided after a few weeks on treatment, as it meant a return to her regular neighborhood game and some tournament play and more long walks with husband Eric and their dog Misty. A partial response was noted on CT scans performed after eight weeks of therapy, which was “very impressive” according to Mehnert, “It was the quality of the response that was unique in that it was rapid and durable,” she says. “They told me the tumors had shrunk by about 40 percent after that first scan. I only experienced a fever and slight rash over the course of treatment, and no hair loss,” adds Bird.  “We’re managing the patient’s disease like a chronic illness, like diabetes, for instance.  And that means an improved quality of life,” reflects Mehnert.  Bird has been on the clinical trial since October 2014, and even though she received “clear scans” in February 2015, she will likely continue with the treatment until the summer of 2016 as mandated by the treatment protocol.

Especially since pembrolizumab has not been widely explored in endometrial cancer, there is no baseline for comparison.  It was what Mehnert calls “that rapid and durable response” that made her and colleagues take pause.  Starting to learn more about the mechanisms behind immunotherapy drugs through each clinical trial conducted at Rutgers Cancer Institute, the Phase I team wanted to know what was driving that response. They enlisted the help of the Institute’s Precision Medicine Program, and through another clinical trial examining difficult to treat cancers through genomic, or DNA, analysis, they aimed to add to their arsenal of knowledge. Two tissue samples of Bird’s tumor were sent out for sequencing – a process that looks for more than 200 known mutations or alterations. When the results came back, it was an ‘aha moment.’

Through the genomic analysis clinical trial, investigators have seen an average of four to five alterations for each tumor.  There were more than 30 mutations in each of Bird’s samples. If these results were being used to determine treatment, that would mean potentially 30 more opportunities to match the right therapy to the right target or alteration. Out of all of the mutations, Shridar Ganesan, MD, PhD, director of translational science at Rutgers Cancer Institute and lead investigator of the genomic analysis clinical trial, zeroed in on one called polymerase epsilon, or POLE.

“POLE is part of the DNA replication machinery in cells and has a critical function of ‘proofreading’ newly synthesized DNA – sort of like spell check on a computer, to prevent mistakes that can occur during the copying of DNA,” explains Mehnert. “During DNA replication which occurs when cell divide, billions of DNA bases must be copied accurately. Occasionally mistakes, like unintentional ‘typos’ can occur. The proofreading part of POLE will detect such mistakes and fix them.  If mutations occur that disable the proofreading function of POLE, numerous mistakes can occur during DNA replication, leading to increased risk of cancer.”

“POLE mutations are seen in approximately 10 percent of endometrial cancers and are associated with a high burden of DNA mutations and increased expression of PD-1 and PD-L1. The high mutation burden associated with POLE mutation may stimulate the immune system, thus rendering these cancers vulnerable to immunotherapy. That knowledge coupled with what we are seeing in Mrs. Bird’s case suggests the presence of POLE mutations may identify a subset of cancers that can be targeted with checkpoint therapy like pembrolizumab,” notes Dr. Ganesan.

“Endometrial cancer is usually curable, however when it comes back as in Mrs. Bird’s case, it is more difficult to keep under control. Given that she had multiple sites of recurrence, standard therapies are not encouraging for cure. The response to immunotherapy seen in Mrs. Bird’s tumor is unexpectedly good. Given that we were able to figure out what was in her tumor that made it so sensitive to immunotherapy is a step forward for other women whose tumors harbor the POLE mutation,” notes Lorna Rodriguez, MD, PhD, Director of the Precision Medicine Program at Rutgers Cancer Institute and a professor of obstetrics, gynecology and reproductive sciences at Rutgers Robert Wood Johnson Medical School.

“Such results prompt us to ask more questions and probe even further. Marcia Bird’s case in particular shows how the Precision Medicine and Phase I Programs interface and demonstrates the fertile crosstalk between clinic and laboratory here at Rutgers Cancer Institute.  We are constantly communicating with each other, a process that allows us to quickly bring discoveries to light,” adds Mehnert.

Having experienced the death of her father from a form of brain cancer in the mid-1970s, Bird recalls there weren’t the types of treatments, let alone clinical trials, at that time that there are today.  With that, she feels grateful a clinical trial opportunity was afforded to her and so close to home. “I am amazed that my case may be able to help others and take scientific research in this area to the next level,” she says. Mehnert agrees, “We are in a period where all clinical trials are not created equal and groundbreaking results with immunotherapy are being seen. It used to be about ‘laboratory bench to patient bedside,’ but the results now being seen are prompting a shift in the work being conducted by the Phase I team, where we now go from ‘bench to bedside…and back.’ Times are definitely changing.”

Anthony Murgo, of the FDA Office of Hematology and Oncology Products