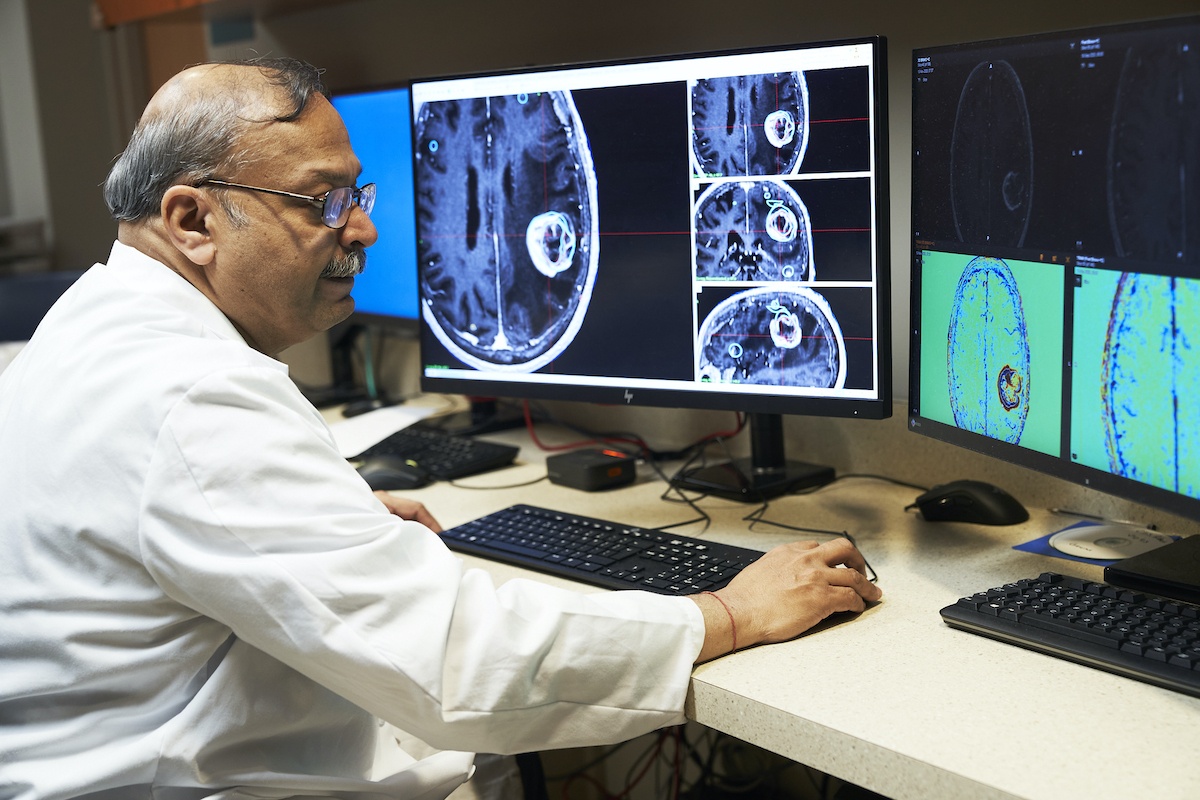 Twenty-three years ago, Roswell Park Comprehensive Cancer Center launched its Gamma Knife program, offering what was then an emerging technology that uses minimally invasive, precisely targeted radiation therapy for patients with brain tumors and other disorders. A generous $3.5 million donation from the Roswell Park Alliance Foundation made the program possible.

Roswell Park is the only Western New York institution equipped with a Gamma Knife. Since the program’s launch in 1998, Roswell Park neurosurgeons and radiation oncologists have performed the advanced radiosurgery on nearly 9,000 patients from across the country and around the globe. In 2020, Roswell Park treated the highest number of patients in the U.S. with a single Gamma Knife device (725).

Roswell Park recruited Dheerendra Prasad, MD, MCh, FACRO, in 2005 specifically to direct the radiosurgery program. Dr. Prasad is among the top three most experienced Gamma Knife experts in the world, having performed more than 12,000 radiosurgery procedures himself. He has traveled to 68 centers worldwide to train other surgeons in Gamma Knife techniques, sharing his expertise and best practices with them.

As a result, Roswell Park has emerged as an international leader and mentor for use of this targeted, highly effective treatment, which reduces a patient’s radiation therapy treatments from three weeks to just three hours in one day.

What is Gamma Knife radiosurgery?

Gamma Knife radiosurgery uses high-dose, focused radiation instead of a scalpel to treat conditions in the brain such as malignant and benign brain tumors. The treatment is delivered with extreme precision, painlessly and silently, without incisions. Radiosurgery is done as an outpatient procedure, usually in a single day, and does not require general anesthesia. All of Roswell Park’s board-certified neurosurgeons are trained to perform Gamma Knife radiosurgery and traditional cranial neurosurgery.

For patients with certain types of brain tumors or brain metastases, this high-precision radiation therapy serves as an effective alternative to neurosurgery or conventional radiation therapy. In some cases, Gamma Knife makes it possible to treat deeply embedded tumors that cannot be reached with conventional surgery.

The Gamma Knife also is used to treat noncancerous brain conditions, including trigeminal neuralgia, which is a nerve disorder that causes a stabbing or electric-shock-like pain on one side of the forehead, cheek or jaw; a tangle of abnormal connections between the veins and arteries known as arteriovenous malformations; and essential tremors, a movement disorder which appears due to imbalance in central neural circuits that control movement.

Gamma Knife results in minimal side effects and preserves patients’ normal brain function far better than other radiotherapy approaches. For example, with traditional whole brain radiotherapy, 100% of the brain receives radiation, leading to side effects that can impair cognitive function. Other radiotherapy technologies deliver radiation to 20 to 30% of the brain. With Gamma Knife however, less than 0.5% of the brain receives radiation, significantly preserving healthy brain tissue, brain function and future quality of life.

“Gamma Knife translates to improved comfort and safety for patients and, in many cases, spares them from cognition-related side effects for years to come,” says Dr. Prasad, who also is Medical Director of Radiation Medicine.

In 2016, Roswell Park became the first American cancer center and the second institution in the U.S. to implement the Leksell Gamma Knife Icon, expanding the range of conditions that can be treated through Gamma Knife radiosurgery.

Roswell Park uses the Leksell Gamma Knife Icon radiosurgery system to treat mostly benign tumors and malignant metastatic tumors that spread to the brain from other parts of the body.

Roswell Park also makes its Gamma Knife technology and expertise available to physician partners in the Western New York region, who come to our center to treat roughly 50 patients every year.

How does Gamma Knife radiosurgery work?

One of the main features of the Leksell Gamma Knife Icon is that it incorporates real-time cone-beam CT (computed tomography) imaging right into the device, resulting in improved quality control and precision in treatment delivery. As a result, surgeons can destroy a brain tumor by zapping it with 192 intersecting gamma ray beams.

The system also gives patients who will require multiple radiosurgery treatments within a short time — including those with multiple brain lesions or some breast, endometrial and lung cancers that have spread or metastasized to the brain — the option of “frameless” radiosurgery to increase their comfort, according to Dr. Prasad, who says the procedure “makes radiosurgery a needle-free procedure. “

“Frameless radiosurgery eliminates the need for a stereotactic frame, by using a thermoplastic mask molded to the patients face. This translates to improved comfort and safety for patients and expands the availability of the radiosurgery option for patients with multiple tumors or larger tumors, thus sparing them cognition-related side effects for years to come.”

Dr. Prasad adds that with Gamma Knife Icontm, the ability to incorporate real-time imaging opens up the treatment to a broader range of patients, including those with tumors close to critical structures such as the optic nerve, or with surgical cavities and larger tumors who otherwise would need whole brain radiation.

Who can get Gamma Knife radiosurgery?

Gamma Knife radiosurgery is a potential treatment option for patients with the following conditions:

Reflecting on the impact of the Gamma Knife program

On the 20th anniversary of Gamma Knife at Roswell Park, Dr. Prasad said that the center had “demonstrated incredible leadership in building this very important program over the years, from Dr. David Hohn’s vision in guiding it through its early years to Dr. Candace Johnson’s enthusiastic support,” referencing Roswell Park’s former and current president and CEOs.

He also praised past Roswell Park presidents and Michael Kuettel, MD, PhD, MBA, Professor and the Barbara C. and George H. Hyde Chair in Radiation Medicine, for focusing “on how to best implement this technology so it could improve the care of patients throughout the region and even across the country; what we’ve achieved through their ambassadorship is considerable.”

And he noted what he considers the most significant impact of the Gamma Knife program at Roswell Park: the focus on brain protection.

“We have helped to show that this technology can be safely and effectively used to treat patients with multiple brain tumors, sparing them the long-term effects of whole-brain radiotherapy. But what I’m most excited about is that because radiosurgery has advanced alongside exciting developments in other areas of treatment, particularly immunotherapy, many of our patients are thriving with good quality of life.”

Clinical Cancer Advances 2012: Annual Report on Progress Against Cancer From the American Society of Clinical Oncology

Waun Ki Hong, eminent role model, was always years ahead of the field