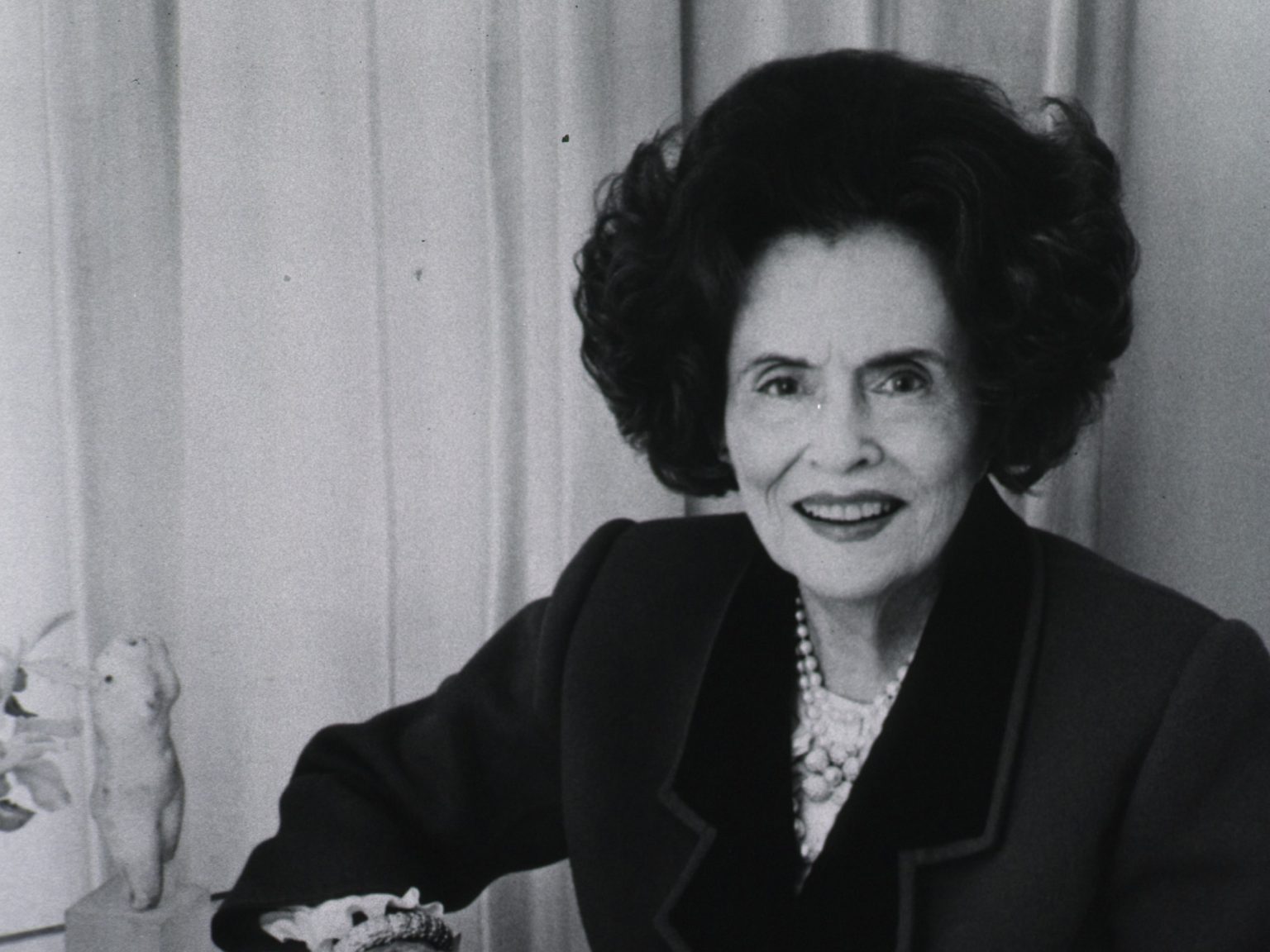 “Everybody was standing at attention and the Senator was getting ready and prepped for it. I had never seen anything like it before.

“You would have thought the Queen of England was coming.”

Besides being regal in manner, Mary Woodard Lasker, who died last week at 93, undertook benevolent projects on a scale fit for royalty:

Mrs. Lasker’s other cause, gardening, was funded on an equally grand scale.

In Washington, she paid for 10,000 azaleas planted along Pennsylvania Avenue, 900 Japanese cherry trees around the tidal basin and over 1 million daffodils planted at Rock Creek Park and on the Virginia side of the Potomac. In New York, her gardening projects included a 20-block stretch of Park Avenue, Central Park and the grounds of the United Nations. The latter was donated in memory of Albert Lasker, who died of cancer in 1952.

On some years, Mrs. Lasker’s purchases of tulip bulbs in Holland were second only to those of the Queen of England.

Mrs. Lasker was a driven crusader who followed scientific journals and science policy publications, showed up at markup sessions of congressional committees, made appointments to see NCI officials, got involved in hiring and firing decisions at ACS and, on occasion, placed 2 a.m. telephone calls to her associates.

“She had nothing to gain personally. It wasn’t a selfish thing at all,” said Paul Rogers, who was the subject of Mrs. Lasker’s lobbying as former chairman of the House health subcommittee. “That was the source of her credibility.

“The American people lost their best health advocate in Washington when Mary died,” Rogers said to The Cancer Letter.

Mrs. Lasker realized that scientists and the government needed to work together and that prodding was required to force them into a partnership. Initially, many of the physicians who belonged to the precursor of ACS, the American Society for the Control of Cancer, were opposed to committing the society’s funds to research as well as to lobbying the government to underwrite biomedical research.

However, with the Laskers’ involvement, the society’s budget climbed from $356,000 in 1943 to $10 million three years later. Opposition dwindled. Later, the Laskers’ lobbying contributed to an exponential growth of the federal government’s research spending. In 1945, the US Public Health Service spent $2.4 million on research. In 1960, research spending was $400 million.

“Mary used to say, ‘You can get more money out of the government in one day than you can get by going door-to-door for ten years,”‘ recalls Helene Brown, a long-time friend of Lasker’s.

In 1971, when ACS was interviewing candidates for the job of a Washington lobbyist, one candidate, Nathaniel Polster, recalled a two-round interview.

First, he met with the society’s executive vice president, then he was sent to Mrs. Lasker’s apartment overlooking the UN. “I spent a good piece of the afternoon there,” Polster said to The Cancer Letter. “As far as I was concerned, she was doing the hiring.”

Once Polster got the ACS contract, Mrs. Lasker took it upon herself to acquaint him with her views on how Washington works and to take him on lobbying rounds on Capitol Hill.

Mrs. Lasker’ lesson No. 1: “If you can’t get it on a three-by-five-inch filing card, you’ve lost the message.”

Doing the rounds with Mrs. Lasker, Polster was struck by the depth of her relationships with House and Senate members. For instance, he learned that Mrs. Lasker had encouraged Tip O’Neill to go on medication for his hypertension.

“She walked into O’Neill’s office and said, ‘Are you taking your pills?”‘ Polster recalled.

“And O’Neill said, ‘Damn right I am,’ and pulled the pills out of his desk.”

Campaign contributions were only one part of Mrs. Lasker’s Capitol Hill strategy. Her own contributions were relatively small, usually between $500 and $1,000, which she gave to Democrats and, as she put it, “even Republicans.” (“There are a few good ones,” she used to say.)

However, if a politician was useful to her, Mrs. Lasker was known to make introductions to other donors, whose contributions added up to a far greater sum. “You have to remember, this was before political action committees,” said Victor Weingarten, a former White House aide who ran Lyndon Johnson’s campaign to beautify America.

“She got a lot of leverage out of a small amount of money,” Weingarten said to The Cancer Letter. “It would be difficult for someone to recreate that kind of power today.”

When she tracked bills, Mrs. Lasker was anything but circumspect. “She would come to markups, and she would either get the first seat in the front row or she would stand up so nobody could miss her,” said Lierman, former staff director of Senate Appropriations Committee.

A grand dame with a bouffant hairdo, wearing a sable coat, is easily noticed anywhere, especially at markup sessions closed to the public. However, no session was closed to Mary Lasker, former Capitol Hill staff members recalled. Making such appearances took audacity, but even greater audacity would have been required to have her removed.

“Whenever people asked Mary why she lobbied, she would say, ‘It’s my money. I have a right to help determine how it’s spent,”‘ said Lierman.

Mrs. Lasker took a more than casual interest in what was going on at NCI.

“When I first became director of the Div. of Cancer Treatment, it did not take her long to call me for an appointment,” recalled Vincent DeVita. “I was a brash young man then, and no philanthropist, no matter how well thought of, was going to tell me what to do.

“But she came into my office, and I saw immediately that she was a person who made sense,” DeVita said to The Cancer Letter. “I was a convert within minutes.”

Chief Obsession Was A Cancer Vaccine

“Mrs. Lasker, $200 million is a lot of money,” DeVita said while accompanying her on Capitol Hill.

Not to worry, Mrs. Lasker replied. “You are going to get half of what you are asking for.” Indeed, that year, NCI received $100 million over the President’s budget.

Mrs. Lasker’s chief obsession was finding a vaccine that would eliminate cancer. Once, in 1981, Kristin White, a reporter, sent her an advance copy of a news story on the discovery of the HTLV-1 virus at the NCI laboratory directed by Robert Gallo.

“You realize, of course, what this means,” Mrs. Lasker said in a telephone call to White. “It means there will be a cancer vaccine.”

To accelerate that development, Mrs. Lasker organized a seminar of leading scientists to discuss the implications of the discovery, then scheduled a lobbying trip to Washington. “I am going to speak to Mrs. Reagan, and I am going to take her to NIH and meet with Dr. Gallo,” Mrs. Lasker said to White.

Weeks passed and White heard nothing of Mrs. Lasker’s meeting with the First Lady. Finally, White picked up the phone.

“Mrs. Reagan is not interested in science,” Mrs. Lasker said. “Her father was a surgeon.”

Following this condemnation of the First Lady and surgeons, Mrs. Lasker apparently felt obligated to add something nice:

“But Mrs. Reagan is a wonderful housekeeper. I have never seen the White House look so pretty,” Mrs. Lasker said.

Mrs. Lasker’s own housekeeping strategies were something of an amusement to White.

“Whenever I would go to Mary’s for lunch, we would have a soufflé and a dainty salad-a ladies’ lunch,” White said to The Cancer Letter. “But whenever men were present, there would be a magnificent mixed grill.

“Marywas a little sexist and thought men needed meat. In many ways she was a woman of the 19th century.”

Hence, the paradox of Mary Lasker : a lady of the 19th century at ease with the concepts of the 21st.

“She Had Nothing To Gain”

Being hired by Lasker was akin to being chosen for service by the queen.

Once in 1981, an airline ticket mysteriously appeared in Lierman’s mail. Just a ticket. No explanations.

“I really did not know what it was for,” said Lierman, who at the time was working for a venture capital and real estate firm.

A day later, Lierman got a call from Mrs. Lasker, who was staying in California. “You are about to receive some airline tickets from me in the mail,” she said. “I’d like you to come to see me.”

“If you believe in fate, that’s how my path crossed with Mary Lasker,” Lierman said.

Lierman took the job, which he eventually developed into the National Coalition for Cancer Research.

“I think the singular reason Mary had such impact was that she had absolutely nothing to gain from doing what she was doing,” Lierman said. “Here is a wealthy woman who could easily have spent her years in the south of France having a wonderful time, and instead she devoted her life to the struggle to conquer disease and disability.

“At a time when America has few heroes, she was a giant.”