Gerald E. Hanks was a giant in the world of radiation oncology and oncology in general. It isn’t often that we can say this and probably understate a person’s significance and influence, but Jerry was one of those people. He died on Dec. 20, 2017, at the age of 83.

For those of us who were privileged to know him, work with him, learn from him and call him a friend, he will truly be missed. For many of us, caring for patients and hopefully curing their cancer is more than enough for our careers. But for Jerry, this was just the beginning. 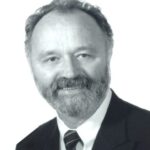