The following article was published on April 8, 2019, in the MUSC Hollings Cancer Center news center. View the original article here.

Describing Senator Ernest “Fritz” Hollings’ tireless efforts to ensure that South Carolinians had access to high-quality health care, leaders at the Medical University of South Carolina paused to reflect on the significance of that legacy.

Sen. Hollings, who died early Saturday at age 97, was a former U.S. senator and South Carolina governor. He served in Washington, D.C., for nearly 40 years.

MUSC President David J. Cole, M.D., FACS, described Sen. Hollings as a generational statesman and tireless advocate for the people of South Carolina. “He leaves an enduring legacy for South Carolina and the nation,” he said.

“One dimension of his legacy will certainly be his determined efforts to assure that all South Carolinians have access to high-quality health care. The impact of the senator’s unwavering vision and commitment can be seen through the transformative work of the dedicated staff of the Hollings Cancer Center – one of only 70 National Cancer Institute-Designated Cancer Centers in the nation.”

He added, “Our hearts and prayers are with his loved ones and those, who along with the MUSC family, mourn the passing of this great man and leader.”

A visible part of his legacy is Hollings Cancer Center. Sen. Hollings not only worked to secure the funding that was needed to establish the center, he also worked over the long term to ensure that federal investment in biomedical research was available. He collaborated with MUSC leaders to attract some of the world’s best physicians and researchers.

In addition to these efforts, Sen. Hollings helped lead the congressional effort to develop the Community Health Center program, which brings medical care to poor and underserved areas. He also authored legislation creating a nationwide program to screen women for breast and cervical cancer and worked with other senators on the appropriations committee to double funding for the National Institutes of Health.

Hollings Cancer Center Director Gustavo Leone, Ph.D., said Sen. Hollings was an amazing man with the vision to know what the impact of having a quality cancer care center would mean to South Carolinians, not only in gaining access to quality care but also in the recruitment of researchers to focus on relieving the cancer burden specific to the state.

“With grateful hearts we remember Sen. Hollings’ legacy, and we’re dedicated to fulfilling his vision,” he said. “He single-handedly brought attention from the federal agencies to the clinical care of patients of South Carolina, and then he brought people in the community to rally and support the establishment of Hollings Cancer Center. He was instrumental in the growth of the center, and it eventually becoming an NCI-Designated Cancer Center. Since then, there has been significant growth in the breadth and quality of the science, cancer prevention, clinical care and outreach.”

Someone who has witnessed that growth is Gerard A. Silvestri, M.D., the George C. and Margaret M. Hillenbrand Endowed Chair in thoracic oncology who has been at Hollings Cancer Center for more than 25 years. He was also a friend of Sen. Hollings. “As far as development is concerned, he was always concerned about cancer care in this state and particularly about serving the underserved communities in the state. I can assure you there would be no cancer center and certainly not an NCI-Designated Cancer Center without him. He brought money, external advisors, energy and strategic vision to the center.”

Silvestri described Sen. Hollings as an incredibly likeable politician. “It didn’t matter which party you were affiliated with. He had an amazing ability to remember names and families and where they were from in the state. As a Democrat in a Republican stronghold state, it was a treat to watch him wrangle out deals with both sides of the aisle.”

He fondly recalls the late senator’s charm. “He was a warm person and a great storyteller. He once regaled me about the Kennedys and how he worked tirelessly to help JFK get elected. He was a remarkably devoted family man, and his wife Peatsy was a formidable woman in her own right. Watching the compassionate care he showed her when she became ill is all you need to know about what kind of man he was.”

Without Hollings’ passion and support, Silvestri said the advances Hollings Cancer Center has made wouldn’t have been possible. “Without a doubt, cancer care in this state would be 25 years behind the times without him. There would be no cancer center of this caliber without him,” he said, adding that Sen. Hollings was keen on recruiting from all over the country and would meet with high-value recruits to encourage them to join the cancer center’s team.

“The amount of national funding he was able to garner for our state and the cancer center was millions upon millions of dollars,” he said. “His legacy is that there is no one more deserving of a namesake for a building and center than Sen. Hollings. Others can donate money to have their name put on the building, whereas Hollings built that center from the ground up, brick by brick.” 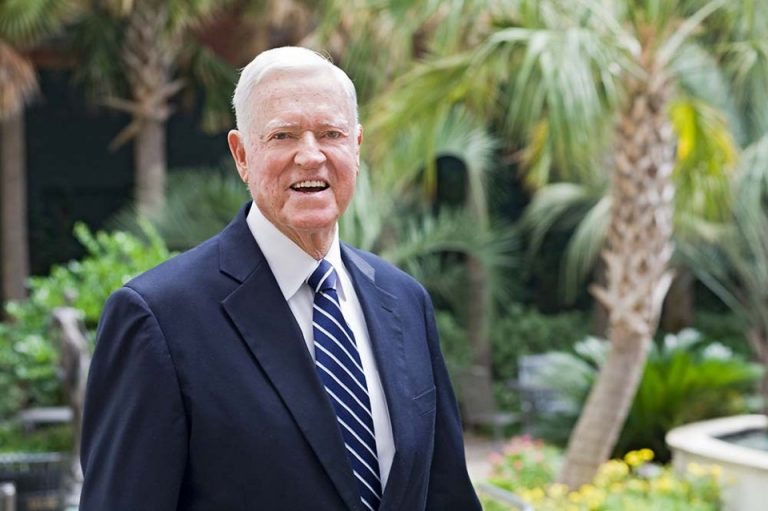