“At St. Jude, the nature of our work requires a bold, ambitious approach. Dr. Nienhuis was a true innovator,” said James R. Downing, MD, president and CEO of St. Jude.  He was a tenacious researcher and unafraid of a challenge. This unique talent and passion for discovery made an indelible mark on pediatric medicine and gene therapy. Our institution and, more importantly, countless patients, continue to benefit from his vision and courage.”

Nienhuis arrived at St. Jude in 1993, lured away from his posts as chief of clinical hematology and deputy clinical director at the National Institutes of Health’s Heart, Lung, and Blood Institute. Attracted by what he called “the extraordinary quality” of St. Jude,” he admitted that, “Once I was here for about half an hour, I realized that this was the job I would really like to do.”

Chuck Sherr, MD, PhD, was on the search committee that recruited Nienhuis to St. Jude.

“When our committee recommended Art’s candidacy to our Board of Governors, some advisers were strongly of the opinion that a non-pediatrician could not serve as the leader of St. Jude, then best known for its respected clinical program in childhood leukemia,” said Sherr, Tumor Cell Biology chair at St. Jude. “However, Art’s credentials as a physician, scientist and administrative program leader ultimately convinced any naysayers that he could do the job.”

Nienhuis oversaw one of the most dramatic eras of growth in the hospital’s history. During what is known as the “billion-dollar expansion,” St. Jude built the Children’s GMP facility; the Hartwell Center; the Memphis Grizzlies House, now known as Tri Delta Place; the Integrated Research Center, which was later renamed the Donald P. Pinkel, MD, Research Tower; and acquired St. Joseph’s Hospital. Nienhuis oversaw creation of the Departments of Developmental Neurobiology and Structural Biology. He also strengthened programs in experimental hematology, bone marrow transplantation, pediatric oncology and infectious diseases by recruiting new department chairs and institutional leaders.

Only months after arriving at St. Jude, Nienhuis championed the idea of establishing a pediatric brain tumor program as a new clinical enterprise supported by a Developmental Neurobiology Department.

Nienhuis was a world leader in the fields of hematology and gene therapy, serving as president of the American Society of Hematology in 1994 and the American Society of Gene Therapy in 2008. When he arrived at St. Jude, he was convinced that gene therapy would one day transform the practice of medicine—allowing clinicians to treat diseases caused by single-gene defects. He proceeded to recruit scientists; establish a program; and build a $34 million GMP facility, where St. Jude could manufacture gene therapy vectors, monoclonal antibodies and vaccines. One project that emerged from that effort was research on X-linked severe combined immune deficiency, or SCID-X1. His work with the late Brian Sorrentino, MD, of St. Jude Experimental Hematology resulted in a cure for that disease, which was published in the New England Journal of Medicine in 2019.

Another transformational project involved the development of gene transfer for the treatment of hemophilia. His work with Andrew Davidoff, MD, St. Jude Surgery chair, led to a clinical trial that transformed life for men with a severe form of hemophilia B by providing a safe, reliable source of the blood clotting protein factor IX.

“He directed us to pursue a unique AAV serotype, different from the one commonly used—a change in direction that was critical for the early clinical trial success,” Davidoff said. “I will forever be appreciative of his willingness to recruit a young surgeon with a desire to also be engaged in basic research, and then to mentor me and help ensure my academic success. He taught me so much about performing rigorous basic research and, specifically, gene therapy.”

Amit Nathwani, MBChB, PhD, director of the Katharine Dormandy Hemophilia Centre at the Royal Free Hospital and a professor at University College London, also attributes his success to Nienhuis’ tutorage and support.

“Under his mentorship, I was able to grow as a scientist and also as a clinician,” said Nathwani, who served as a fellow in Nienhuis’ lab from 1997 to 2000. “What is remarkable about Art Nienhuis is that I am just one among hundreds who he has helped in the same manner throughout his career. His impact, therefore, extends way beyond the NIH and St. Jude in the U.S. to many other parts of the world. I am devastated to hear of his passing, as I feel that I have lost my scientific father.”

In addition to serving as editor of the journal Blood, Nienhuis was a fellow of the American Association for the Advancement of Science. He received numerous awards, including being named by former President Bill Clinton to the National Cancer Advisory Board and receiving the American Society of Hematology’s Stratton Medal, one of the society’s highest honors for an outstanding body of work in hematology. He was also inducted into the Institute of Medicine of the National Academy of Sciences in 2002.

Perhaps one of Nienhuis’ strongest attributes was his willingness to mentor others, shaping the next generation of scientific leaders. For his efforts in that area, the American Society of Hematology bestowed upon him the Mentor Award.

“The mentoring I received from Dr. Nienhuis was incredibly important in my career, as it was Art who gave me leadership opportunities, and then guided me as I tried to navigate the dynamics of the St. Jude and ALSAC Boards,” said William Evans, PharmD, former director and CEO of St. Jude. “Dr. Nienhuis was one of the hardest working people I have known. If there was something important that needed to be done, it did not really matter to him how long it would take or how much effort would be required. He rolled up his sleeves and got to work.”

Most people who are in the field of hematology today were trained by a small number of people, according to Mitch Weiss, MD, PhD, chair of St. Jude Hematology. He noted that Nienhuis trained many pediatric and adult hematologists who now populate the field and lead scientific advances.

“Art is really at the root of a family tree of hematology and hematology research that has grown and sprouted many branches,” Weiss said. “Those branches are the current leaders he trained and their trainees.”

After stepping down in 2004 from his position at the helm of St. Jude, Nienhuis returned to the laboratory to continue his life-saving research. He attained emeritus faculty status in 2016.

Funeral arrangements have been postponed due to the COVID-19 pandemic and will be announced later. Nienhuis is survived by his wife, Corinne Ridolphi Nienhuis; his children, Carol Johnson (Barry), Craig Nienhuis (Julie), Kevin Nienhuis (Janay) and Heather Gallagher (Peter); his stepchildren, Dr. Lee Nichols (Holly), Emily Davis (Frank), Franklin Adams (Liz), Meriwether Nichols (Wende) and Dr. Will Adams (Lindsay). He is also survived by siblings Marilyn (Nienhuis) Timmerman, Wilma (Nienhuis) Van Til, and Robert and Jan Nienhuis; as well as 10 grandchildren. He was predeceased by his wife Sheryl; his sister Dorothy; and stepson Cole Nichols. 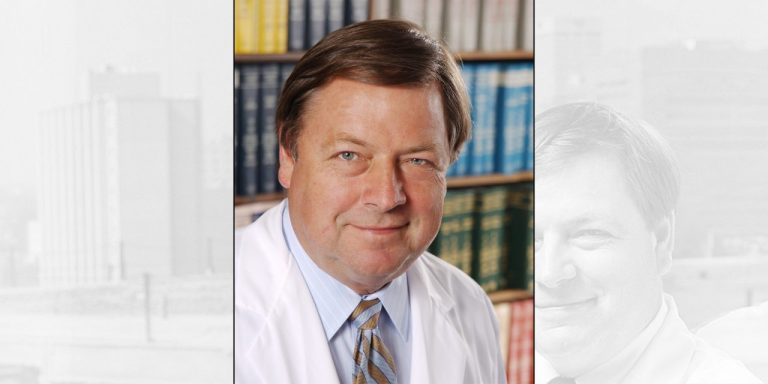 Angela Hartley Brodie, pioneer in the development of breast cancer treatment, dies at 82