Janet D. Rowley, the Blum-Riese Distinguished Service Professor of Medicine, Molecular Genetics & Cell Biology and Human Genetics at the University of Chicago, was a pioneer in connecting the development of cancer with genetic abnormalities.

Before Rowley, few scientists suspected that chromosomal aberrations caused cancer. Beginning in the 1970s, however, she made a series of fundamental discoveries demonstrating that specific chromosomal changes caused certain types of leukemia.

Rowley’s discoveries changed the way cancer was understood, opened the door to development of drugs directed at the cancer-specific genetic abnormalities and created a model that still drives cancer research.

“Janet Rowley’s work established that cancer is a genetic disease,” said Mary-Claire King, professor of genetics and medicine (medical genetics) at the University of Washington and president of the American Society of Human Genetics. “She demonstrated that mutations in critical genes lead to specific forms of leukemia and lymphoma, and that one can determine the form of cancer present in a patient directly from the genetic changes in the cancer. We are still working from her paradigm.”

Nevertheless, she struggled for years to convince fellow researchers. “I became a kind of missionary,” she would often recall, preaching that chromosome abnormalities were important and hematologists should pay attention to them. “I got sort of amused tolerance at the beginning.”

But thanks to her persistence and a long list of related discoveries, her ideas gained credence. Eventually, they brought her widespread recognition, including the Lasker Award, the National Medal of Science and the Presidential Medal of Freedom.

“Janet Rowley is a hero to many, including me,” said Brian J. Druker, director of the Oregon Health & Science University Knight Cancer Institute. “Her groundbreaking work on the identification of the reciprocal translocation between chromosomes 9 and 22 in patients with chronic myelogenous leukemia allowed the development of the life-saving treatment Gleevec for this disease.”

Her work also had a powerful influence on the research of other scientists.

“Janet Rowley was a pioneer in what is now called ‘translational research,’ the direct application of laboratory studies to understanding and treating human disease.” said Richard L. Schilsky, a former UChicago colleague and now chief medical officer of the American Society of Clinical Oncology. “She laid the foundation for personalized cancer care and targeted therapy.”

“She developed the Rosetta Stone that has enabled us to begin to dissect leukemias and lymphomas, to understand their progression and how they respond to treatment,” said blood cancer specialist Richard Larson, professor of medicine at the University of Chicago. “Within my practice lifetime, her discoveries have led to the development of medicines that dramatically altered the management of fatal diseases like chronic myelogenous leukemia. We can now treat those patients on an outpatient basis with oral drugs that are well tolerated and highly effective.”

She also had an impact on the relationship between medical research and public policy. President Jimmy Carter appointed her to the National Cancer Advisory Board (1979‑84). President Bill Clinton awarded her the National Medal of Science (1998). From 2002 to 2009, she served on George W. Bush’s President’s Council on Bioethics. In 2009, she stood next to President Barack Obama when he lifted the federal moratorium on funding for stem cell research, and she returned to the Obama White House later that year to accept the Presidential Medal of Freedom.

Rowley was often cited as a strong example of independent thinking and perseverance.

“Janet has been a mentor for her colleagues as well as her trainees and an ongoing example of scientific wisdom and imagination combined with impeccable professional and personal style,” said colleague Michelle Le Beau, director of the University of Chicago Medicine Comprehensive Cancer Center. “She received just about every imaginable honor. Yet she remained breathtakingly humble, giving most of the credit to her colleagues, her students and luck.”

Starting a career and a family

Janet Davison Rowley was born April 5, 1925 in New York City, the only child of Hurford and Ethel Davison. Her parents, both UChicago graduates, moved to Chicago when she was 2. Her father taught retail store management at the college level and her mother taught English in the public high schools.

In 1940, after two years at a Catholic girls’ high school, Rowley, then 15, won a scholarship to enroll in the Hutchins College at the University of Chicago, which combined the last two years of high school with the first two years of college. “The U of C,” she later recalled, “taught me to stick to my convictions if I really thought that I was correct, even when others disagree.”

She completed a bachelor of philosophy degree in 1944 and was accepted into the University’s medical school, but the quota—three women out of a class of 65—was already filled, “so I had to wait nine months,” she said in an interview. “I was only 19 at the time, so it wasn’t a great tragedy.”

On Dec. 17, 1948, at age 23, she graduated from medical school. The next day, she married fellow medical student Donald Rowley, who would become a professor of pathology at the University of Chicago. They completed their internships at the United States Public Health Service’s Marine Hospital in Chicago in 1951 and had four boys. She spent the next 20 years raising them while working three days a week at various sites, including a Chicago clinic for children with Down syndrome, a genetic disorder caused by an extra chromosome 21.

Her interest in chromosomes and cancer gained focus in 1962, after a year at Oxford University, where she learned newly developed techniques of chromosome analysis. Back in Chicago, Leon Jacobson, a colleague and mentor, suggested she apply those techniques to the study of chromosomes from patients with leukemia. He offered some laboratory space, a microscope and a salary of $5,000 a year. For the next decade, she labored over the microscope, searching amid the seeming genetic chaos of leukemic cells for consistent chromosome abnormalities.

She made her first big discovery at home. After a second sabbatical in Oxford from 1970 to 1971 to learn new staining techniques to highlight the different stripes or “bands” on chromosomes, Rowley began to photograph the chromosomes of leukemia patients using the fluorescence microscope.

She would take the pictures home to examine. Her children often teased her about getting paid to play with paper dolls as she sat at their dining room table, cutting each chromosome out of the photographs and carefully arranging them in pairs.

In the spring of 1972, in her Hyde Park home, Rowley “lined up the chromosomes from leukemia cells on a table and told my kids not to sneeze.”

She noticed that the chromosomes of a patient with acute myeloid leukemia (AML) had two abnormalities. Chromosomes 8 and 21 appeared to have made a trade. Part of 21 had broken off and moved to chromosome 8, and part of 8 had moved to chromosome 21—an exchange now known as a “translocation.” When she looked at more patients with this same kind of leukemia, she saw the same process.

Later that year she noticed that patients with a different disease, chronic myelogenous leukemia (CML), had a different translocation. One end of chromosome 22 had been exchanged for a piece of chromosome 9. Because of this transfer from one chromosome to another, important genes that regulated cell growth and division were no longer located in their normal position, resulting in uncontrolled cell growth of cancer.

The two consistent translocations—one in AML and one in CML, both published in 1973—argued that such translocations were tied to specific types of leukemia, but because the chromosomes of patients with either AML or CML could be highly variable, many scientists remained skeptical. In 1977, Rowley and colleagues identified a third chromosome example, the 15;17 translocation that causes acute promyelocytic leukemia, a rare disease but one where every patient had the same genetic flaw.

“That made me a believer,” she later recalled. “That was the frosting on the cake.”

Understanding the 9;22 translocation eventually led to the development of the drug imatinib (Gleevec), one of the most successful targeted cancer therapies to date. Gleevec blocks the function of the abnormal protein produced by that translocation. Her discovery of the acute promyelocytic leukemia translocation led to effective treatment with high-dose retinoic acid, a vitamin A derivative.

“This was a time of excitement and wonder that is hard to describe,” she wrote in an essay. At age 47, after publishing the AML and CML studies, her 17th and 18th publications, her career took wing. Her resume now lists 508 publications in leading scientific journals. More recent discoveries include cloning a gene rearrangement that occurs in many infant leukemias and the recognition of deletions of parts of chromosomes 5 and 7 associated with therapy-related leukemia in patients previously treated with particular anti-cancer drugs.

The awards began in the early 1980s, including the Lasker Award and the National Medal of Science, the nation’s highest scientific honor, in 1998; the Presidential Medal of Freedom, America’s highest civilian honor, in 2009; a Lifetime Achievement Award from the American Association for Cancer Research in 2010; the Japan Prize for Healthcare and Medical Technology in 2012; and the Albany Medical Center Prize in 2013. She has received honorary doctor of science degrees from 14 institutions, including Oxford, Harvard University, Yale University, the University of Pennsylvania and Dartmouth College.

She was elected as a member of numerous scientific and honorary societies including the National Academy of Sciences, the Institute of Medicine, the American Philosophical Society and the American Academy of Arts & Sciences.

An inspiration for the next generation

Rowley, who continued to bicycle daily from her Hyde Park home to her laboratory in her late 80s, routinely advised young investigators not to give up.

“Take risks,” she had said. “Do something different if it looks interesting… I didn’t do anything noteworthy until I was 50. Success often involves a great deal of luck. Some people don’t like to hear that because it means there are things out of their control. But that’s the way it is.” 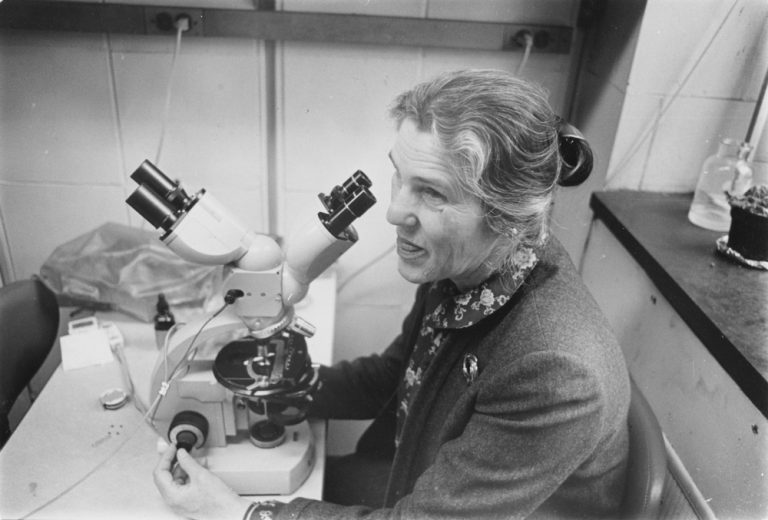 “Take risks. Do something different if it looks interesting… I didn’t do anything noteworthy until I was 50. Success often involves a great deal of luck. Some people don’t like to hear that because it means there are things out of their control. But that’s the way it is.”

Robert ‘Bob’ Perry: A Scientist Ahead of His Time