Thomas Dougherty, PhD, wanted to help find a cure for cancer, so in 1970 he quit his job with the DuPont chemical company to join Roswell Park Cancer Institute (RPCI). It was a crazy idea: He knew very little about cancer. He was a chemist who specialized in photochemistry — the process that causes chemicals to change when they’re exposed to light.

Five years later, Dr. Dougherty published a paper showing that tumors could be killed by using laser light to activate light-sensitive chemical compounds called photosensitizers. It might sound like science fiction, but the treatment, called photodynamic therapy (PDT), is now used around the world.

Although PDT was first discovered more than a century ago in Germany, researchers had failed to find ways of using light-sensitive compounds to treat disease until Dougherty’s breakthrough. Dougherty successfully treated cancer with PDT in preclinical models for the first time in 1975. Three years later, he conducted the first controlled clinical study in humans.

In 1994 the FDA approved PDT with the photosensitizer Photofrin® for palliative treatment of advanced esophageal cancer. Today it is also FDA-approved for the treatment of specific types of lung cancer and Barrett’s esophagus, a condition that can lead to esophageal adenocarcinoma. Roswell Park now offers PDT using next-generation photosensitizers and provides off-label treatment of gynecologic malignancies, head & neck cancer and dysplasia, and certain skin cancers.

After selling his company, Photofrin Medical, Inc., to Johnson & Johnson in 1984, Dougherty used the proceeds to establish The Oncologic Foundation of Buffalo, which initially funded PDT research at Roswell Park.

“Tom’s foundation gave me my first grant, which allowed me to begin to investigate the role of PDT in anti-tumor immunity,” recalls Sandra Gollnick, PhD, now Director of Roswell Park’s Photodynamic Therapy Center. “He was a great man, a visionary and a good friend.”

The foundation later expanded its mission to support initiatives at Canisius College, the American Brain Tumor Association, and Hauptman Woodward Medical Research Institute. It also funded a program that taught University at Buffalo medical students “how to deal honestly and compassionately with terminally ill patients,” in Dougherty’s own words.

A graduate of Canisius College, Dr. Dougherty earned a PhD in chemistry from The Ohio State University. He received numerous accolades and awards for his work, including the Lifetime Achievement Award from the American Society for Photobiology. He was the author or co-author of more than 200 publications and held more than 50 patents.

Nancy Oleinick, PhD, Professor Emerita of Radiation Oncology at Case Western Reserve University School of Medicine in Cleveland, remembered Dougherty as “a superb scientist, a gentleman, a visionary and a cheerleader for PDT.” Added David Kessel, “Tom certainly left the world a much better place for his being part of it. He was one of the ‘good guys’ of whom there can never be enough.” 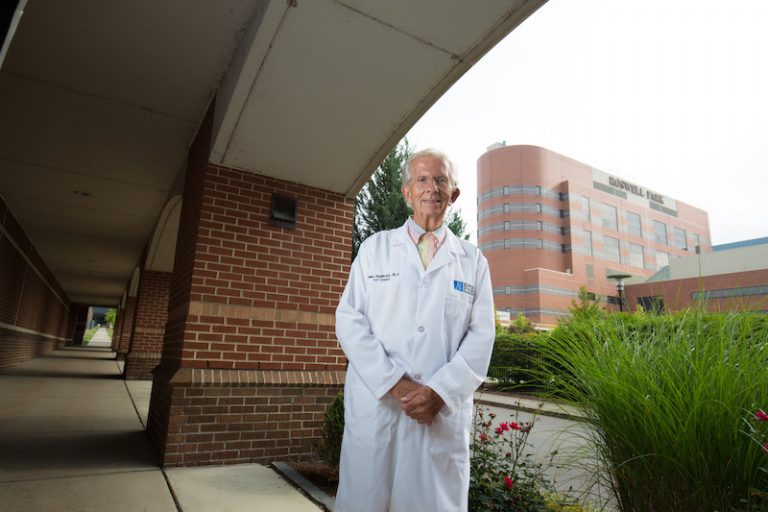