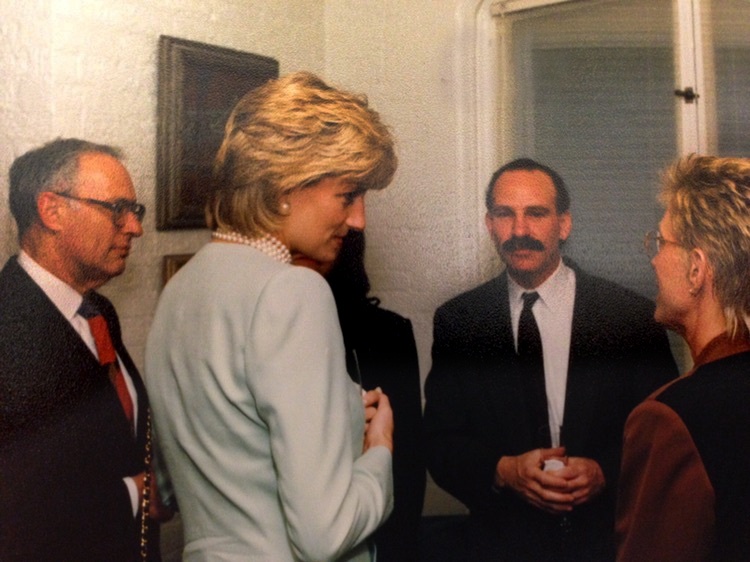 On June 4,1996, Diana, Princess of Wales, swept into Chicago for a 48-hour visit to raise money for Northwestern University, Gilda’s Club, and the Royal Marsden Hospital, and all we did was run a paltry item in the “In Brief” section:

It wasn’t even the lead brief.

A tidbit about the National Surgical Adjuvant Breast and Bowel Project’s successful re-competition of NCI grants for the chemoprevention and therapy was deemed more important and ran above it.

Yes, Norman Wolmark, chairman of NSABP, was prioritized above Diana, Princess of Wales. Of course, the Diana story was thoroughly covered by celebrity-oriented outlets, and all Norman had was The Cancer Letter.

To plot Diana’s Chicago visit on the timeline—for those watching the Netflix series The Crown—at the time the People’s Princess was separated from Prince Charles, but not yet divorced. She died in an automobile accident not quite a year and two months later, on Aug. 31, 1997.

One reminder of the 1996 visit is the Diana, Princess of Wales Professorship at Northwestern.

The chair was first held by Craig Jordan, whose research led to widespread utilization of tamoxifen for the treatment and reduction of risk of breast cancer.

In August 1998, days before the FDA Oncologic Drugs Advisory Committee vote that resulted in approval of the risk reduction indication for tamoxifen, Jordan reflected on Diana’s visit:

“Diana being British, me being British, tamoxifen being a British drug; it’s the symmetry. [It was] like the planets aligned,” Jordan said to Chicago Tribune.

The Princess Diana chair at Northwestern is now held by Daniela E Matei, chief of reproductive science in medicine in the Department of Obstetrics and Gynecology at Northwestern.

In 2016, at Matei’s investiture as the Diana, Princess of Wales professor, Ann Lurie, president of Ann and Robert H. Lurie Foundation and Lurie Holdings Inc. recalled the day Diana came to town, inspiring her to establish the professorship.

“Back in 1996, I remember that Diana urged cancer researchers at Northwestern to avoid the other ‘c’ word—complacency—in their work. Today, we have adopted ‘urgency’ in its place,” Lurie said. “I am happy that through this professorship that exists in perpetuity I could help to leverage the recruitment of someone like Dr. Matei.”

I might as well just say it: I was the guy who screwed up by failing to do a proper story 25 years ago.

Accepting full responsibility for this failure of news judgment, I called Steven Rosen, former director of Northwestern University Lurie Cancer Center, who is now the provost and chief scientific officer at City of Hope and director of Beckman Research Institute.

Article
June 4–6, 1996
Diana, Princess of Wales, swept into Chicago for a 48-hour visit to raise money for Northwestern University, Gilda’s Club, and the Royal Marsden Hospital

An excerpt from Diana’s remarks at the breast cancer symposium, June 5, 1996:

Today is an important opportunity to draw the world’s attention to the disease, because there are few subjects which are more likely to raise anxiety and fear than cancer—for some it remains the dreaded “C” word. Most of us have known people who have suffered terribly at the hands of this disease. It seems to strike out of nowhere, destroying lives almost at will, leaving devastation in its wake. Amongst all the diseases cancer has, justifiably, the very worst reputation.

And yet in the midst of such negative circumstances there is, today, an amazing amount of hope; yes, hope. Ladies and gentlemen, that hope is seated before our very eyes this morning. In so many of the seats before me I see specialists who bring hope, pioneers whose work will soon transform the lives of countless individuals bringing hope to those who might describe themselves as hopeless today.