Angela Hartley Brodie, pioneer in the development of breast cancer treatment, dies at 82

Angela Hartley Brodie, professor emeritus in the Department of Pharmacology at the University of Maryland School of Medicine and a scientist whose groundbreaking research is considered among the greatest advances in treating breast cancer, died of complications from Parkinson’s disease at her home in Fulton, MD. She was 82.

Brodie pioneered the development of aromatase inhibitor. Her work developing aromatase inhibitors was a paradigm-shifting effort that began in the 1970s and was designed to reduce the level of the estrogen in the body and thereby block the growth of cancer cells. 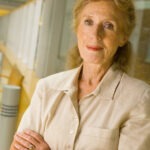