Yarbro was one of the cancer experts called to testify before Congress to speak in favor of the draft legislation that became the National Cancer Act of 1971. At that time, he was founding director of the department of medical oncology at Philadelphia’s American Oncologic Hospital (now Fox Chase Cancer Center), and he noted that the accomplishments of many of the leading cancer research centers—including Roswell Park, MD Anderson, and Memorial Sloan Kettering—were due more to the support of state legislators and private philanthropists than the medical establishment.

He further made the point that cancer studies were underrepresented in medical research presentations and publications. He pointed out that between 1966 and 1971, only 5% of the papers presented at the annual meetings of the American Society for Clinical Investigation dealt with cancer while 17% of U.S. population died of cancer, and during the same period, 45% of the papers presented at the meetings dealt with heart disease and related cardiovascular diseases when 40% of deaths at the time were due to heart disease.

We were fortunate to have spoken with Yarbro and his wife, Connie, a founder of the Oncology Nursing Society, shortly before his death when researching our book, Centers of the Cancer Universe, due to be released next year during the 50th anniversary of the National Cancer Act. 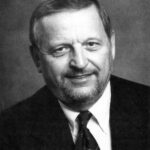